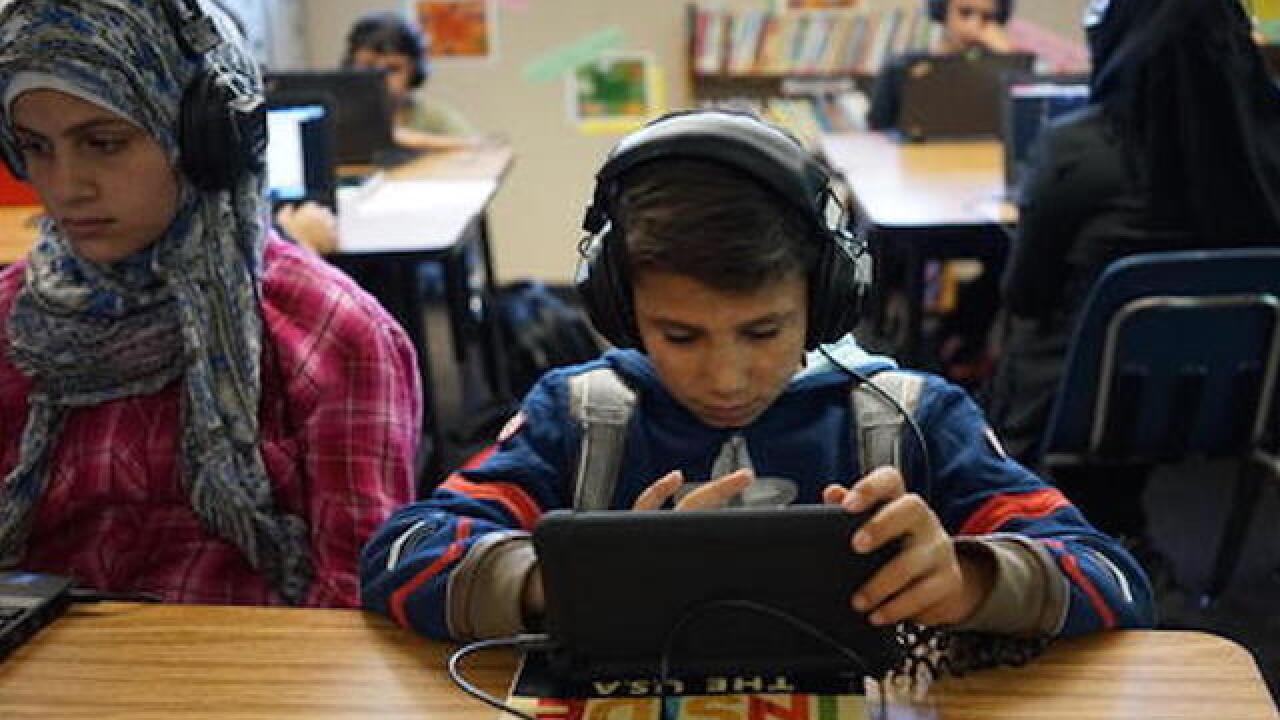 Christine Armario
<p>In this Tuesday, Oct. 4, 2016 photo, students Samah Hussein, 13, and Abdulraheem Qadour, 11, study on their laptops in a class filled with refugee children at Cajon Valley Middle School in El Cajon, Calif. According to the U.S. State Department, nearly 80 percent of the more than 11,000 Syrian arrivals over the past year were children. Many of those children are enrolling in public schools around the country, including Chicago; Austin, Texas; New Haven, Connecticut; and El Cajon, which received 76 new Syrian students the first week of school. (AP Photo/Christine Armario)</p>

EL CAJON, Calif. (AP) — Seated at his desk at a suburban San Diego middle school, 12-year-old Abdulhamid Ashehneh tries not to let his mind wander to the painful memories of his life in civil war-torn Syria.

His father disappeared suddenly four years ago and, the family believes, was killed. Months later, Abdulhamid's mother boarded a bus with her six children, the youngest 2, and fled to Jordan, the sound of bombs ringing in the distance.

"I think about my Dad a lot," Abdulhamid said recently after practicing English at Cajon Valley Middle School, which has received an influx of Syrian children. "I wish he would come back."

Abdulhamid is like many of the Syrian refugees arriving today in the U.S. Nearly 60 percent of the more than 11,000 Syrian arrivals over the past year were children, according to the U.S. State Department.

That's a larger percentage than some refugee groups, in part because Syrians tend to have larger families and many have managed to stay together despite displacement, according to resettlement agencies helping the families acclimate to the U.S.

Many of those children are enrolling in public schools around the country, including Chicago; Austin, Texas; New Haven, Connecticut; and El Cajon, which received 76 new Syrian students the first week of school.

Syrian children face many of the same challenges as other young refugees — limited English, an interrupted education — but they are somewhat distinct in the level of trauma they have experienced, school leaders and resettlement workers said.

"The truth is, a lot of them have seen some pretty nasty stuff," said Eyal Bergman, a family and community engagement officer for the Cajon Valley Union School District. "But I also see incredible resilience."

In response to the influx, school districts are beefing up English instruction and making extra efforts to reach out to parents unfamiliar with the U.S. school system. In El Cajon, one-on-one orientations introduce families to the school's teachers and staff and show them basics like how to read the district's academic-year calendar.

Some refugee students are enrolled in "newcomer" classes where they are provided intense English instruction before being placed in mainstream classrooms. Others go directly into classes with English-fluent peers but are assigned to smaller groups for individual instruction. Teachers are trained in identifying trauma, and on-site counselors help students who need extra attention.

"I've had students tell me that maybe some of their family members passed away," said Juanita Chavez, a second-grade teacher. "But I think a lot of them just want to focus on here, on learning. A lot of them don't focus on the negative things that have happened to them."

At night, Arabic-speaking staff and teachers hold a "parent academy" where newly arrived moms and dads are given bilingual children's books in English and Arabic and guided on how to help improve literacy at home.

Last November, in response to the deadly Paris attack believed carried out by operatives who fought and trained in Syria, nearly 30 states vowed to deny entry to Syrian refugees.

Resettlement agencies and school staff worry inflamed rhetoric about Muslims and Syrian refugees will trickle into the classroom. A report last year by the California chapter of the Council on American-Islamic Relations found 50 percent of Muslim students surveyed were subjected to mean comments or rumors because of their religion.

"This is a concern of ours, to be watching that they do not feel shunned or stigmatized because of their national origin," said Ellen Beattie, a senior director with the International Rescue Committee.

El Cajon, a city of roughly 104,000 people 15 miles east of San Diego, has become a melting pot of refugees from Uganda to Afghanistan. The first Middle Eastern immigrants were Chaldean Christians fleeing persecution in Iraq in the 1970s. Those earlier, now established waves of migrants are playing a role in helping settle the new arrivals from Syria.

"Most of them tell us the only reason they accepted the whole immigration process is really for their kids," said Anas Kayal, who emigrated to the U.S. from Syria in 2001 and is a physician in San Diego. "They are OK with their own lives being disrupted by the war and crisis, but they are hoping their kids can have a better life."

Watching her children learn English and adapt to U.S. schools has been redeeming for Abdulhamid's mother after two years in Jordan, where she often struggled to feed them and at one point lived in a feeble tent that would blow apart in the wind.

"We're still trying to cope with this emotionally," said Amena Alshehneh, 37. "But it's the reality. We have to face the reality and get on our feet."

As Abdulhamid assimilates, he still pines for his homeland and the life he left behind.

He remembers the Damascus home where he wrestled and practiced reading with his father. He remembers playing soccer and hide-and-seek with his best friend, and wonders what happened to him.

He also thinks about his computer and a remote-control car — cherished toys his father gave him and that he had to abandon.

"I feel so sad I left Syria," said Abdulhamid, whose expression quickly shifts from joy to grief. "Because it's my country. My home."