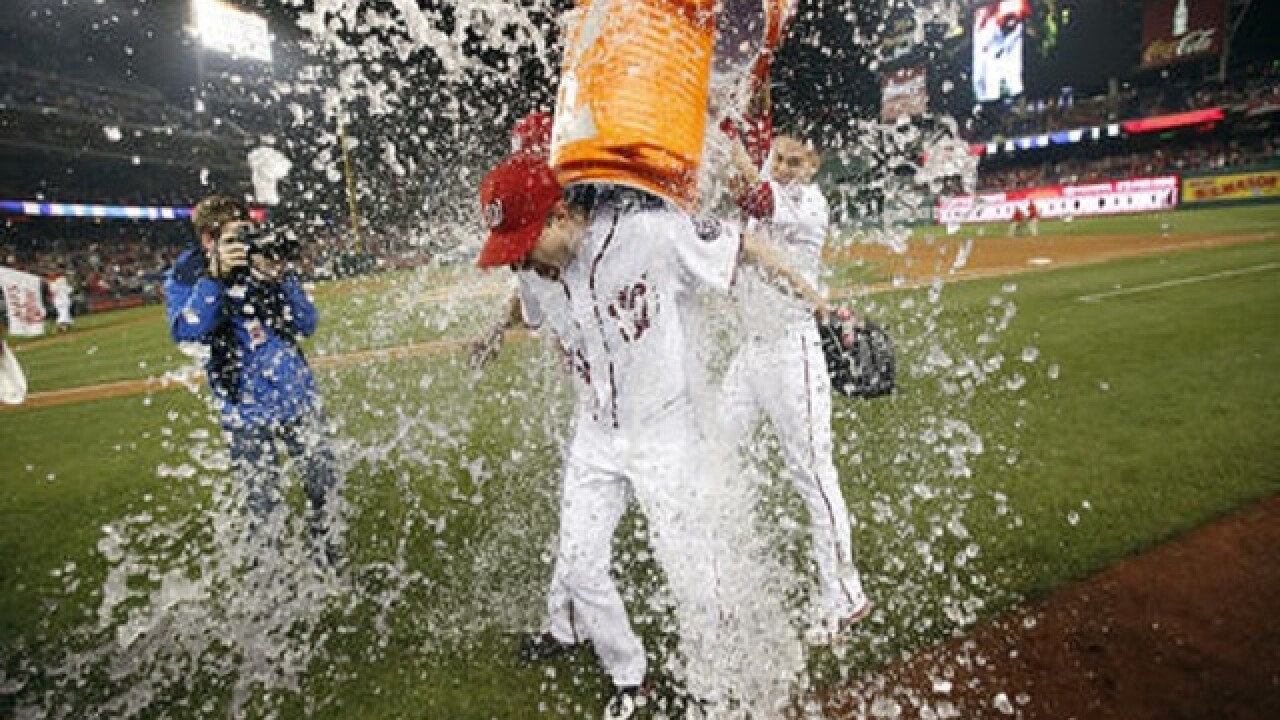 WASHINGTON (AP) — Max Scherzer struck out 20 batters, matching the major league record for a nine-inning game as he pitched the Washington Nationals past the Detroit Tigers 3-2 on Wednesday night.
Scherzer had a chance to break the mark when James McCann stepped to the plate with two outs in the ninth inning. McCann, who whiffed his previous three times up, grounded to third base for the final out.
The breathtaking performance came in Scherzer's first outing against the Tigers, his former team. The ace right-hander, who pitched two no-hitters for Washington last season and struck out 17 in the second one, joined Roger Clemens (twice), Kerry Wood and Randy Johnson as the only big league pitchers to compile 20 strikeouts in nine innings.
Johnson accomplished his feat for Arizona during a 2001 game that went 11 innings. Tom Cheney holds the major league record with 21 strikeouts when he pitched all 16 innings for the Washington Senators against Baltimore in 1962.
"I think it was about the eighth inning when I punched out somebody and they said that was 18, that was the first time I heard the number, so I knew I had a shot at going out for the ninth and 20," said Scherzer, who did not issue a walk all night.
After striking out the side in the eighth, all on called strikes, the 2013 AL Cy Young Award winner was up to 18. He gave up a leadoff homer to J.D. Martinez in the ninth, then blew a 97 mph fastball by slugger Miguel Cabrera for No. 19.
Victor Martinez singled before Scherzer got another All-Star bopper, Justin Upton, swinging at a low slider to tie the record.
That came one pitch after Upton's foul pop landed just beyond the reach of first baseman Ryan Zimmerman and in a camera well.
Scherzer pounded his fist in excitement and then went back to work. McCann, however, grounded an 0-1 pitch to third baseman Anthony Rendon, who threw to second for the forceout.
A giddy Scherzer smiled and yelped as he high-fived and hugged other Nationals players on the field. Then the pitcher was doused by his teammates during a postgame television interview.
"Had to go through some tough, tough hitters there with Miggy and J.D. and Victor and all those guys over there," Scherzer said. "Those guys are unbelievable and they gave me a heck of a time tonight. But to be able to do it against them, it's a feather in the cap."
Scherzer (4-2) threw an astounding 96 of 119 pitches for strikes in a six-hitter for his sixth career complete game. It was his first start against the Tigers since leaving them as a free agent for a $210 million, seven-year contract with Washington before last season.
He outpitched pal Jordan Zimmermann (5-2), a former Nationals teammate who left Washington as a free agent for a $110 million, five-year deal with Detroit before this season.
With the win, Scherzer joined Chicago Cubs right-hander John Lackey as the only active starters to own victories against all 30 major league clubs.
"The fastball really just seemed to work for me tonight," Scherzer said.
Daniel Murphy had three hits, including a double and a pair of RBI singles off Zimmermann. Danny Espinosa homered off Zimmermann in the seventh as Washington took two of three in the interleague series.
Jose Iglesias homered early for Detroit.
After allowing seven runs on four homers in an 8-6 loss to the Cubs on Friday, Scherzer responded with one of the finest outings of his career.
He seemed to pick up steam late.
After Victor Martinez singled and Upton doubled with one out in the seventh, Scherzer got McCann looking and Anthony Gose swinging to escape.
Scherzer followed that by striking out the side in the eighth, with Ian Kinsler staring at a 96 mph fastball at the knees to end the inning.
Zimmermann allowed three runs over seven innings in his return to Nationals Park. The right-hander received a standing ovation from the crowd of 35,695 when he stepped into the batter's box after Iglesias' homer.
Zimmermann briefly backed out and tipped his helmet in appreciation, then became Scherzer's sixth strikeout, going down swinging on a 1-2 curveball.
TRAINER'S ROOM
Tigers: Cabrera was back in the lineup after his pinch-hit single drove in a run in Detroit's 5-4 victory on Tuesday. Manager Brad Ausmus decided to give the slugger a planned off day on Tuesday instead of Wednesday after Cabrera jammed his right knee sliding into second on Monday.
Nationals: Manager Dusty Baker said he doesn't know if RHP Matt Belisle (calf strain) is ready to resume a throwing program. The reliever went on the disabled list April 27.
UP NEXT
Tigers: RHP Mike Pelfrey (0-4, 6.23 ERA) is slated to start the opener of a four-game set against the Orioles at Camden Yards, where he's 2-0 with a 4.41 ERA in his career.
Nationals: Washington will take an off day before beginning a four-game, three-day set against the Miami Marlins. When it's over, the NL East rivals will already have played 10 of their 19 scheduled games this season.
Associated Press 2016