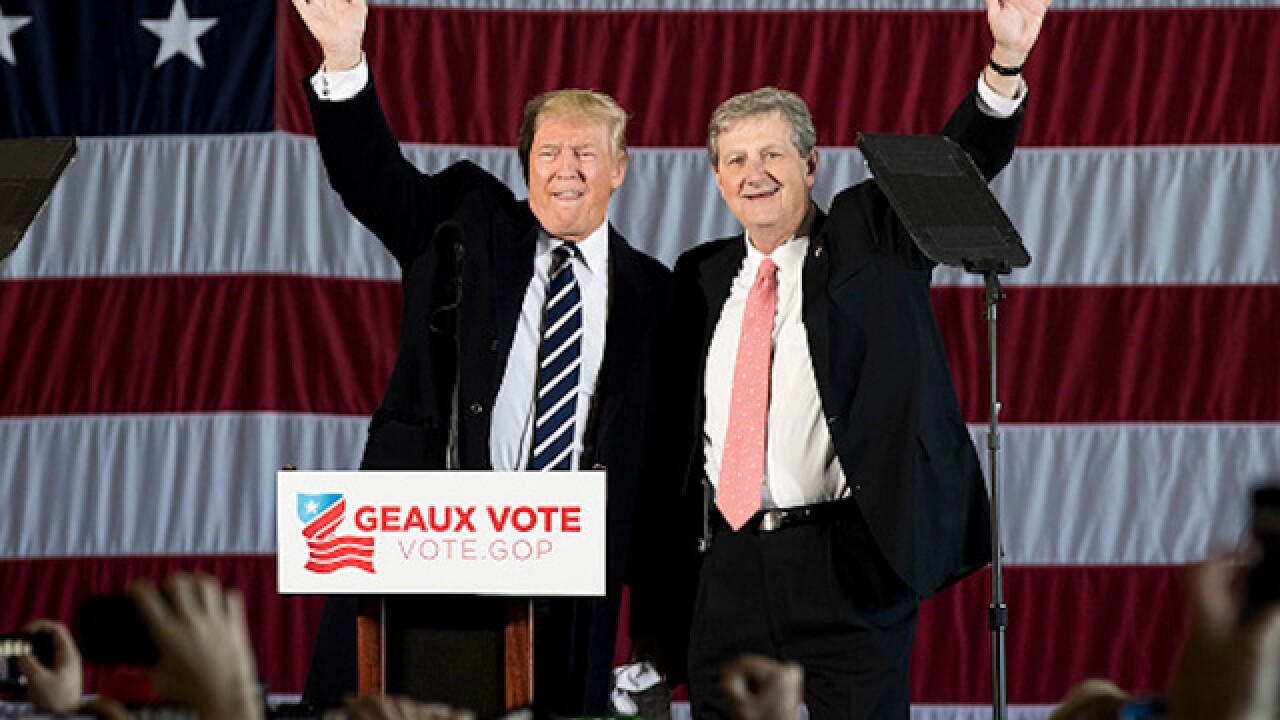 Kennedy had always been the runoff election's front-runner in a state that overwhelmingly supported Donald Trump. He defeated Democrat Foster Campbell, a state utility regulator whose chances were seen as such a long-shot that national Democratic organizations offered little assistance to Campbell's campaign.

Louisiana has an open primary system in which all candidates run against each other. In the contests for the open congressional seats, the November primary ballots were packed with contenders, so the top two vote-getters advanced to Saturday's runoff.

Though Campbell's chance appeared slim, donations for his campaign had poured in from around the country, and several Hollywood celebrities championed his candidacy as a way to bolster resistance to the Trump presidency.

The Senate seat was open because Republican David Vitter decided against running for a third term after losing the governor's race last year. Both men vying for the seat are well-known figures, involved in Louisiana politics for decades.

Kennedy, an Oxford-educated lawyer from south Louisiana, is in his fifth term as treasurer, a role in which he repeatedly drew headlines for his financial clashes with Louisiana's governors.

He sprinkled speeches with examples of government-financed contracts he considered outrageous, like money "to study the effects of Swedish massage on bunny rabbits." In the runoff, he ran a safe, TV-focused effort highlighting his support for Trump and his opposition to the federal health overhaul.

"The good thing about this race is that nobody's going to confuse the two of us," Kennedy said of his opponent. "He's a liberal. I'm a conservative. He supported (Hillary) Clinton. I supported Mr. Trump. He believes government can spend the money you earn better than you can. I don't."

Campbell, a cattle farmer and former state senator from north Louisiana, is a populist who railed against "Big Oil," wants to increase the minimum wage and talks openly about man-made climate change. He pledged that in Washington he "won't be in anybody's shirt pocket."

He's also a Louisiana Democrat — strongly opposed to abortion and supportive of gun rights. He insists he's got a chance to win.

"For 40 years I've been in politics, and I've been able to get crossover votes, independent votes," Campbell said.

Kennedy hit Campbell for supporting Clinton. Campbell called Kennedy a flip-flopper during prior Senate bids, because the treasurer ran in 2004 as a liberal Democrat and the most recent two times as a conservative Republican.

In the 3rd District race, Higgins traded blistering attacks with his fellow Republican opponent, Scott Angelle, a member of the Public Service Commission and well-known public official for nearly 30 years.

Angelle had been the presumed front-runner. But Higgins — a local celebrity known for attention-grabbing Crime Stoppers videos he filmed when he was a sheriff's captain — capitalized on disenchantment with career politicians to defeat Angelle with only a fraction of his money and a bare-bones organization.

In the 4th District, Johnson defeated Democrat Marshall Jones in a competition that was less attack-laden.

Johnson focused on his work on conservative issues as a constitutional attorney and in his two years as a state lawmaker. Jones, also a lawyer, downplayed his party affiliation, running as an anti-abortion, gun-rights Democrat who could work with Trump.

The House seats were open because Republicans Charles Boustany and John Fleming unsuccessfully sought the Senate seat instead of re-election.