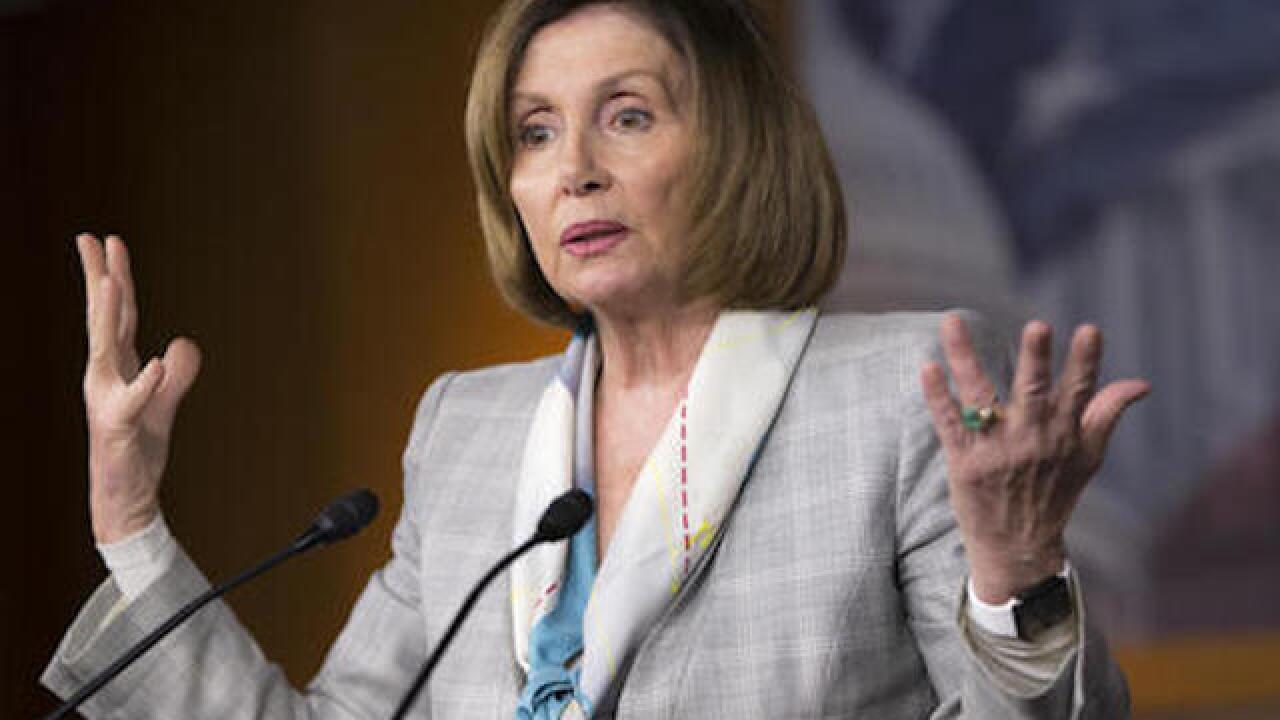 Copyright 2018 Scripps Media, Inc. All rights reserved. This material may not be published, broadcast, rewritten, or redistributed.
J. Scott Applewhite
House Minority Leader Nancy Pelosi, D-Calif., defends Hillary Clinton's use of a private email server in the wake of a State Department oversight report today that stated she broke federal rules, on Capitol Hill in Washington, Wednesday, May 25, 2016. As Congress prepares to get out of town for a week-long Memorial Day recess, Pelosi also said Republicans in Congress are dysfunctional and are responsible for the lack of funding to combat the Zika virus. (AP Photo/J. Scott Applewhite)

WASHINGTON (CNN) -- House Minority Leader Nancy Pelosi cast doubt Tuesday on congressional Republicans' and President-elect Donald Trump's plans to rollback Obamacare.
"I don't think they are going to repeal the Affordable Care Act," Pelosi told a group of reporters in her office on Capitol Hill Tuesday.
Trump and congressional Republicans have said one of their first priorities in 2017 will be to dismantle the current health care law. They say they plan to retain some of the most popular planks of the law, such as barring insurers from denying coverage to those with pre-existing conditions and allowing those who want to remain on their parents' health care plans until age 26.
But Pelosi argued that the practical effect of leaving those provisions in place and peeling away the other parts of the law won't work because of the costs.
"You can't keep them. You can't afford them because the cost would be so astronomical," Pelosi said, noting the motivation for creating the system was to address the spiraling costs of medical care. Defending Obamacare's structure, she added: "it's all cheaper the more people that are in the pool. Everybody is healthier the more people that are in the pool."
"They say they're going to keep 'this, this and this,' and they'll find out that they will do it as at a cost to the policy holder," she said of Republicans' intentions, stressing that "cost to the policyholder is one of the thing that they are sensitive to."
The House minority leader said there have been no discussions to date with GOP leaders about their plans to overhaul the law, but said there could be some collaboration.
"We know that there were many compromises made to pass the Affordable Care Act. There can be other compromises made to preserve it. And depending on how far that goes that may be something that we can work together on, because we are legislators," she said.
But the California Democrat, who helped muscle through the law in 2009 without any Republican votes, made it clear that she and her colleagues will continually remind the public about the consequences of changing the health care law or entitlement programs such as Medicare or Social Security that provide support for millions of Americans.
"We will fight them on their removing the guarantee of Medicare," Pelosi said. She pointed that the upcoming 2017 session will be similar to the fights that Hill Democrats had with President George W. Bush in 2005 and 2006 when he proposed privatizing Social Security.
"It is our responsibility and opportunity to make those differentiations and we will," Pelosi said.
After John Kerry's loss in 2004 some were predicting a "permanent Republican majority," she added, but she and other Democrats crafted a message to highlight the party's efforts to protect programs that helped middle-class voters.
"We see an enhanced role," Pelosi said of congressional Democrats, arguing that after eight years of President Barack Obama in the White House the ability of Democratic leaders message was diminished.
She said that she and her Senate counterpart, Chuck Schumer of New York, will be making the contrast with the GOP and the policies.
"Our big leverage is with the public," the House minority leader said.
Pelosi alluded that those who voted for Trump with a focus on the economy may find out that some of the policies his administration could put in place may not be in line with what they really wanted.
"Someone used the analogy that it's like telling someone they married the wrong person or their art is fake," she said, adding, "They bought it. They'll find out sooner or later whether they made a mistake."
"Right now they don't want to be told that they made a mistake. But when it comes to their Medicare, their job, their minimum wage, and the rest of that -- their Social Security -- they'll see whether they got what they thought they were buying," Pelosi said.
She said women in particular may be surprised by the Republicans' efforts addressing abortion.
"They don't think that Roe v. Wade is at risk, but it is," she added.
The-CNN-Wire
™ & © 2016 Cable News Network, Inc., a Time Warner Company. All rights reserved.
WMAR