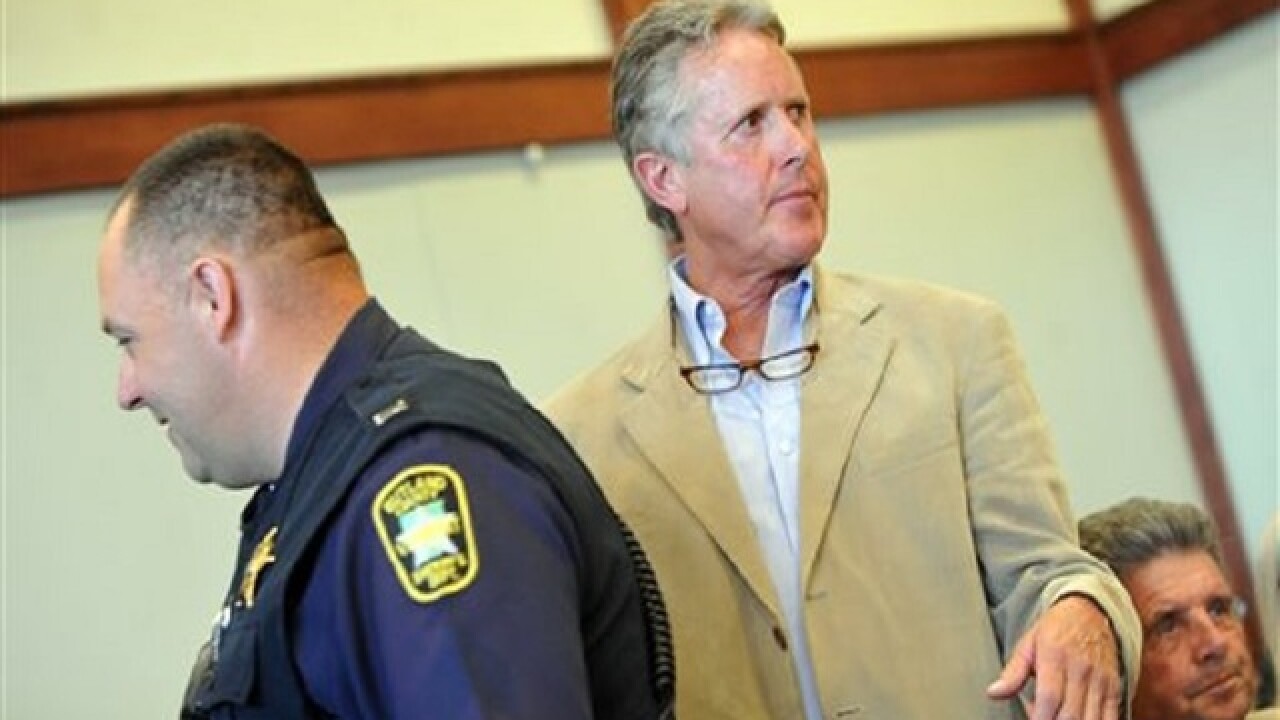 Anthony Edwards
<p>Craig Mosher appears in court on Monday, June 6, 2016, in Rutland, Vt. Mosher, whose loose bull wandered onto a road and was hit by a car, killing the driver, is facing an involuntary manslaughter charge, prosecutor said, and farmers are worried about the harm a conviction could do to the state's agriculture economy. (Anthony Edwards/The Rutland Herald via AP) MANDATORY CREDIT</p>

By: Associated Press
Posted at 10:06 PM, Jun 06, 2016
RUTLAND, Vt. (AP) — A man whose loose bull wandered onto a road and was hit by a car, killing the driver, is facing an involuntary manslaughter charge, prosecutor said, and farmers are worried about the harm a conviction could do to the state's agriculture economy.
Farmers and friends packed a legal proceeding at a courthouse Monday in support of bull owner Craig Mosher, whose lawyer has called the car crash "a horrible accident."
Some farmers fear Mosher's prosecution could set a precedent that stands to hurt the state's economy, whose staples include dairy farming, artisanal foods and forestry. They would like to see the charge, which carries a sentence of up to 15 years in prison upon conviction, dropped.
"Animals don't get out that often. When they do, there could have been 100 different reasons why that animal got out," said Joseph Tisbert, president of the Vermont Farm Bureau.
Mosher, who owns an excavation company, was indicted by a grand jury in April and has pleaded not guilty.
According to court documents:
On July 31, 2015, a milk truck driver nearly hit the bull in Killington, recognized the bull was Mosher's and went to Mosher's house to tell him about it.
The driver said he banged on Mosher's door and blew his truck's air horn to alert Mosher. The driver said Mosher opened an upstairs window and he told Mosher he had almost hit the bull. The milk truck driver said he didn't see Mosher come outside after a few minutes so he called police.
Mosher later told a trooper he went to look for the bull on his property but couldn't find it, went home and fell asleep.
The crash, which happened about 15 minutes after the milk truck driver called police, killed 62-year-old Jon Michael Bellis, of Woodbridge, Connecticut. His car hit the bull and then slammed into a tree. His wife was in the car but survived.
The bull was killed.
The indictment accuses Mosher of acting with criminal negligence after he learned the bull was loose and failed to contain it or warn others of the danger.
Tisbert said he and other farmers are worried landowners might be less willing to lease pastures.
"This could inadvertently affect the tourism industry of Vermont as farmers and landowners become more concerned about criminal and increased insurance liability," he said.
A civil lawsuit had been settled in the case, but attorney Jerome O'Neill, who represents Bellis' wife, said he couldn't discuss details of it.
Rutland County state's attorney Rose Kennedy said that police had responded to reports of Mosher's bull in the roadway three times and out of its pasture once in June and July 2015.
Farmers' concerns are misplaced, said O'Neill, who's from Burlington. Mosher's fencing wasn't well maintained, and two bulls were getting out regularly, he said.
"No farmer wants to let his or her animals run out in the road," he said. "It's going to cause people serious injury or death, and they're going to lose the animal."
WMAR