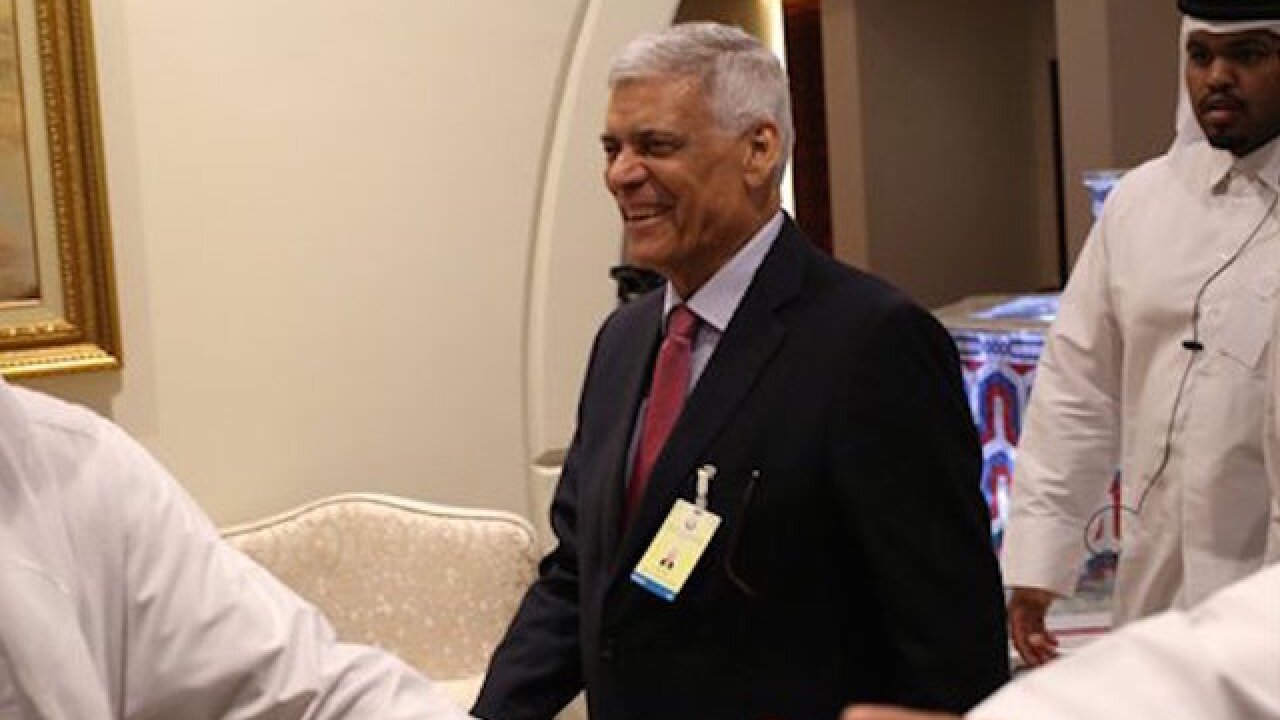 Jon Gambrell
<p>Abdallah Salem el-Badri, the secretary-general of OPEC, walks out of a meeting on oil production surrounded by Qatari security officers in Doha, Qatar, on Sunday, April 17, 2016. Oil-producing countries are meeting in Qatar to discuss a possible freeze of production to counter low global prices, but Iran's last-minute decision to stay home could dilute the impact of any agreement. (AP Photo/Jon Gambrell)</p>

The hourslong meeting in Doha, the Qatari capital, resembled a failed OPEC meeting in December that saw crude oil prices tumble on the cartel's indecision. The fact that producers couldn't agree to even freezing production at near-record January figures likely means oil prices will drop again as markets open Monday.

Speaking to journalists after the summit, Mohammed bin Saleh al-Sada, Qatar's energy and industry minister, said the 18 countries gathered for the meeting believed "the fundamentals of the market are generally improving."

However, he largely dodged the questions about whether another special summit will be called before OPEC's next meeting in June and whether Iran had anything to do with the breakdown of the talks.

"We of course respect their position and ... we still don't know how the future will unroll but it was a sovereign decision by Iran," said al-Sada, who is serving as OPEC's president. "The freeze could be more effective definitely if major producers, be it from OPEC members like Iran and others, as well as non-OPEC members, are included in the freeze."

Sunday's gathering follows a surprise Doha meeting in February between Qatar, Russia, Saudi Arabia and Venezuela, in which they pledged to cap their crude output at January levels if other producers do the same.

They had hoped the cap would help global oil prices rebound from their dramatic fall since the summer of 2014, when prices were above $100 a barrel.

Prices dropped briefly to under $30 a barrel, a 12-year low, in January, but have climbed to the mid-$40s this week, boosted in part by market speculation about the Qatar meeting.

Western markets were closed Sunday and not immediately affected by the discussions, though the failure to reach a freeze likely will come into play Monday. Stock exchanges in Saudi Arabia and Dubai closed in negative territory Sunday, with the Saudi Tadawul down 1.48 percent.

Iran decided to stay home late Saturday after saying the day before it would send an emissary to the meeting. Speaking to Iranian state television, Oil Minister Bijan Namdar Zangeneh said it didn't make sense to send any representative from the Islamic Republic "as we are not part of the decision to freeze output."

"We can't cooperate with them to freeze our own output, and in other words impose sanctions on ourselves," Zangeneh said.

With many international sanctions lifted under its nuclear deal with world powers, Iran began exporting oil into the European market again and is eager to claw back market share. It produces 3.2 million barrels of oil a day now, with hopes of increasing to 4 million by April 2017.

Sunni-ruled Saudi Arabia had said it wouldn't back any freeze if Iran, its Shiite rival, doesn't agree to it, throwing the deal into question before the meeting. The kingdom seems determined to ride out the low prices that could squeeze Tehran. Saudi Oil Minister Ali al-Naimi declined to speak to journalists during the meeting.

That dispute underscores the level of discord inside OPEC as it faces arguably its biggest challenge since the oil glut of the 1980s. Even had officials reached a deal, Iran's production and oil from other sources, like the U.S., could keep prices down.