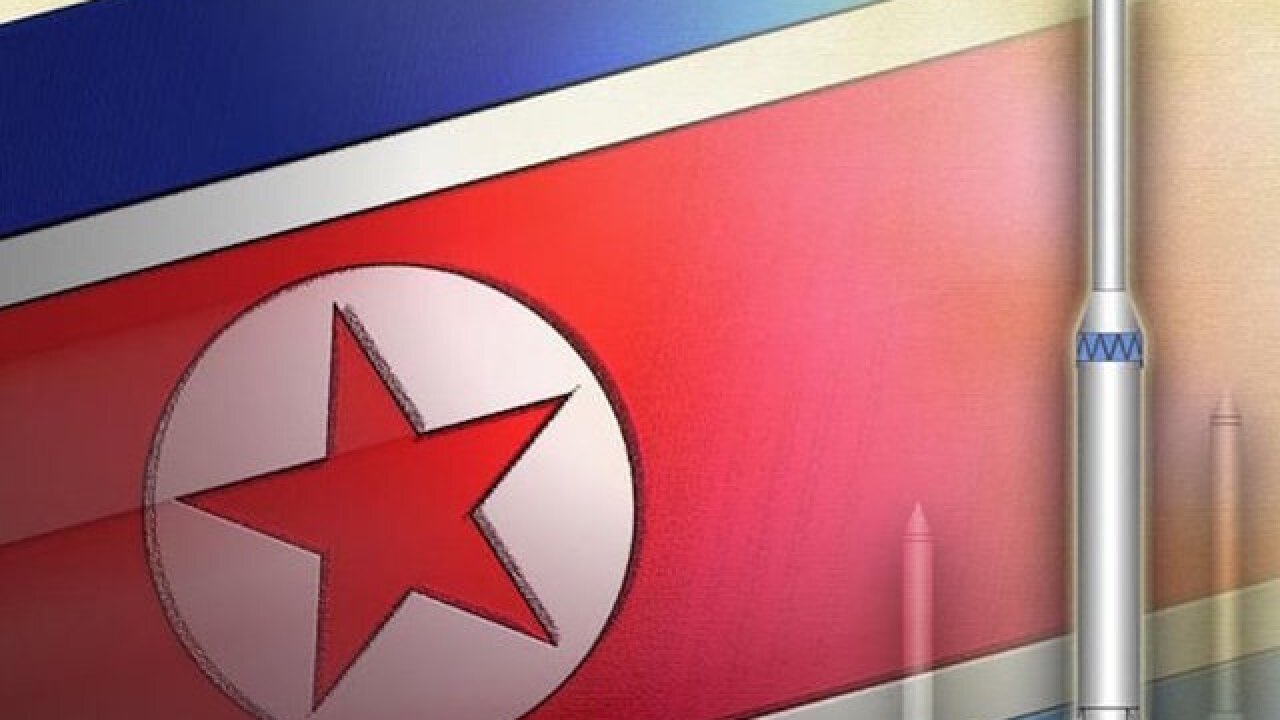 © 2017 Cable News Network, Inc.
CNN
<p>North Korea has fired an unidentified ballistic missile from North Pyong'an Province that flew into waters east of the Korean Peninsula, according to a press release from South Korea's Joint Chiefs of Staff.</p>

North Korea claims to have successfully tested a hydrogen bomb, the country's sixth-ever test of a nuclear weapon and first since US President Donald Trump took office.

The test was a "perfect success" and the final step in attaining a "state nuclear force," long-time news anchor Ri Chun Hee said in a televised announcement Sunday.

The news report claimed the weapon was designed to fit atop an intercontinental ballistic missile. The nuclear test follows two successful tests of the long-range missile in July and a shorter-range one in late August.

South Korea is finding, as I have told them, that their talk of appeasement with North Korea will not work, they only understand one thing!

In a high-level national security meeting, South Korea President Moon Jae-in called the move a "an absurd strategic mistake" that will lead to the international community further isolating Pyongyang.

NORSAR, an independent seismic monitor, estimated the blast created a yield of about 120 kilotons. The tremors caused by North Korea's Sunday test were at least 10 times more powerful than the fifth test, Japanese officials said. An official at the Korea Meteorological Administration estimated the blast was about 50 kilotons.

The test came just hours after North Korea released images of leader Kim Jong Un inspecting what it said was a hydrogen bomb ready to be put on top of an intercontinental ballistic missile, the type of weapon the country would need to use to deliver a nuclear warhead to far-away locations.

"We shouldn't be surprised by the fact they had the test, but usually they spread it out a bit," said Melissa Hanham, a senior research associate in the East Asia Nonproliferation Program at the James Martin Center for Nonproliferation Studies (CNS).

Hanham said it's impossible to say if the peanut-shaped object shown in the images released by North Korean state media was detonated.

"When you're evaluating these explosions, you have to do it with a grain of salt because you're trying to mold a mathematical equation to something that's happening in the real world. And the equations can to grip on things like depth or the geology of the area, and we don't know those kinds of facts," she said.

Sunday's test comes almost one year after Pyongyang's fifth nuclear test last September, which triggered a 5.3-magnitude seismological event. That took place on September 9, the country's Foundation Day holiday. North Korea claimed it set off a thermonuclear weapon during that test, but experts said the data showed it was more likely a boosted fission weapon.

Earlier Sunday, seismological data from the United States Geological Survey (USGS) showed that an explosion caused a 6.3-magnitude tremor in the country's northeast, not far from the country's Punggye-ri nuclear test site.

Lassina Zerbo, the executive secretary of the Comprehensive Nuclear-Test-Ban Treaty Organization, tweeted more than 34 stations picked up the seismic activity from the blast. Tremors could be felt as far as Vladivostok, Russia -- about 200 miles away -- one resident told CNN.

Japanese Foreign Minister Taro Kono was the first to confirm the existence of a test based on data provided by the Japan Meteorological Agency.

South Korea's Joint Chiefs of Staff said the military has raised its alert status after detecting a "man-made earthquake near Punggye-ri."

A second, smaller tremor was detected by the USGS and its Chinese counterpart. Both speculated it may have been caused by some sort of structural collapse. Zerbo of the Comprehensive Nuclear-Test-Ban Treaty Organization told CNN it was likely caused by the initial blast.

China, North Korea's only real ally and patron, said its neighbor "disregarded universal opposition of the international community" by conducting the test."

"We strongly urge North Korea side to face up to the firm will of the international community on the denuclearization of the peninsula, abide by relevant resolutions of the UN Security Council, stop taking wrong actions that exacerbate the situation and are not in its own interest, and return to the track of resolving the issue through dialogue," the Chinese Foreign Ministry said in a statement.

Mike Chinoy, a senior fellow at the US-China institute and former CNN Beijing bureau chief, said the timing of the nuclear test was a "deliberate poke in the eye from North Korea," as Beijing is now hosting an economic summit with the fellow BRICS countries -- Brazil, Russia, India, China and South Africa.

"The Chinese have been pressing North Korea very hard not to stage a nuclear test," he said. "It's a deliberate gesture of non-respect. And I think what it shows is that Kim Jong Un is extremely confident that he can provoke and push across the board without risking the kind of sweeping retaliation that would inflict enough pain upon him and his system that would force him to change his tactics."

China's Nuclear Safety Administration said it has begun emergency monitoring for radiation along its border with North Korea.

North Korea's weapons program has been progressing at a rapid pace under leader Kim Jong Un, with each nuclear and missile test helping Pyongyang improve its weapons technology,

This is the first nuclear test since Trump took office. Trump's administration is pursuing what it calls a strategy of "peaceful pressure" to get North Korea to bring its nuclear weapons program to the negotiating table.

But critics worry that the US administration's insistence on denuclearization and some of the President's harsh rhetoric have done more harm than good.

"The test is dramatic, but not necessarily a game-changer. Thermonuclear weapons are more destructive, but their use can be deterred with the same actions as smaller warheads," said Adam Mount, a North Korea expert and senior fellow at the Center for American Progress.

North Korea sees its nuclear weapons program as crucial to deterring any US-led attempts at invasion, making it unlikely that they will negotiate it away, analysts say.

"It's too late to think we could create enough pressure and pain that they will volunteer to eliminate their arsenal. The priority now is to maintain stability, to lower the risk of miscalculation and miscommunication so that a war doesn't break out that nobody wants," Mount said.

CNN's Will Ripley, who was in North Korea until Sunday, says the latest nuclear test doesn't rule out a diplomatic solution to this ongoing situation but shows that North Korea won't come to the table from a position of weakness.

"(The North Koreans) believe this nuclear deterrent is their key to stability and eventually to a seat at the diplomatic table. Just because North Korea has conducted a sixth nuclear test doesn't mean the world is a more dangerous place now than it was a few hours ago," Ripley said. "They say these type of weapons will prevent a war."

Tensions between North Korea and the international community flared again last week after Pyongyang flew a missile over Japan. The United States and its allies responded by sending fighter jets and bombers over the Korean Peninsula in a so-called "show of force" operation.

Analysts have said for months that another nuclear test was likely on the way, with satellite imagery revealing that a new tunnel had been dug earlier this year. Independent nuclear experts told CNN that another test would likely be a way to increase the yield, or destructive power, of a weapon.

"For months North Korea refrained from conducting a nuclear test and from launching missiles over Japan, even though that meant testing on highly lofted trajectories and launching satellites to the south rather than east, which is more efficient. It now seems to have decided to end that restraint," said David Wright, the co-director of the Union of Concerned Scientists Global Security Program.