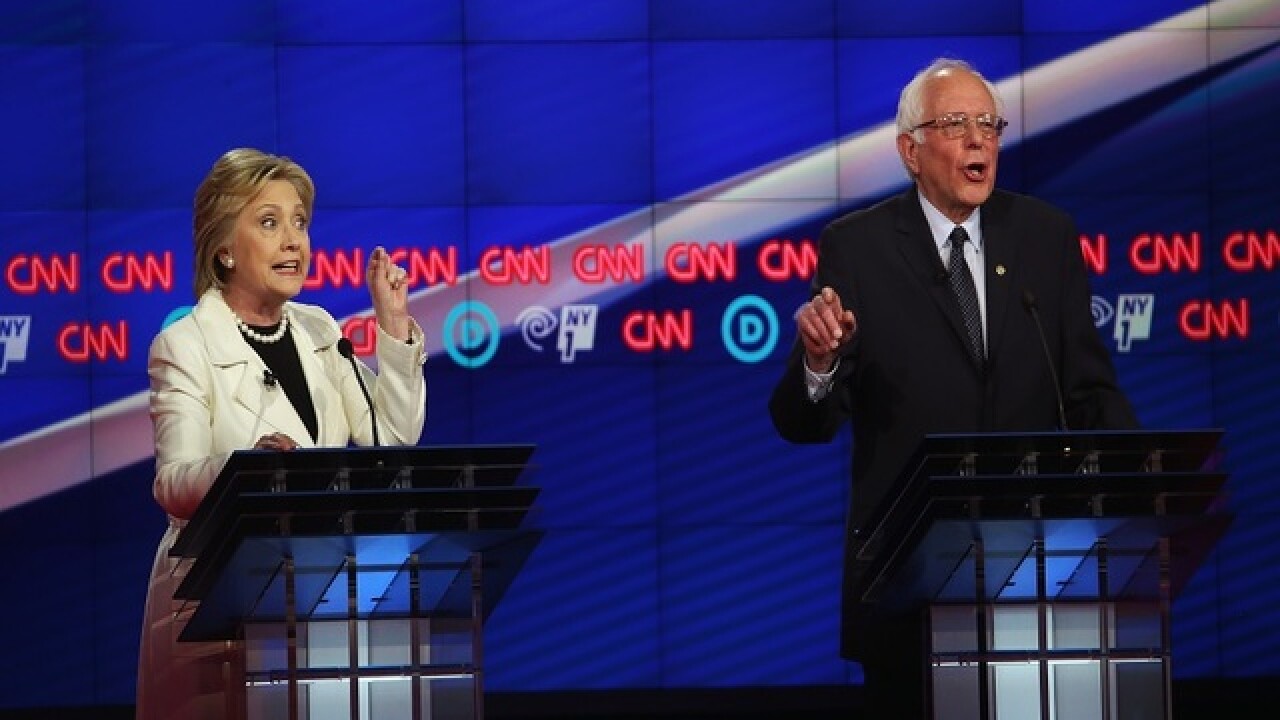 NEW YORK (AP) — Hillary Clinton and Bernie Sanders let loose with a series of combative accusations on Wall Street, the minimum wage and guns in a rough-and-tumble debate Thursday at the Brooklyn Navy Yard.
The contentious, fast-paced back-and-forth between the two Democratic presidential candidates was proof of how much is at stake entering Tuesday's New York primary.
For Sanders, a loss in New York would narrow his already difficult path to the nomination. For Clinton, anything less than victory in the state she represented in the Senate would be an embarrassment and make nervous Democrats even more anxious.
Here are the top takeaways from Thursday's debate:
__
TOUGH TONE
Clinton and Sanders did little to hide their annoyance with each other.
Sanders was often caustic as he questioned Clinton's credibility on super PACs, the Iraq War and Wall Street. "My goodness! They must have been really crushed by this," Sanders said in a mocking manner about Clinton's response to financial executives after the 2008 financial crisis.
Clinton suggested Sanders didn't have the judgment to be both president and commander in chief and implied he had cut a deal with the National Rifle Association to get elected to Congress in 1990. "He kept his word to the NRA," she said.
Both talked over each other at times, their voices rising. At one point, CNN moderator Wolf Blitzer said if they continued "screaming at each other," no one would be able to hear either of them.
__
WALL STREET
Sanders hoped to use the debate just miles from Wall Street to portray his opponent as insufficiently tough on corporate greed. When Sanders played the Wall Street card, Clinton tried to turn it around as an attack on President Barack Obama — among the party's most popular figures.
Clinton said Obama and the groups that supported his candidacy received "tens of millions of dollars" from the financial industry, but he still steered the Dodd-Frank financial overhaul through Congress. "This is a phony attack," she said.
Sanders pointed to the Wall Street-backed donations filling the coffers of a pro-Clinton super PAC. And he dismissed Clinton's contention that she had told Wall Street firms to reform their ways before the financial crisis in 2008. "They must have been very, very upset by what you did," he said sarcastically.
__
MINIMUM WAGE
Sanders tried to paint Clinton as a johnny-come-lately on hourly wages, expressing surprise when he thought Clinton said she was supportive of a $15 an hour federal minimum wage.
Clinton has supported the "Fight for $15" push by labor unions, but backed a more incremental approach in a Senate bill that calls for an increase in the federal minimum wage to $12 an hour. Cities and states, Clinton argues, should be free to go further.
But Sanders said he was surprised to hear that Clinton might support the $15 threshold, telling the audience, "I think the secretary has confused a lot of people."
Clinton said she was being consistent and in the eight previous encounters, "I have said the exact same thing."
__
SANDERS' TAKE ON MIDDLE EAST PEACE
In standing by his past criticism of Israel, Sanders delivered some straight talk that might cost him some voters in New York — but highlighted Clinton's rigid orthodoxy on the issue of Middle East peace.
Sanders wasn't fazed when asked whether he believes Israel has acted disproportionately in responding to attacks from Hamas. He said the devastation to schools, hospitals and infrastructure in Gaza has not matched the threat.
"That does not make me anti-Israel," Sanders said.
Clinton stuck to the pro-Israel hard line. In war, leaders must take "appropriate precautions," she said — but Israelis "did not seek this kind of attack, they do not invite rockets raining down on their towns and villages." Sanders, she said, was again describing a problem without proposing a solution.
Sanders came back by accusing Clinton of evading the question.
"We are going to have to say that Netanyahu is not right all the time," he said, referring to Israeli Prime Minister Benjamin Netanyahu. "Long-term, there will never be peace in that region unless the United States plays a role — an even-handed role."
___
TRANSCRIPTS OR TAX RETURNS?
Clinton was pressed again to release the transcripts of her paid private speeches to Wall Street executives after she departed the State Department in 2013.
The ex-secretary of state again demurred, saying Republican candidates should also be forced to comply. But this time she pointed out that Sanders hadn't released his recent tax returns, which she said was a basic standard for any presidential hopeful.
Sanders announced that he would release his 2014 tax return on Friday and he would release others in due time. The senator said his wife, Jane Sanders, handled the family's taxes but offered this excuse: "We've been a little bit busy lately."
Associated Press 2016