NASA wants to send a new craft to Mars — a helicopter 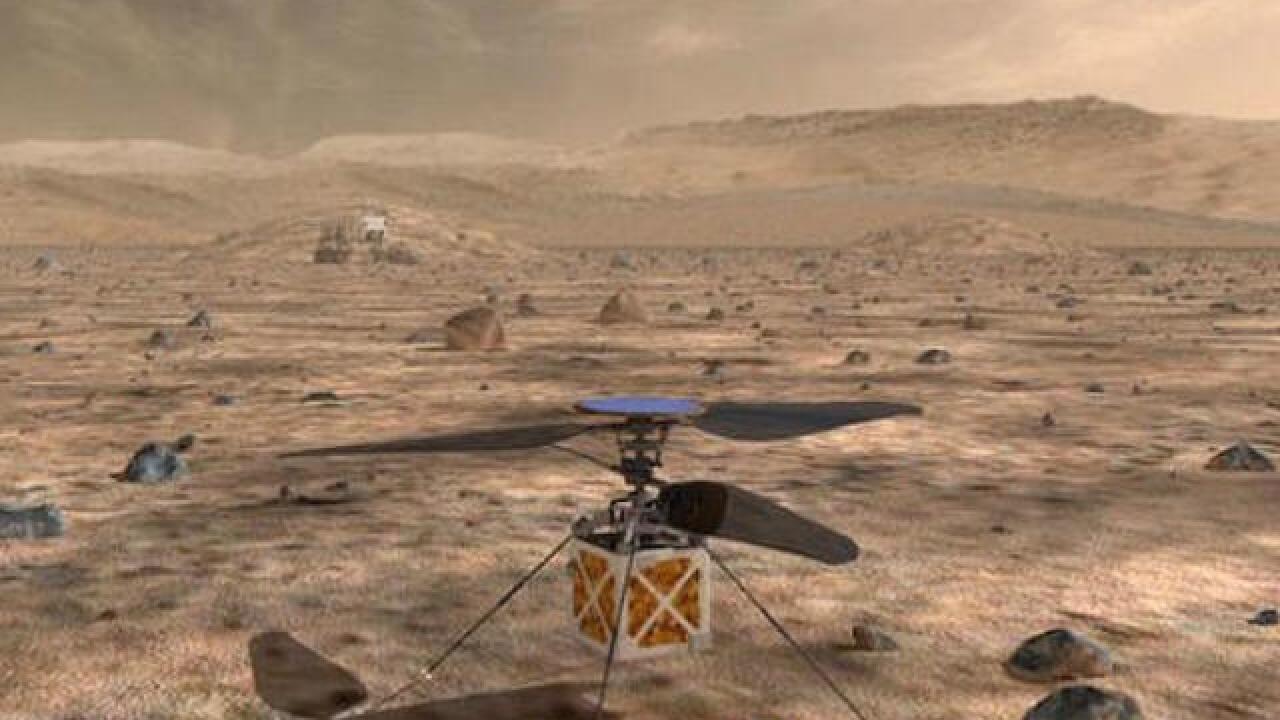 NASA has long been able to check out Mars on the ground with rovers and landers and from far above with orbital spacecraft. Now, it wants to prove that it can sustainably fly around the planet's thin atmosphere at low altitude -- with a tiny helicopter.

NASA announced Friday it will send the Mars Helicopter to the Red Planet with the previously announced Mars 2020 rover, set to launch in two years from Florida.

The hope is that aircraft like this one -- flying mechanical scouts -- will eventually give scientists another vantage point from which to observe Mars.

The helicopter will be mankind's first attempt to fly a heavier-than-air craft -- think helicopter or airplane -- in an atmosphere other than Earth's, the space agency said.

Its mission will be to take five test flights after it lands with the rover in February 2021.

"After the Wright Brothers proved 117 years ago that powered, sustained, and controlled flight was possible here on Earth, another group of American pioneers may prove the same can be done on another world," said Thomas Zurbuchen, associate administrator for NASA's science mission directorate in Washington.

The small copter -- its main body will be about the size of a softball -- will be attached to the rover's belly pan. After the rover lands, it will place the helicopter on the ground and move away.

After the helicopter's solar cells charge its lithium-ion batteries, NASA controllers on Earth will prepare the craft for its tricky test flights.

To rise into the Mars' thin atmosphere, the helicopter's two counter-rotating blades will turn at nearly 3,000 revolutions per minute, or more than 10 times as fast as a helicopter's blades on Earth, NASA says.

"The altitude record for a helicopter flying here on Earth is about 40,000 feet. The atmosphere of Mars is only 1% that of Earth, so when our helicopter is on the Martian surface, it's already at the Earth equivalent of 100,000 feet up," Mimi Aung, the Mars Helicopter project manager at NASA's Jet Propulsion Laboratory, said in a news release.

"To make it fly at that low atmospheric density, we had to scrutinize everything, make it as light as possible while being as strong and as powerful as it can possibly be," she said.

Hoping to see 'what lies beyond the next hill'

On the first test flight, NASA intends to have the helicopter climb 10 feet into the air and hover for 30 seconds.

NASA says it hopes to fly the aircraft incrementally father and longer in the four subsequent test flights, with distances up to a few hundred meters and durations as long as 90 seconds.

Because Earth will be several light minutes away, "there is no way to joystick this mission in real time," Aung said.

"Instead, we have an autonomous capability that will be able to receive and interpret commands from the ground, and then fly the mission on its own," she said.

If the tests work, NASA will be closer to exploring the Red Planet in a different way.

"The ability to see clearly what lies beyond the next hill is crucial for future explorers," Zurbuchen said. "We already have great views of Mars from the surface as well as from orbit. With the added dimension of a bird's-eye view from a 'marscopter,' we can only imagine what future missions will achieve."

The Mars 2020 rover will have a mission of its own -- including seeking signs of life for two years and using instruments to help NASA learn more about how to safely land humans there. It also will have microphones allowing NASA to hear sounds on the surface for the first time.

Two other rovers, Curiosity and Opportunity, continue exploring Mars, sending back photos of the surface and searching for signs of past life.

Opportunity landed on Mars in 2004 and has outlived its original plan for a 90-day mission. Curiosity landed in August 2012. Both rovers have found evidence that conditions were once fit for ancient life, as well as signs of active, ancient organic chemistry.

Earlier this month, NASA launched its InSight probe, expected to land near Mars' equator in November. It, among other things, is scheduled to burrow 10 to 16 feet into the planet's crust, giving scientists new insights into Mars' interior.