Mitsubishi: Mileage issue may be on all models 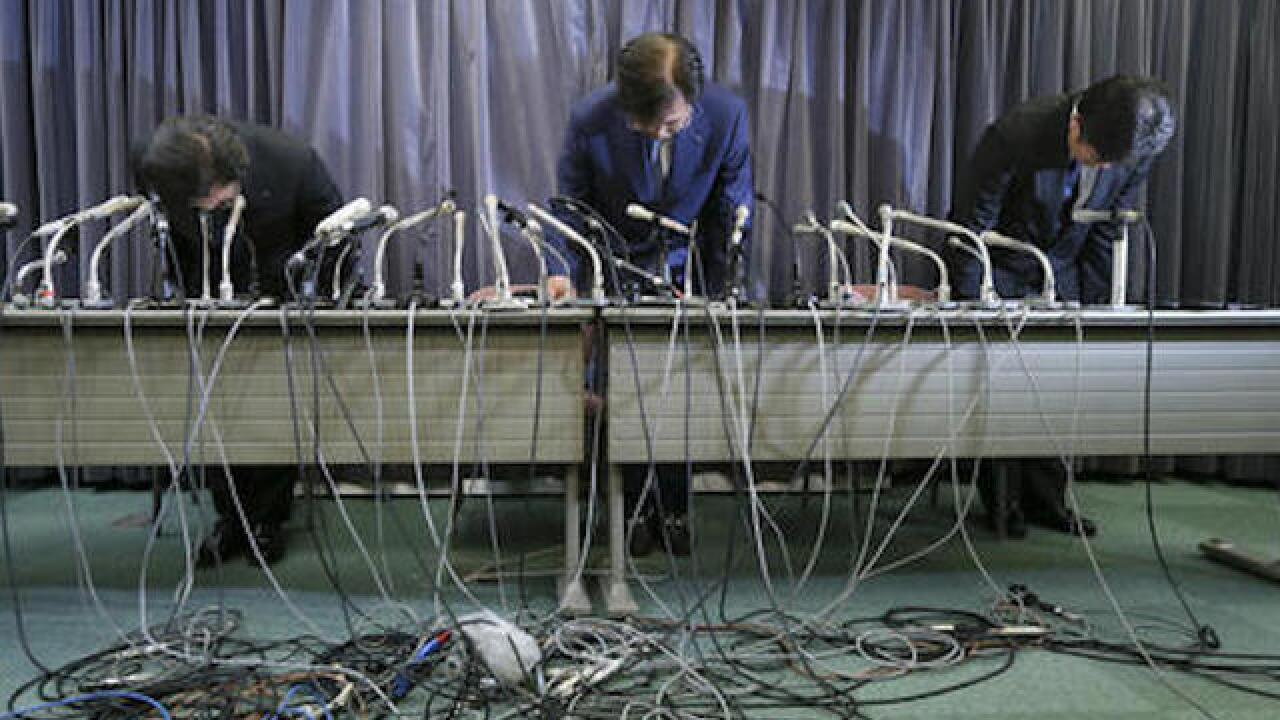 Copyright Associated Press
Eugene Hoshiko
<p>Mitsubishi Motors Corp. Chairman and CEO Osamu Masuko, center, and President Tetsuro Aikawa, left, bow during their press conference in Tokyo, Wednesday, May 11, 2016. Mitsubishi Motors, the Japanese automaker under investigation for lying about fuel economy data for some models, said Wednesday such tampering is suspected in all of its vehicles sold in Japan. (AP Photo/Eugene Hoshiko)</p>

TOKYO (AP) — Mitsubishi Motors Corp., the Japanese automaker under investigation for lying about fuel economy data for some models, said Wednesday such tampering is suspected in all of its vehicles sold in Japan.

The company has said it carried out false tests and gave inflated mileage on minicars known as "kei," whose production began in 2013, called eK wagon and eK Space light passenger cars under its own brand and Dayz and Dayz Roox that it produced for Nissan Motor Co.

The company said the extent of such fraudulence was wide, possibly affecting all current and discontinued models sold in Japan. It abided by mileage-test requirements for vehicles sold abroad, it said.

The latest scandal surfaced last month after Nissan pointed out discrepancies with its own mileage tests. Mitsubishi also was embroiled in a massive scandal 15 years ago involving a systematic cover-up of auto defects.

U.S. environmental regulators have ordered additional testing to verify gas mileage on the models it sells in the country. Mitsubishi sells five models in the U.S., including three cars and two SUVs.

Although managers were fully aware of the difficulties involved in attaining good mileage, it did not bother to communicate with those on the ground doing the cheating to investigate, the company said in a statement to the government.

Employees simply made up some of the data, raising the mileage fraudulently five times during the development of the minicars, it said.

Tokyo-based Mitsubishi is still working on how to compensate the customers.

Mileage fraud is a violation of Japan's fuel efficiency law for autos because buyers are eligible for tax breaks if a vehicle model delivers good mileage. Possible penalties are still unclear.

The company said it will report later on the findings of a panel of three lawyers to further investigate the scandal from an outsider's point of view.

Big-name brands such as Mitsubishi, an industrial conglomerate that includes a trading company, real-estate, jet manufacturing and financial group, are revered in Japan, a nation that values tradition.

But these days, even Japanese media have begun speculating about the future of Mitsubishi Motors, which apparently failed to learn from its serious auto-defects scandal in the early 2000s.

The cover-ups then were over failing brakes, faulty clutches and fuel tanks prone to falling off dating back to the 1970s. That resulted in more than a million vehicles being recalled retroactively.