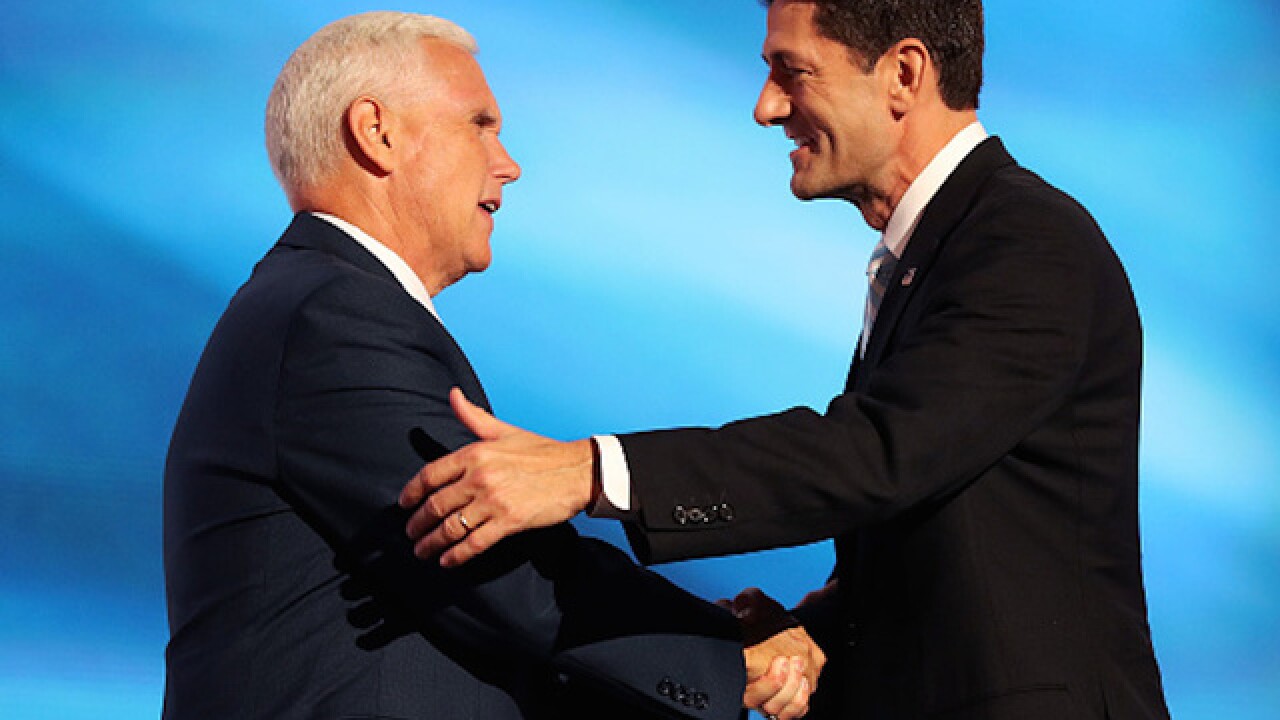 John Moore
<p>CLEVELAND, OH - JULY 20: Speaker of the House Paul Ryan shakes the hand of Republican Vice Presidential candidate Mike Pence as he walks on stage to deliver a speech on the third day of the Republican National Convention on July 20, 2016 at the Quicken Loans Arena in Cleveland, Ohio. Republican presidential candidate Donald Trump received the number of votes needed to secure the party's nomination. An estimated 50,000 people are expected in Cleveland, including hundreds of protesters and members of the media. (Photo by John Moore/Getty Images)</p>

WASHINGTON (AP) — Republican vice presidential nominee Mike Pence declined to say whether Paul Ryan should be re-elected as speaker of the House, withholding support from a close friend and ally in the heated final days of the presidential campaign.

Pence's comments in an interview published Thursday in the National Review were startling because Pence and Ryan served together in the House and have been seen as ideological soul mates. Ryan heaped praise on the Indiana governor when Donald Trump selected him as his running mate, saying, "I can think of no better choice."

And in August, when Trump briefly withheld his endorsement from Ryan in the speaker's Wisconsin House primary, Pence was quick to publicly declare his own backing of Ryan.

But as the chaotic 2016 election draws to a close, Ryan faces rumblings of a leadership challenge from House conservatives frustrated with his declaration last month that he would no longer defend or campaign for Trump. That followed release of the "Access Hollywood" tape with Trump boasting of groping women and saying he could get away with it because he's a star.

And now Pence appears unwilling to offer a full-throated endorsement of Ryan.

The National Review story said that Pence declined three times to answer whether Ryan should be re-elected as speaker presuming Republicans maintain control of the House. Pence said "my respect for Paul Ryan is boundless" but also said, "I'm not a member of the House Republican conference anymore. I wouldn't presume upon what the members of the conference choose."

A Pence spokesman, Marc Short, insisted in a phone interview with The Associated Press that Pence does actually support Ryan being re-elected speaker, attributing other interpretations to people trying to "sow divisions" as the Republican Party comes together in the waning days of the campaign.

"He's 100 percent supportive of him being speaker of the House," Short said.

And in an interview with The Associated Press, Republican National Committee Chairman Reince Priebus called the focus on Pence's comment "a distraction" and praised Ryan, saying he "absolutely" should continue as speaker.

"If he wants to. I don't know what he wants to do," Priebus said. "He didn't want the job to begin with, I can promise you that. But if he wants to stay, then by all means I think he should."

If Democrat Hillary Clinton wins, both Ryan and Pence have been mentioned as potential presidential candidates in 2020, and Pence's unwillingness to endorse Ryan as speaker could be the early maneuverings of two likely White House rivals.

Ryan, who himself served as the GOP vice presidential nominee four years ago, has been House speaker since getting drafted into the job just over a year ago. That happened when the previous speaker, John Boehner of Ohio, stepped down under pressure from the conservative Freedom Caucus.

Now Ryan is facing his own problems with the group. A couple of lawmakers have suggested publicly that Ryan's refusal to strongly back Trump makes it hard for them to support him. That issue will come to a head the week after the election when House Republicans will meet to select their nominee for speaker.

Ryan did publicly reaffirm his support for Trump this week and said he had voted for him in early voting in Wisconsin.