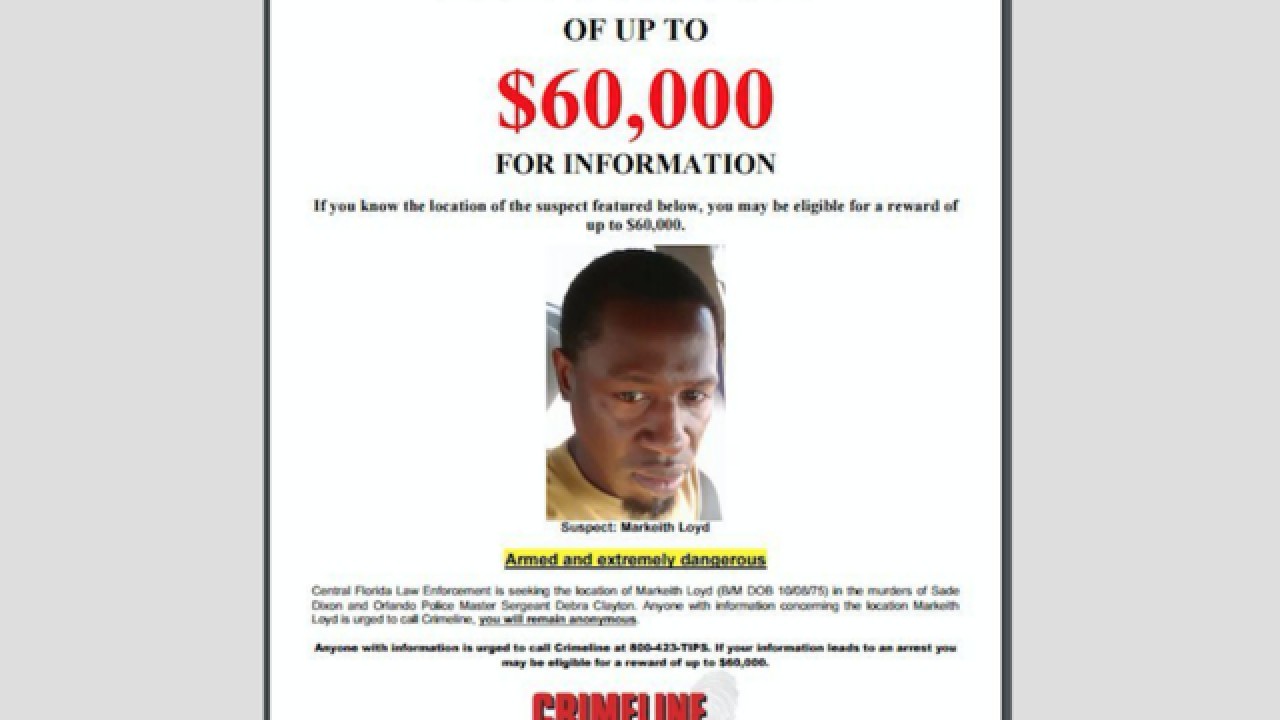 (CNN) -- A massive manhunt continued Tuesday after an Orlando police officer was shot and killed, and another officer died in a traffic accident as he helped search for the gunman.

The suspect, identified at Markeith Loyd, is considered "armed and extremely dangerous." Hundreds of law enforcement officers have been hunting for him since Orlando police Master Sgt. Debra Clayton, 42, was shot outside a Walmart on Monday.

On Monday morning, Clayton had received word that Loyd, who is a suspect in the killing of his pregnant girlfriend, was near a local Walmart. She chased after him and was fatally shot.

The suspect fled the scene, triggering an intense manhunt that included door-to-door searches in apartment complexes. Dozens of schools were placed on lockdown until Monday afternoon.

Hours later, another officer died while taking part in the manhunt when his motorcycle collided with another vehicle. He was identified as Orange County Sheriff's Deputy First Class Norman Lewis.

With two officers dead and a suspect at large, police have vowed to find Loyd. They are offering up to $60,000 in reward for information leading to his arrest.

"I'm confident we will find him," said Orlando Police Chief John Mina. "It doesn't matter where he is. We will track him down to the ends of the Earth to find him."

After the shooting, Loyd fled in a vehicle and fired shots at another officer, police said. That officer was not seriously injured.

The suspect then abandoned the first vehicle and carjacked another one. He ditched that second vehicle shortly after and ran into an apartment complex, Mina said.

Residents were urged to stay inside. Mina said officers searched "dozens of apartments and residences."

"I believe there have been people out there helping him all along," he said. "If we find out about those people we will criminally charge them."

He said Loyd would be charged with first-degree murder of a law enforcement officer and attempted murder of the officer he fired at.

Many officers in the area joined the effort to find Loyd. Among them was Deputy Norman Lewis with the Orange County Sheriff's, who died in a crash as he was on his motorcycle.

"A motorist turned in front of him," Orange County Sheriff Jerry Demings said. "Based on eyewitness testimony, he had a green light, he was not traveling at any (high) rate of speed."

Lewis had worked 11 years with the sheriff's department.

"To lose two law enforcement officers on this Law Enforcement Officer Appreciation Day is indeed a tragedy," the sheriff said.

The department is mourning Lewis, but there is also a suspect on the loose.

"While we're processing our own emotional feelings, we still have a job to do," Demings said.

'He shot her down'

The shooting happened early Monday morning after Clayton had received word that Loyd was in the area near a local Walmart. She radioed at 7:17 a.m. to say she was trying to contact a murder suspect.

"As soon as she said stop, he basically opened fire on her," Mina said.

A witness outside the Walmart described a similar scene.

"I was walking down the sidewalk, right past the officer, and I heard her tell him to stop, or whatever, and he shot her," witness James Herman told CNN affiliate WFTV. "He shot her down."

The gunman continued shooting behind him as he was running from the scene, Herman said. He also said the man wore a security shirt, but Mina said the suspect was not a security guard.

Mina said his department is grieving the death of Clayton, a 17-year veteran.

"I've known Debra for 17 years. She was extremely committed to our youth and the community. She did so many different projects in the community.

"She organized several marches against violence by herself," the police chief said.

Clayton was married and the mother of a college-age son.