Kavanaugh: 'No one is above the law' 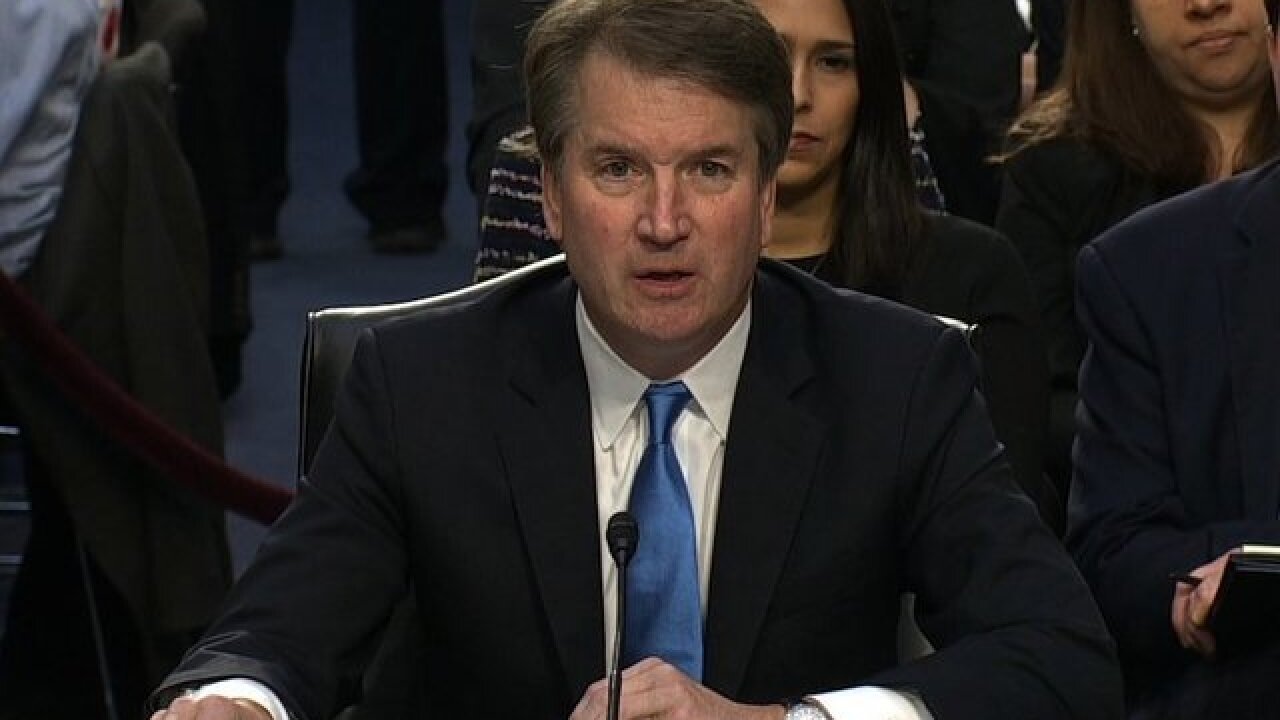 © 2018 Cable News Network, Inc.
POOL
<p>Supreme Court nominee Brett Kavanaugh declared Wednesday that "no one is above the law in our Constitution," including the executive branch, as the second day of his confirmation hearing began.</p>

Supreme Court nominee Brett Kavanaugh declared Wednesday that "no one is above the law in our Constitution," including the executive branch, as the second day of his confirmation hearing began. But he declined to say whether a president should be forced to respond to a subpoena.

Kavanaugh, President Donald Trump's nominee, could at some point be called upon to rule on a challenge related to special counsel Robert Mueller's investigation of Russian interference in the 2016 election. Senate Democrats have suggested that Kavanaugh could be biased in favor of the President.

When asked whether a sitting President should be forced to respond to a subpoena, Kavanaugh said, "My understanding is that you're asking me to give my view on a potential hypothetical, and that is something that each of the eight justices currently sitting on the Supreme Court, when they were sitting in my seat, declined to decide potential hypothetical cases."

The session Wednesday morning has been repeatedly interrupted by protesters in a repeat of Tuesday's hearing. One shouted: "Sham president, sham justice!"

The first Democrat to question Kavanaugh was California Sen. Dianne Feinstein who cross examined him about his views on abortion and gun control.

Kavanaugh said that he viewed the 1973 Roe v Wade decision upholding a woman's right to an abortion as settled precedent of the Supreme Court under the doctrine of stare decisis.

Roe v. Wade is "entitled to respect" he said, adding that he understands the passion around the decision.

"I don't live in a bubble. I understand. I live in the real world. I understand the importance of the issue," he said.

But Feinstein, raising doubts that the nominee's position would hold if he came to rule on abortion from the Supreme Court bench said: "When the subject comes up, the person says we will follow stare decisis, and then they get confirmed and they don't," she said.

Feinstein also chose to drill down on gun control and school shootings, asking him to explain his dissent in a 2011 DC Circuit case upholding the District of Columbia's ban on the possession of most semi-automatic rifles.

Kavanaugh argued that his reasoning was based on the Supreme Court's majority decision in the Heller case, that held that semi-automatic rifles were constitutionally protected.

While decrying gun violence and sympathizing with Feinstein's horror over school shootings, Kavanaugh said, "I understand the issue, but as a judge, my job was to follow the Second Amendment opinion of the Supreme Court whether I agree with it or disagree with it."

During the hearing, Democrats also plan to grill Kavanaugh on the Affordable Care Act and executive power. Some will say Kavanaugh misled them 12 years ago in his testimony concerning his involvement on the legal war on terror when he was a nominee for the US Court of Appeals for the District of Columbia Circuit.

Republicans, meanwhile, remain confident. Kavanaugh has not only testified twice before, he worked on judicial nominations while serving in the George W. Bush White House. He understands the process better than most. He's been participating in "murder boards" -- practice sessions -- with clerks and Justice Department lawyers taking on the roles of senators, according to a participant.