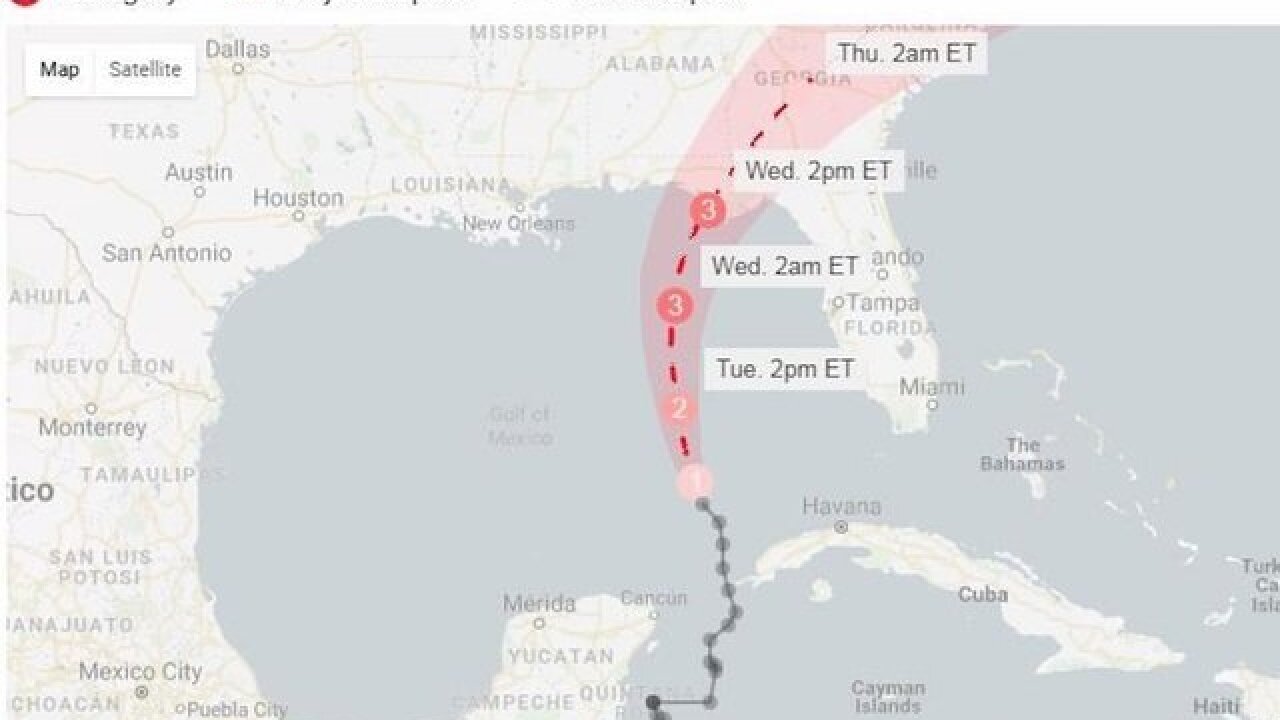 Hurricane Michael intensified as it aimed for the Florida Panhandle, where it could make landfall as the strongest storm in terms of wind speed in the country this year.

Michael churned in the Gulf of Mexico on Tuesday as a Category 3 storm, poised to grow stronger and slam Florida's Panhandle.

If the storm's core comes ashore as a Category 2 or higher, it would be the strongest storm in terms of wind speed to make landfall in the country this year.

Michael was expected to intensify overnight and be near Category 4 strength when it makes landfall Wednesday afternoon. It is threatening dangerous surges to low-lying areas ill-equipped to handle them.

Florida Gov. Rick Scott called Michael a "monstrous storm" that could bring "total devastation," and urged people to get out of the way.

"Hurricane Michael is forecast to be the most destructive storm to hit the Florida Panhandle in decades," Scott said. "You cannot hide from storm surge, so get out if an evacuation is ordered."

The storm had sustained maximum winds of 120 mph Tuesday night, with gusts to 150 mph. Category 3 storms have sustained winds of 111 mph to 129 mph, according to the hurricane center's scale. A storm goes to Category 4 with sustained winds stronger than 130 mph.

Winds of tropical storm force will be felt in the area starting early Wednesday, and mandatory or voluntary evacuation orders already have been issued in at least 22 counties on the Florida Gulf Coast head of the storm.

About 3.7 million people were under hurricane warnings in the Panhandle and Big Bend regions, as well as parts of southeastern Alabama and southern Georgia. Tropical storm warnings cover 8.5 million people in four states.

The storm's center and where it makes landfall with its destructive winds represent just one of several concerns. Among them:

• Life-threatening storm surges could slam the Florida Gulf Coast, with the deadliest of possibly 9 to 13 feet expected between Mexico Beach and Keaton Beach. "That means the water will come miles in shore and could easily be over the roofs of houses," Scott said.

• Heavy rain and flooding are expected not just for Florida but also for other parts of the Southeast. Up to 12 inches of rain could fall in Florida's Panhandle and Big Bend, southeastern Alabama and southern Georgia, while parts of the Carolinas -- recently deluged by Hurricane Florence -- and southern Virginia eventually could see up to 6 inches, the hurricane center said.

• Tornadoes could spawn in the Southeast Wednesday into Thursday, forecasters said.

• Damaging winds are expected to rake not just Florida but also southeastern Alabama and southern Georgia.

'We need the residents to be leaving today'

A hurricane warning was in place from the Alabama-Florida border to the Suwannee River in Florida.

Meanwhile, tropical storm warnings extended from Florida's Chassahowitzka River to the Mississippi-Alabama border. Tropical storm watches were in effect in some coastal areas of Mississippi, Florida, Georgia and South Carolina.

Storm surge warnings were also in place along the Florida and Alabama coasts.

"This is a life-threatening situation. Persons located within these areas should take all necessary actions to protect life and property from rising water and the potential for other dangerous conditions," the Hurricane Center said.

US Rep. Neal Dunn, whose district includes Panama City, urged people under evacuation orders to get out before tropical-storm-force winds arrived. He focused on islands off the coast whose bridges may close as the storm approaches.

"You haven't got anywhere to go (if the bridges close)," he said Tuesday morning. "And then you're riding it out in your car instead of something else. So, we need the residents to be leaving today because by this evening, those bridges are going to be in peril of being closed."

Tolls were being suspended in the state's northwest region to ease the evacuation process, and the Florida Highway Patrol is sending nearly 350 state troopers to the Panhandle and Big Bend areas, Scott said.

Her declaration activates the state's emergency operations plan, according to Ivey's office.

Boarded up businesses, a flooded deck, an empty harbor

In Florida, almost three dozen shelters opened or were prepared to open as the storm neared.

"Y'all, I just don't know what to say anymore. We may need to change the name to Below Sea Level. Closed until further notice," co-owner Dana Barrett wrote on the restaurant's page.

In St. Petersburg, water seeped into the street. "Ahead of #HurricaneMichael, #rain has started and many streets are already #flooded in the #Tampa Bay area of #Florida. Please be safe everyone!" Ali Sages wrote on Twitter.

In Panama City Beach, many businesses were closed and homes boarded up.

Cars were in long lines at one of the town's gas stations Tuesday.

In Destin, a harbor was empty and quiet in the peace before the storm.