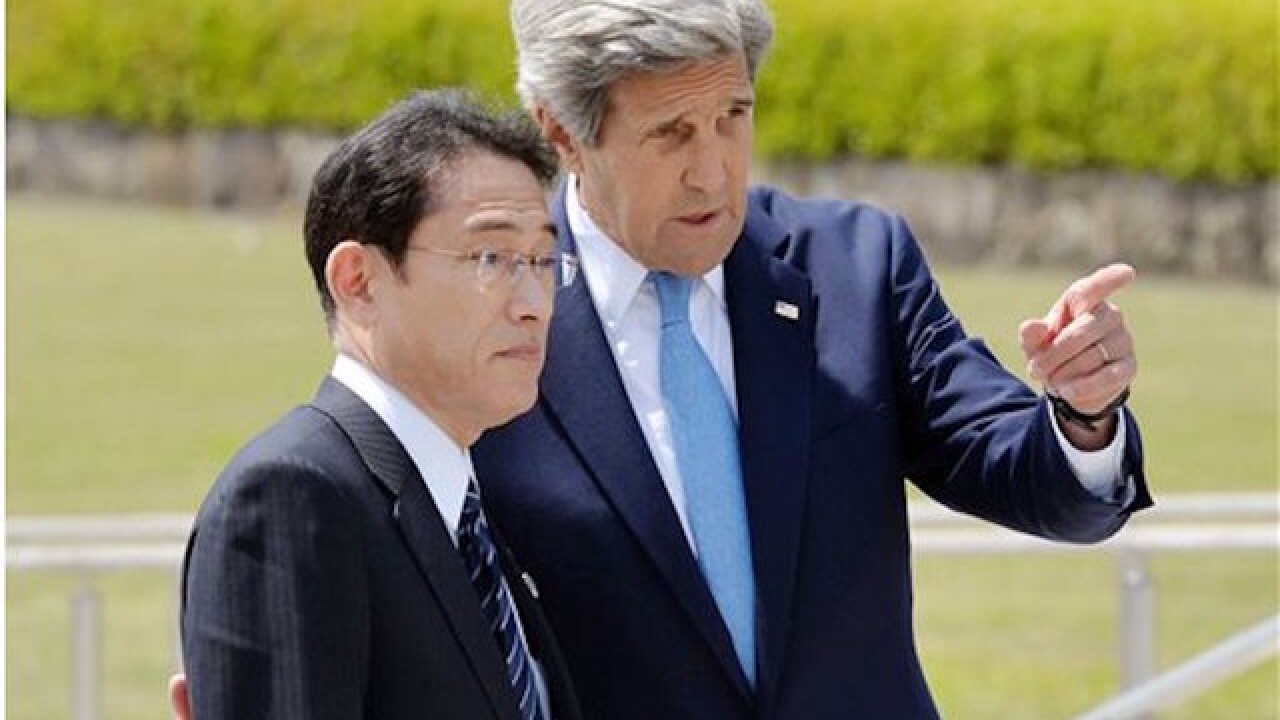 HIROSHIMA, Japan (AP) — Foreign ministers from the Group of Seven industrialized countries, meeting Monday in the atomic-bombed Japanese city of Hiroshima, called for a renewed push for flagging nuclear disarmament efforts as they wrestled with some of the intractable global problems facing their nations.

"Today, the world is now facing challenges to change such common values and principles unilaterally, such as terrorism and violent extremism," he said.

On terrorism, the top diplomats from the U.S., Japan, Britain, Canada, France, Germany and Italy pledged to complete a G-7 action plan that the leaders of their nations can adopt at their summit in Japan's Ise-Shima region in late May.

U.S. Secretary of State John Kerry said it's essential to reduce the number of terrorists who may try to return home from Syria and other areas. He also said it's key to stem the flow of refugees around the world.

"The refugee crisis demands a global response, and we all agreed on that here," he said.

A separate statement took aim at China's land reclamation in the South China Sea, where it is enmeshed in a series of overlapping territorial disputes with Southeast Asian nations.

"We express our strong opposition to any intimidating, coercive or provocative unilateral actions that could alter the status quo and increase tensions," the statement said, without mentioning China by name.

It also expressed concern about the situation in the East China Sea, where Japan and China both claim some uninhabited islands.

Japan gave the issue of nuclear nonproliferation added significance by making Hiroshima the venue for the two-day foreign ministers meeting.

Kerry — the highest-ranking American official to visit Hiroshima since World War II — and the foreign ministers jointly laid flowers for the victims of the U.S. atomic bombing in 1945.

They issued two statements on nonproliferation, including a "Hiroshima Declaration" that calls on other political leaders to visit Hiroshima.

"In this historic meeting, we reaffirm our commitment to ... creating the conditions for a world without nuclear weapons," the declaration said.

The task is made more complex, it said, by the deteriorating security environment in countries such as Syria and Ukraine, as well as by North Korea's "repeated provocations."

The Hiroshima declaration aims to revitalize and restart the effort toward a nuclear-free world, which seems to have shrunk, said Kishida, the Japanese foreign minister.