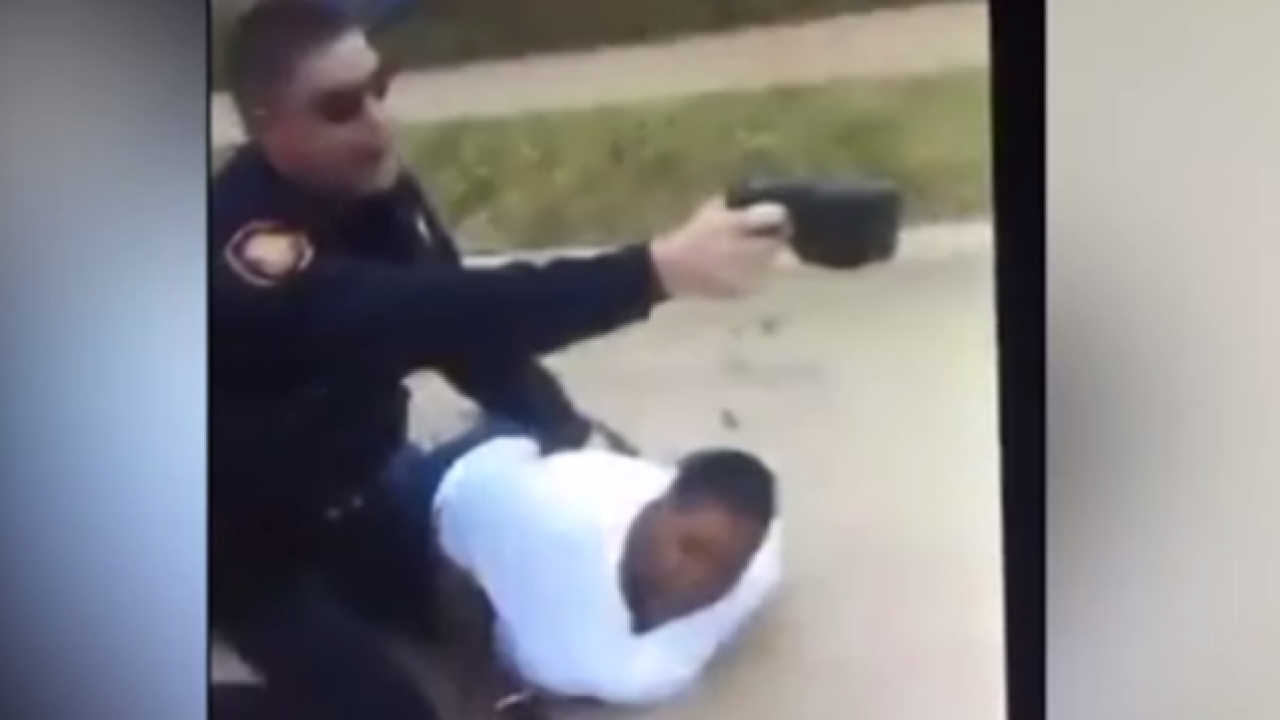 (CNN) -- A Fort Worth officer seen in a Facebook video arresting a woman who called police after a neighbor allegedly assaulted her young son has been suspended without pay for 10 days, authorities said Monday.

Officer William A. Martin's suspension came after an internal affairs investigation into the December 21 incident, which also resulted in the woman's two teenage daughters being taken into custody.

The cell phone video, which was posted to Facebook that evening, sparked outrage and allegations of racism. Martin is white and the woman, Jacqueline Craig, and her daughters are black.

Fort Worth Police Chief Joel Fitzgerald acknowledged some officers make mistakes and deserved to be fired, but he doesn't believe that's the case for Martin.

"Officer Martin was contrite. He's ready to get back to work. He is very sorry for what has transpired," Fitzgerald said.

Fitzgerald said the investigation showed "There were violations... neglect of duty would be one violation, discourtesy, we felt like there was some inappropriate contact that he had with two of the females," according to CNN affiliate KTVT.

Martin had previously been placed on restricted duty on Dec. 22 after the video surfaced. His name was not publicly released before.

The video, shot in a residential neighborhood, begins with Martin, who is in uniform, talking to a man standing on the sidewalk.

Martin then approaches a woman, identified as Craig, who tells the officer her young son complained that a man, the neighbor, had grabbed and choked the youngster. The man said the boy had littered, Craig said.

"Why don't you teach your son not to litter?" the video shows Martin asking Craig.

"He can't prove to me that my son littered," Craig replies. "But it doesn't matter if he did or didn't, it doesn't give him the right to put his hands on him."

"Why not?" the officer replies.

The video then shows the argument escalating. Martin wrestles Craig and her younger daughter to the pavement, handcuffs them and puts them in a patrol car. He also pulls out a stun gun, though it's unclear whether Martin uses it.

The clip ends with an apparent scuffle between Martin and the shooter of the video after he moves in to arrest her as well.

Craig's older daughter, Brea Hymond, shot the video, according to Jasmine Crockett, a lawyer for the family. It was uploaded to social media by a relative. Crockett acknowledged the family had a longer video of the incident but said they wouldn't release it at this time.

The man Craig accused of assaulting her son was not arrested, though police said they have taken a report and were investigating.

Craig, 46, and Hymond, 19, were charged with resisting arrest, search or transport and interfering with public duties, Crockett said. They were quickly released. Crockett said that Craig's 15-year-old daughter was also taken into custody and released to an older sister.

Fort Worth police were heavily criticized for the way the call was handled. Officials on Monday emphasized the department's focus is on regaining the trust of the Fort Worth community. Fitzgerald said he hopes to speak to Craig as part of that process.

The chief said that after serving his suspension Martin will return to the neighborhood he previously patrolled to re-establish a relationship with the community.