Five killed in small plane crash in Louisiana, sports reporter among those killed

12:30 pm: The latest on the plane crash on Saturday morning that killed 5 people. One survivor was removed from the plane.

LAFAYETTE, LA — Five people are dead after a small plane crashed on a Lafayette road. Among those killed was Carley McCord, a reporter for New Orleans TV station WDSU-TV and a sideline reporter for ESPN and Cox Media, reports say.

The crash happened at about 9 a.m. local time near the intersection of Feu Follet and Verot School Road. Authorities responded to a small fire involving an eight-passenger plane and one vehicle, which was fully engulfed. Both fires were quickly extinguished, and a search and a rescue was conducted.

The NTSB says that the two-engine Piper Cheyenne, after departing from the Lafayette Regional Airport, crashed under unknown circumstances one mile west of the airport into the parking lot of the post office.

First responders say six people were on board the plane. Only one survived the crash; that passenger, identiified as Stephen Wade Berzas, is currently in critical condition.

Those killed in the crash have been identified as McCord, Ian Biggs, Robert Crisp II, Gretchen Vincent and one teenaged passenger.

According to the Associated Press, McCord was traveling with the group to attend the Peach Bowl in Atlanta, where her father-in-law, Steve Ensminger, would be coaching as offensive coordinator for LSU. Ensminger coached in the game, a 63-28 win over Oklahoma.

"I just don't feel like this is real," Ensminger Jr. told the Associated Press in an Instagram message. "I'm praying it's not real."

Biggs was listed as the plane's pilot. The rest of those aboard the plane were either employed by Global Data Systems or were family members of those at the company.

Three people on the ground were treated from injuries and transported to a local hospital.

The owner of a Lafayette jewelry store has confirmed that his daughter was one of the victims on the ground that was injured following the plane crash.

Witnesses say that the plane hit a power line while trying to make an emergency landing.

"When that airplane tilted, it hit that post first, then hit that Suburban and Jeep. Then it just blew up," an eyewitness said.

The Lafayette Fire Department's Chief Robert Beniot confirmed that the plane took off from the Lafayette airport en route to Atlanta prior to the crash. 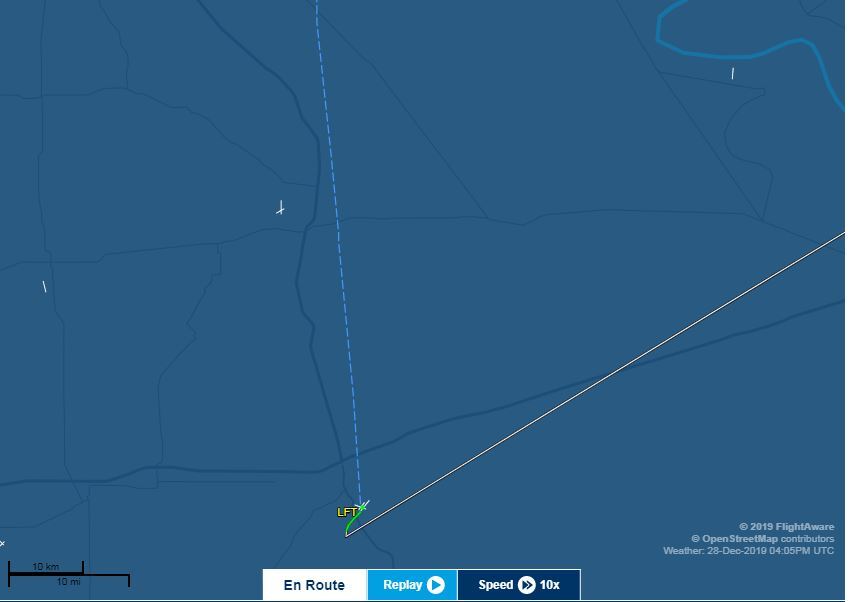 A resident in the area says that the weather may have been a factor in the crash.

"He was crashing; he was going down. I think he got inverted in the fog and couldn't see," nearby resident Terry Lavergne said. "Once he came out of the fog, he wasn't high at all. I think he tried to throttle up, and by the time he throttled up, he was facing the ground. He hit hard."

Both the FAA and NTSB investigators are on their way to the accident site and will be taking over the scene to conduct a full investigation.

The impact of the crash blew out the windows of the US Post Office off of Verot School Road. The Walmart near the scene was evacuated and closed.

Two post office employees were transported to a local hospital for evaluation. The status of their injuries is unknown.

Many businesses and houses in the area are currently without power.

This story was originally published by KATC in Lafayette, Louisiana.