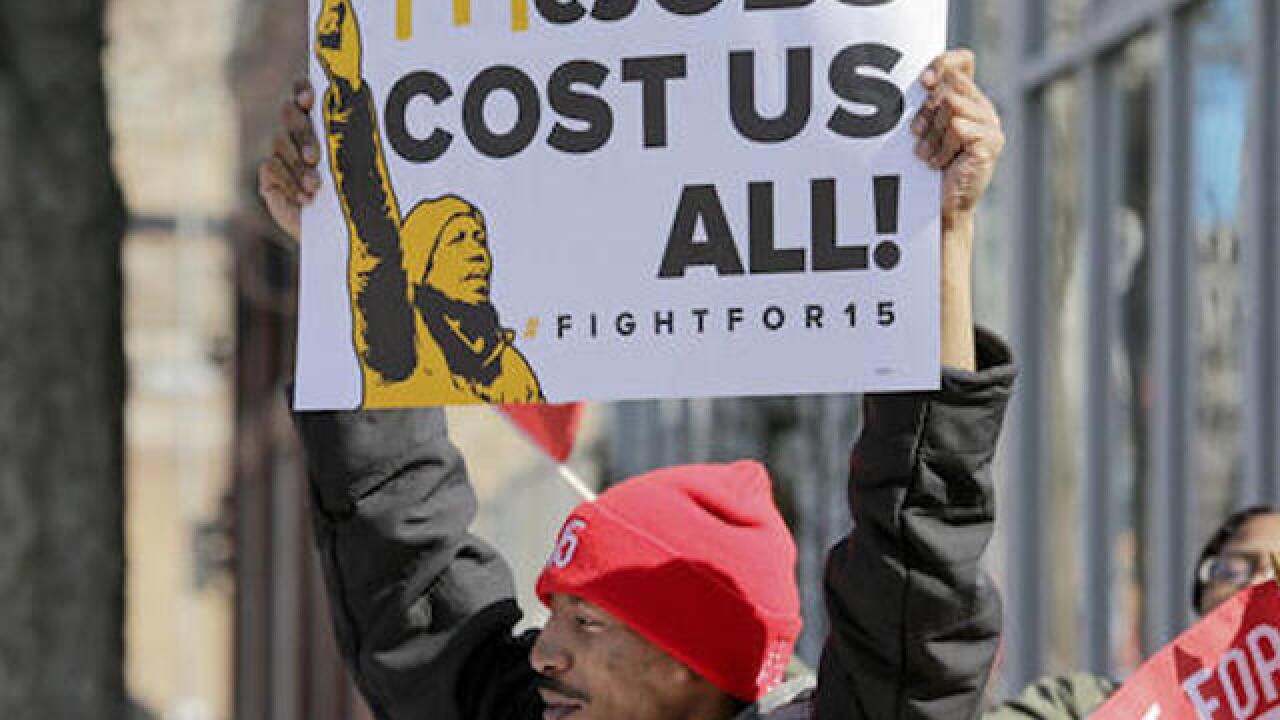 Teresa Crawford
<p>Solo Littlejohn, a fast food worker from Cicero, Ill., joins protesters calling for a union and pay of $15 an hour outside a McDonald's restaurant in Chicago on Thursday, April 14, 2016. The "Fight for $15" is part of an ongoing push targeting the world's biggest hamburger chain. (AP Photo/Teresa Crawford)</p>

NEW YORK (AP) — Protesters calling for pay of $15 an hour and a union were at McDonald's restaurants around the country and overseas Thursday as part of an ongoing push targeting the world's biggest hamburger chain.

The "Fight for $15" campaign says low-wage employees including airport workers, adjunct professors and home care workers turned out to show their solidarity with fast-food workers. They say they're targeting McDonald's because of its ability to influence pay practices throughout the economy.

The push is being backed by the Service Employees International Union and began in late 2012, with striking fast-food workers in New York City. Since then, the growing demonstrations have helped make hourly pay a major political issue.

The success has prompted organizers to expand their push to energize new swaths of workers to fight for higher pay and unionization.

Organizers said strikes and protests were planned for cities including Boston, Chicago, Los Angeles and Miami. In Paris, about 100 people waving red union flags protested outside a McDonald's restaurant at Disneyland.

In New York, demonstrators were planning to march crosstown to a Republican gala in the early evening.

The campaign is taking place as McDonald's Corp. tries to reinvigorate its business and win back customers. This week, executives met with franchisees in Florida for a bi-annual convention and discussed plans for a rebound.

Lisa McComb, a McDonald's representative, said the company gives workers access to programs that help them earn high school and college degrees. She noted McDonald's raised pay last year at company-owned stores in the U.S., which account for about 10 percent of its more than 14,000 locations. The hike for starting pay was for $1 above the local minimum wage.

"We proudly invest in the future of those who work in McDonald's restaurants," McComb said.

McDonald's workers called those measures a publicity stunt that failed to address the difficulties they face.

Sepia Rasheen Coleman, a home care worker in Memphis, Tennessee, said she became involved in the Fight for $15 campaign after an organizer reached out to her on Facebook. She said she was initially dismissive, but was later awed by the support for workers she felt at her first demonstration.

Since then, Coleman said she has been to Washington, D.C., for training on organizing protests.

"This is a mission, this is something I need to do," she said.