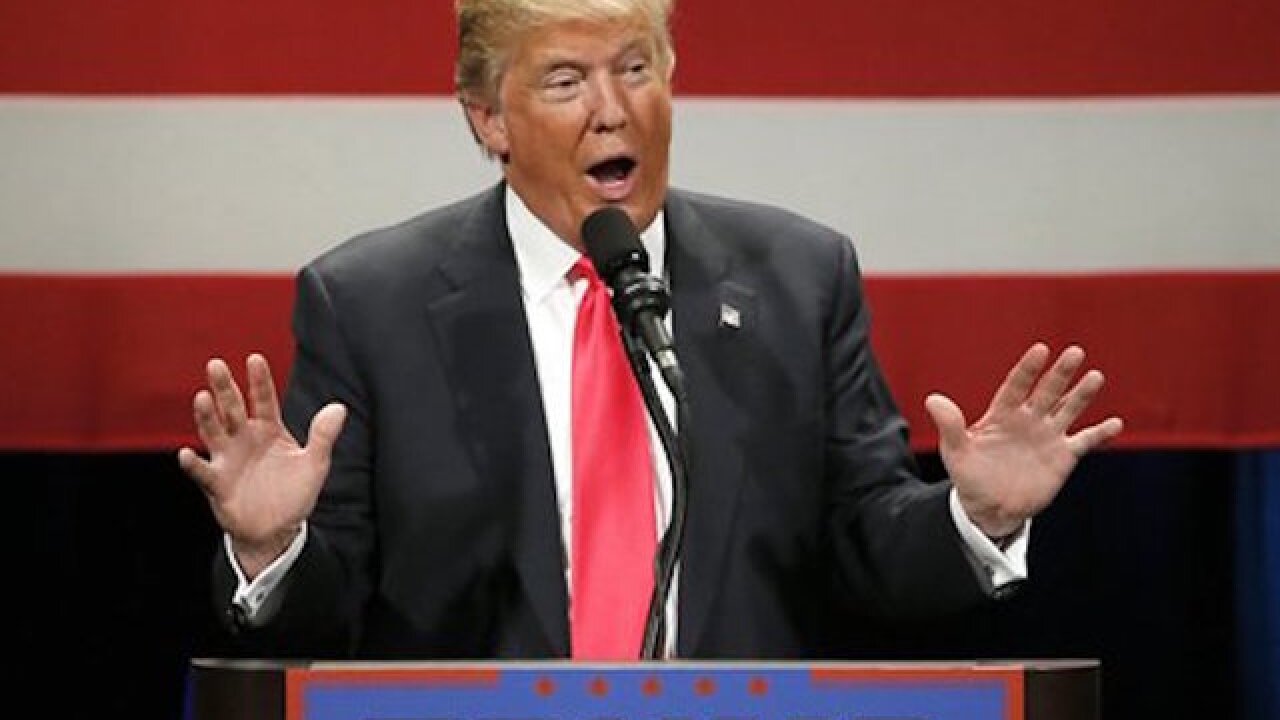 Copyright 2018 Scripps Media, Inc. All rights reserved. This material may not be published, broadcast, rewritten, or redistributed.
Charles Rex Arbogast
In this April 4, 2016, photo, Republican presidential candidate Donald Trump addresses the crowd during a rally at the Milwaukee Theatre in Milwaukee. He wonít be on Novemberís ballot, but President Barack Obama is slowly embracing his role as the anti-Trump, taking on the Republican front-runner in ways that no other Democrat can. (AP Photo/Charles Rex Arbogast)

By: Mina Abgoon
Posted at 10:55 PM, Apr 12, 2016
Donald Trump was joined on stage Tuesday night by his whole family, sitting in front of CNN’s Anderson Cooper and answering questions from a crucial New York audience.
The town hall event came exactly one week before the state was scheduled to vote in the primaries.
While the bulk of questions were directed at Trump’s family members -- his wife, Melania, and children Ivanka, Eric and Donald Jr. and Tiffany – a major focus centered on the Republican front-runner’s odds of winning the required amount of delegates to secure a nomination.
"I know the rules very well, but I know it's stacked against me by the establishment,” Trump said during the town hall, blasting the “unfair” results in Colorado that led to a win by his biggest competitor, Texas Senator Ted Cruz.
And proving he’s still not over the drama surrounding Louisiana – where he won, but Cruz could sway delegates – Trump noted that Republicans are simply working against his campaign rather than for it.
"They changed the rules a number of months ago," he told Anderson Cooper. "You know why they changed the rules? Because they saw how I was doing and they didn't like it."
There to bring seemingly new perspective on the billionaire was his family, who consistently boasted of Trump’s supportive and inspiring personality.
"His hard work ethic is truly inspiring. Whenever I'm at school studying these long hours ... It just makes me want to continue to work harder and improve myself and keep on pushing to my limit," 22-year-old daughter Tiffany Trump said in her first campaign appearance.
The family also touched on Trump’s treatment of women – a point of national controversy after multiple remarks and attacks aimed at figures like Megyn Kelly and Carly Fiorina.
According to Ivanka, her father’s respectful treatment of women is evident in how she and Tiffany were raised.
"It's a testament to the fact that he believes in inspiring women, in empowering women," Ivanka said, adding that Trump always insisted she "the potential to accomplish exactly what her brothers could."
His wife, Melania, said of the controversy: "He treats everyone equally, so if you're a woman and they attack him, he will attack back no matter who they are. We are all human. He encourages everybody, you're a man or a woman."
Other topics Trump’s family members touched on was the candidate’s controversial media postings and their wishes that he tone down his brash persona in the spotlight.
According to a recent Fox News poll, Trump has 54% of support among likely New York GOP primary voters, followed by with 22% for John Kasich and just 15% for Cruz.
Scripps Only Content 2016