Concussions landed atop NHL agenda in 2007 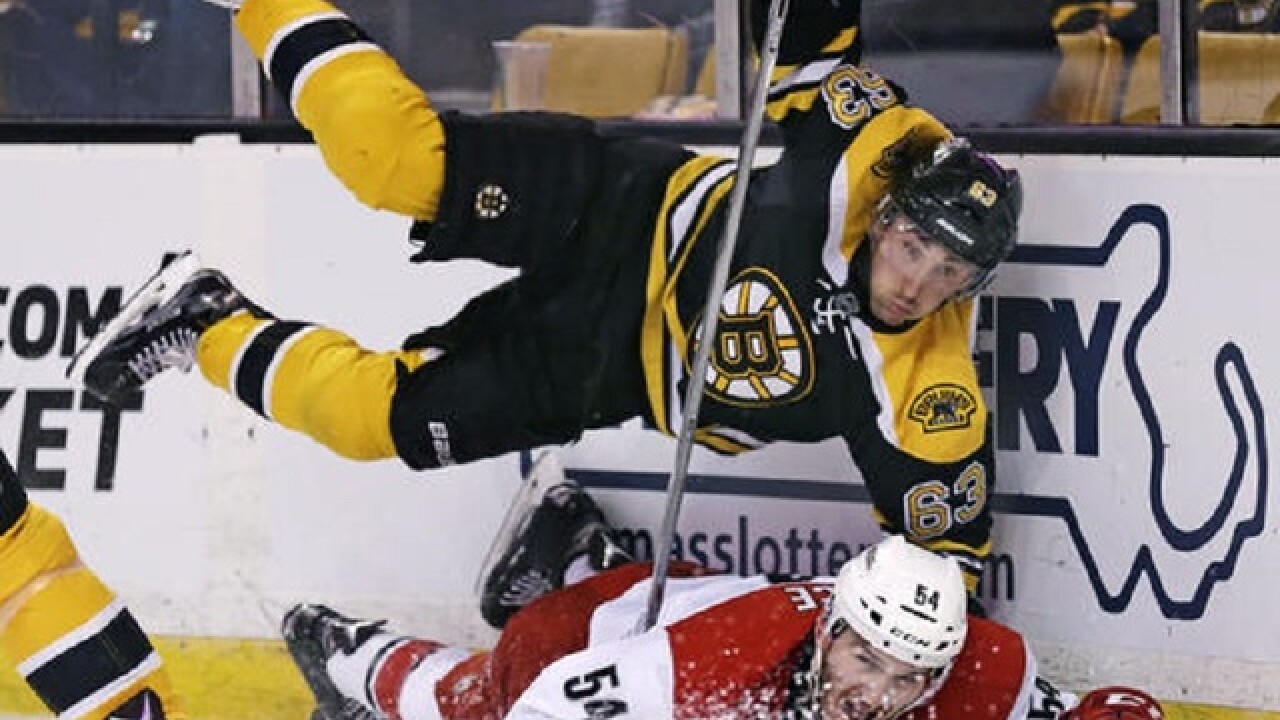 By: Associated Press
Posted at 2:39 AM, Apr 06, 2016
BUFFALO, N.Y. (AP) — During the 2006-07 season, a concussion sustained by Sabres co-captain Chris Drury — as a result of a blindside check by Ottawa's Chris Neil — placed hits to the head at the forefront of the NHL agenda.
It began with then-Sabres owner Tom Golisano's letter urging NHL Commissioner Gary Bettman to re-examine the rules after the league informed Buffalo that Neil's hit was legal. The concerns grew during the Stanley Cup Final, when Anaheim defenseman Chris Pronger was suspended for one game after elbowing Ottawa's Dean McAmmond in the head.
And it became a prime topic of discussion for the league's competition committee, according to the minutes of its June 15 meeting that were among hundreds of documents unsealed last week as evidence in the concussion lawsuit filed by former players.
"Gary Bettman states that the starting point for the discussion needs to be: Is there a problem? How do we define the problem? Do we want to do anything about this problem?" the minutes read.
Rangers forward and future NHL department of player safety chief Brendan Shanahan is quoted saying the league "should come down hard on players through supplementary discipline when they hit 'dirty.'"
NHL Players' Association representative Stu Grimson said Neil's hit was difficult to assess because Drury was not "unfairly vulnerable" after he had just taken a shot before being struck in the jaw from his right.
The minutes cite a consensus being reached, suggesting the rule should factor in whether the hit was late, the player struck was "unfairly vulnerable" and whether the hitter stalked his opponent and had a prior history of illegal checks.
All of these factors became part of "Rule 48: Illegal Check to the Head," introduced to the rulebook for the 2010-11 season.
It took the league three years to put it in writing.
Dr. John Leddy, a University at Buffalo clinical professor of orthopedics, thinks it would be impossible for the NHL to eliminate concussions. What matters, he says, is that the league has finally taken steps to reduce concussions by outlawing hits to the head while also placing an emphasis on how to spot and treat them.
"These rules are probably the most important things you can do because helmets don't prevent concussions," said Leddy, who is also head of the school's concussion management clinic. "Collision sports are inherently dangerous, but with rule changes you can make them less dangerous. And with better diagnostic protocols you can identify concussions and get them treated."
Leddy is regarded among the leading figures in concussion studies and treatment. He received funding assistance from the Sabres on concussion research because of his work spurring Buffalo center Tim Connolly's recovery from head and neck injuries that sidelined him for nearly the entire 2006-07 season — right when the NHL was first discussing rule changes.
Leddy hesitates in faulting the NHL for being slow to react.
"Everybody who was playing sports 30 years ago will tell you that nobody thought a concussion was an issue. It was a bell-ringer," Leddy said. "Could it have happened faster? Well, maybe. But I don't think people should be criticized 10 and 20 and 30 years ago for treating concussions differently back then because nobody really knew what concussions were or how serious they were."
The more than 100 former players who have joined the class-action lawsuit allege the NHL had the resources to better prevent head trauma, failed to properly warn players of such risks and promoted violent play that led to their injuries.
Associated Press 2016