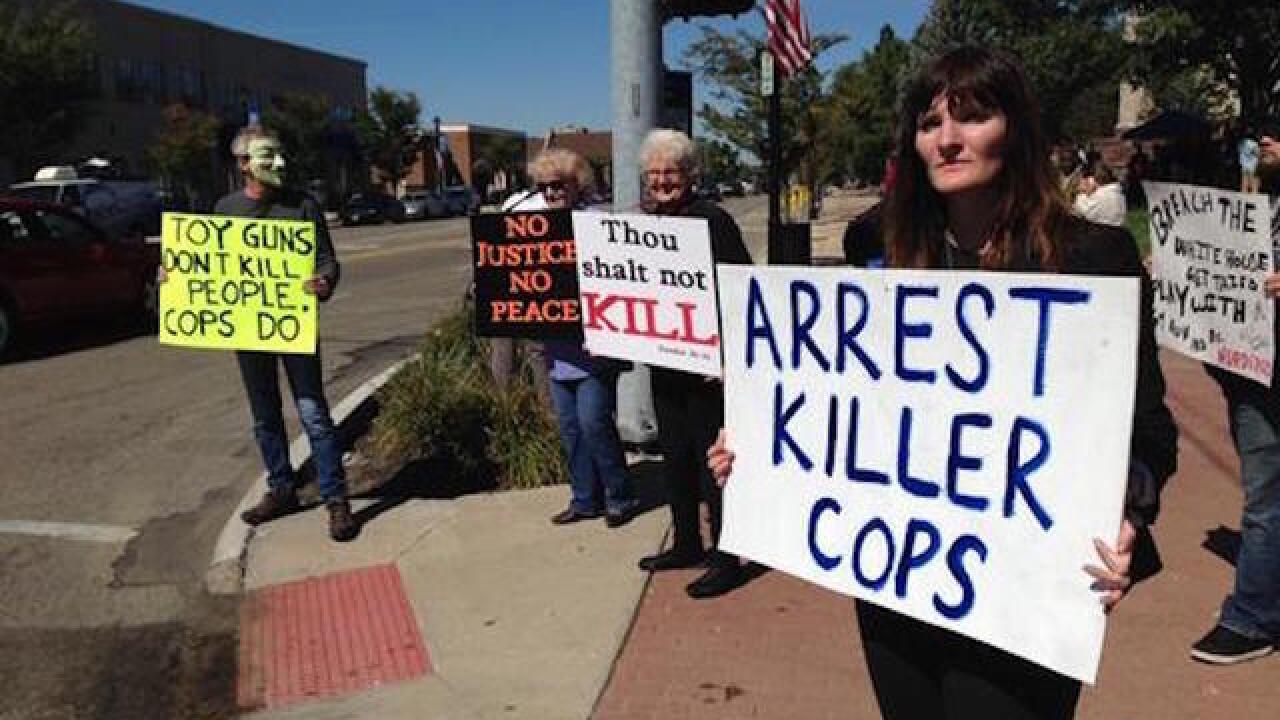 Copyright Associated Press
Ty Greenlees
<p>FILE- In this Sept. 22, 2014 file photo, people rally in support of John Crawford Jr. and his family in their pursuit for answers into the Aug. 5, 2014 shooting of John Crawford III, in Beavercreek, Ohio. A 911 caller who reported a man, who was later identified as Crawford III, waving a gun in a Wal-Mart before police fatally shot him and found he had an air rifle he took from a shelf could be charged with making a false alarm, according to a judge's ruling. (Ty Greenless, The Daily News via AP, File) </p>

CINCINNATI (AP) — Criminal prosecutions rarely result from an obscure law that private citizens have turned to in a push for charges in connection with a pair of fatal Ohio police shootings, according to legal experts.

The law allows private citizens to make complaints and have them reviewed by a judge who can refer them to a prosecutor for further review.

It was used unsuccessfully in an attempt to have Cleveland police prosecuted in the fatal shooting of 12-year-old Tamir Rice, who had a pellet gun near a recreation center. A judge found sufficient evidence to refer charges to a prosecutor, who then recommended that a grand jury not indict the officers.

This week, a judge found sufficient evidence to show a 911 caller could be prosecuted for making false alarms after he reported a man waving a gun in a Dayton-area Wal-Mart. John Crawford III, who was black, had picked up an air rifle from a shelf and was shot by a white officer responding to the Beavercreek store on Aug. 5, 2014.

Whether caller Ronald Ritchie will be charged is up to a prosecutor, Fairborn City Solicitor Betsy Deeds, who's reviewing the matter.

Ritchie, the only person to call 911 before shots were fired, reported a man walking around the store waving what appeared to be a rifle and "pointing it at people." The next day, Ritchie told authorities the man actually didn't point the firearm but swung it around and flashed the muzzle at children.

Nine citizens sought a judge's review of Ritchie's role by submitting surveillance video synchronized to the 911 call along with sworn statements accusing him of crimes including making false alarms, involuntary manslaughter, inciting violence and inducing panic. The judge concluded there wasn't sufficient evidence to merit a criminal complaint on any allegations other than making false alarms.

One of the filers, Beavercreek resident Lynn Buffington, said she doesn't blame Ritchie as much as she blames the officer who shot Crawford, but she's glad for the judge's finding and thinks what happens next is "anyone's guess."

"I don't have a specific desire for a specific crime or a specific punishment. I would just like to see our system of justice work — work toward justice, which means some accountability for this tragedy," Buffington, 63, said Friday.

Michael Benza, a criminal law professor at Case Western Reserve University in Cleveland, says the current version of the Ohio law used by the citizens dates to at least 1960 and was designed to get around prosecutors who — for whatever reason — refuse to pursue charges.

"The trouble is that the law contains no mechanism to compel prosecution," Benza said.

He and other legal experts also say that it would be difficult to prove beyond a reasonable doubt that Ritchie knew what he was calling in was false.

"When there are 911 calls or a police complaint, there are almost never any consequences for a false complaint," said Christo Lassiter, a criminal law professor at the University of Cincinnati.

A potential problem if Ritchie is charged is that others could be deterred from making 911 calls, legal experts said.

Prosecutor Deeds said in her statement Friday that she hopes that this week's decision doesn't have that effect.

Benza says private citizens rarely use the Ohio law and similar ones at the federal level and in other states to seek charges because prosecutors have that responsibility.

In Crawford's case, a grand jury concluded the shooting was justified, and the U.S. Department of Justice is reviewing the case.

Ritchie and his wife told investigators the gun looked like an assault rifle he owned and said they saw no orange tip to indicate it was an air rifle. Police also said they believed Crawford had a real rifle and said he didn't respond to commands to put it down — something the soundless surveillance video can't corroborate.

There was no answer Friday to calls to Florida and Ohio phone numbers currently associated with Ritchie's name. He lived in Riverside, Ohio, at the time of the shooting.

Crawford's relatives and their attorneys have said the 22-year-old posed no threat.

Ritchie isn't named in the family's lawsuit against the police and Wal-Mart. Though Ritchie was mistaken, the family blames police for what happened, family attorney Michael Wright said.