Brett Kavanaugh and accuser both to testify before Senate committee 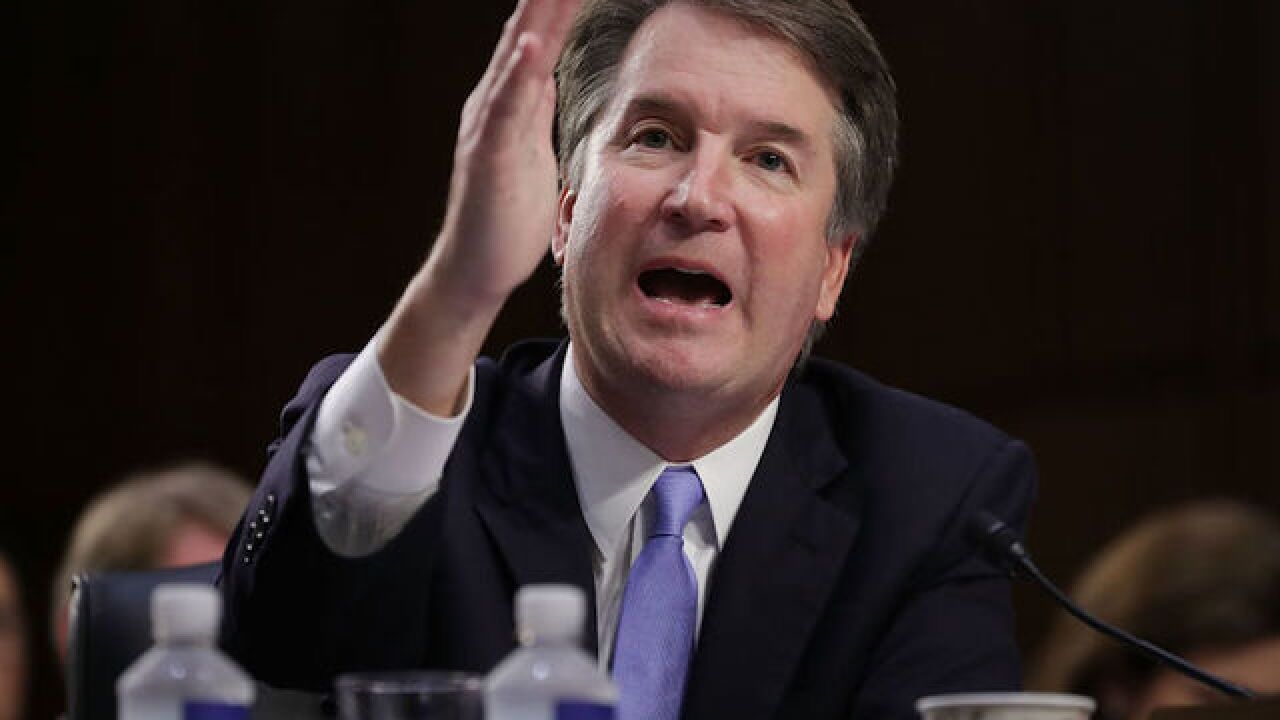 Image copyright 2018 Getty Images. All rights reserved. This material may not be published, broadcast, rewritten, or redistributed.
Chip Somodevilla
<p>Supreme Court nominee Judge Brett Kavanaugh testifies before the Senate Judiciary Committee on the third day of his Supreme Court confirmation hearing on Capitol Hill September 6, 2018 in Washington, DC. Kavanaugh was nominated by President Donald Trump to fill the vacancy on the court left by retiring Associate Justice Anthony Kennedy. </p>

The Senate Judiciary Committee has scheduled a public hearing on the allegations against Supreme Court nominee Brett Kavanaugh for next Monday, a congressional source tells CNN.

Kavanaugh and the woman accusing him of physical and sexual assault, Christine Blasey Ford, will testify, a source with knowledge of the schedule tells CNN.

Both have indicated they are willing to testify about the allegations.

"Judge Kavanaugh looks forward to a hearing where he can clear his name of this false allegation. He stands ready to testify tomorrow if the Senate is ready to hear him," White House spokesman Raj Shah said in a statement Monday.

Maine Republican Sen. Susan Collins, one of the key swing votes on the nomination, said she wanted both Kavanaugh and Ford to testify under oath before the Senate Judiciary Committee, which plans to vote on the nomination Thursday. Sen. Orrin Hatch, R-Utah, also called for both to testify, saying he spoke to Kavanaugh by phone Monday.

"I want to have both individuals come before the Senate Judiciary Committee and testify under oath," Collins said to reporters Monday on Capitol Hill. She said there are still a lot of questions, and "we need to know what happened."

"Obviously, if Judge Kavanaugh has lied about what happened that would be disqualifying," Collins said, but she added that she had spoken to Kavanaugh on the phone Friday and he had emphatically denied the allegations.

President Donald Trump said he's open to a delay in order to keep the process going and eventually confirm Kavanaugh.

"Judge Kavanaugh is one of the finest people that I've ever known. He is an outstanding intellect and outstanding judge respected by everybody. Never had even a little blemish on his record," Trump said. "If it takes a little delay, it'll take a little delay."

The statements allow for the possibility that Judiciary Committee would receive dueling testimony about the alleged incident decades ago, which could threaten Trump's attempt to install a conservative in the place of frequent swing vote Justice Anthony Kennedy, potentially altering the balance of the court for a generation.

The committee's chairman, Iowa Sen. Chuck Grassley, said he wants to set up phone calls with Kavanaugh and Ford, but did not say he would postpone the vote.

"Anyone who comes forward as Dr. Ford has deserves to be heard, so I will continue working on a way to hear her out in an appropriate, precedented and respectful manner," Grassley said.

The committee's 10 Democratic members want to delay the planned vote and allow for an FBI investigation before the panel moves forward. Senate Republicans hold a 51-49 majority and cannot afford two or more Republicans voting against Kavanaugh's nomination unless they pick up votes from Democrats.

In a statement on Monday, Kavanaugh called the allegation by Ford, who is a college professor, "completely false."

"I have never done anything like what the accuser describes -- to her or to anyone," Kavanaugh said. "Because this never happened, I had no idea who was making this accusation until she identified herself yesterday. I am willing to talk to the Senate Judiciary Committee in any way the committee deems appropriate to refute this false allegation, from 36 years ago, and defend my integrity."

Kavanaugh's statement came shortly after Ford said through her attorney that she would be willing to speak with Congress to tell her side of the story.

Kavanaugh was seen Monday morning arriving at the White House, which has stood by the judge in the face of the accusations. The 53-year-old judge was there to meet with the White House legal team to prepare for potential interviews or questions from the Judiciary Committee, a source familiar with the matter said.

According to multiple sources, Kavanaugh has hired Beth Wilkinson, of the law firm Wilkinson Walsh and Eskovitz, to be his attorney. Wilkinson has not returned calls from CNN seeking comment.

Ford went public with her allegation in an article published by The Washington Post on Sunday. In the article, she alleged that at a party during their high school years, Kavanaugh pushed her into a bedroom along with his friend Mark Judge, attempted to remove her clothes and put his hand over her mouth when she tried to scream.

Judge denied the allegation in an interview with The Weekly Standard on Friday.

While Ford initially sought to keep her allegation confidential, she said she opted to go public once the allegation emerged in the public eye and reporters began pursuing her. Her attorney, Debra Katz, told CNN on Monday morning that Ford would be willing to testify before Congress and stood by her story in the face of expected push-back.

Katz described Ford's recollection of the incident in stark terms, going as far as saying her client considered it an attempted rape.

"She believes that but for his inebriation and his inability to take her clothes off, he would have raped her," Katz said.

Ford's decision to go public prompted some key senators to voice support for a delay in Kavanaugh's nomination process, which is scheduled to be voted on in the Senate Judiciary Committee this week.

On Sunday evening, a pair of outgoing Republican senators said outright that the Senate Judiciary Committee should not vote on Kavanaugh's nomination until they talk to his accuser.

"I've made it clear that I'm not comfortable moving ahead with the vote on Thursday if we have not heard her side of the story or explored this further," Arizona's Jeff Flake, a member of the committee, told the Post.

Bob Corker also believes Kavanaugh's accuser should be heard out before the Judiciary Committee votes on his nomination, the Tennessee senator's spokesperson, Micah Johnson, said in a statement to CNN. Corker, however, does not sit on the panel.

While some Republican senators, such as Alaska's Lisa Murkowski, South Carolina's Lindsey Graham and Flake, are concerned with process, one source said that doesn't necessarily mean a long delay -- and the concern is that a long delay is what Democrats are pushing for.

One supporter of Kavanaugh also pushed back on some reporting that the White House or Republicans would deploy any aggressive attack, calling it "infuriating."

White House senior counselor Kellyanne Conway told reporters Monday that Ford "should not be ignored or insulted; she should be heard," adding that Ford should also testify under oath on Capitol Hill.