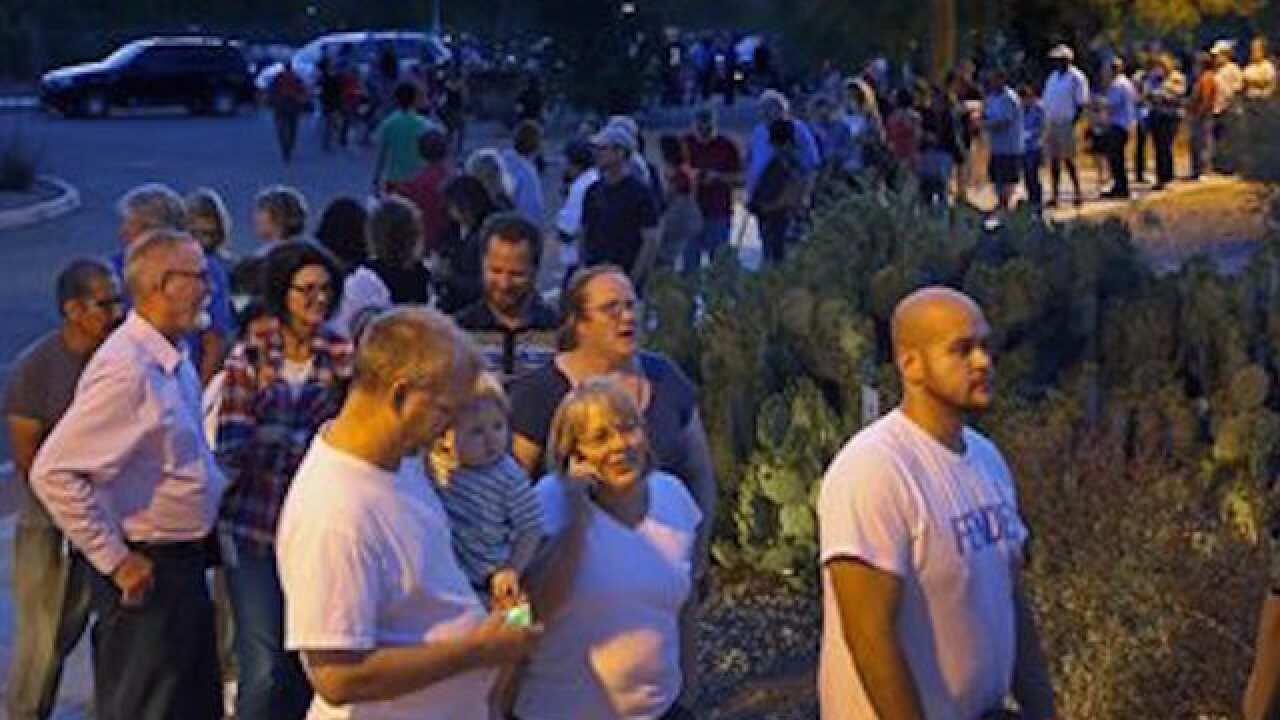 David Kadlubowski
<p>People wait in line to vote in the primary at the Environmental Education Center, Tuesday, March 22, 2016, in Chandler, Ariz. Residents in metro Phoenix have been bristling for years over a perception that state leaders want to make it harder for them to vote, and the mess at the polls Tuesday only heightened the frustration. (David Kadlubowski/The Arizona Republic via AP) MARICOPA COUNTY OUT; MAGS OUT; NO SALES; MANDATORY CREDIT</p>

PHOENIX (AP) — Hours-long waits for some Arizona residents wanting to vote in the presidential primary have led to accusations of voter suppression from Democrats and civil rights proponents who cite a decision by elections officials to slash the number of polling places this year.

Residents in metro Phoenix have been bristling for years over a perception that state leaders want to make it harder for them to vote, and the mess at the polls Tuesday only heightened their frustration.

Republican lawmakers passed a series of measures in recent years aimed at cracking down on voter fraud, but opponents believe the changes were merely ploys to stifle Democratic turnout.

Those battles are being waged again after people waited in line for five hours to vote in some places.

"Let's be clear — voter suppression happened," U.S. Rep. Ruben Gallego said at a news conference Thursday, adding it might not have been intentional, but it happened nonetheless.

The Phoenix Democrat said Arizona has a long history of voter suppression, including a new law that would block voter-outreach groups from collecting and dropping off early ballots.

Limiting the number of polling locations disproportionately affects minorities and the working poor, he said. They have a harder time finding transportation to polling locations and are less likely to have the time needed to wait in long lines.

Maricopa County's top elections official, Recorder Helen Purcell, cut the number of polling places in the presidential primary from 200 in 2012 to just 60 on Tuesday, although those were larger voting centers where any registered voter could cast a ballot. During the last high-turnout presidential primary, in 2008, there were 400 polling places in the county of 4 million residents.

Barton said Tuesday's fiasco largely stemmed from a 2013 U.S. Supreme Court ruling that struck down a key provision of that law.

The provision required Arizona and all or part of 14 other states to get Justice Department approval, or "pre-clearance," for changes in how they conduct elections.

"That's the first thing I thought when I saw these long lines. I said, 'Oh, Shelby County,'" Bender said. "If they had not gotten rid of Section 5 — practically gotten rid of it, that is removed the pre-clearance requirements — that never would have been pre-cleared."

Purcell took responsibility for Tuesday's foul-up and acknowledged she made a mistake. She said she relied on voter turnout expectations, the fact independents could not vote in the primary, and that most Arizonans are mailed early ballots. But she said the problems at the polls were in no way intended to suppress participation.

"When you see people who are still willing to cast that vote and wait in line until well after the polls close, I don't think that's voter suppression," Purcell said.

"It is totally unacceptable for people to have to wait in lines of that length to vote," he said. "This should be a basic function of government that we should be able to execute."

Ducey signed into law legislation making it a felony to collect an early ballot from a voter, a bill Democrats said was designed to limit their successful get-out-the vote efforts. Scarpinato said that's not the case, noting 18 other states have similar laws.

"The legislation that was signed earlier this month was designed specifically to ensure that there is integrity in the ballots cast," he said.

Teresa Jimenez was among those who waited in line for nearly two hours Tuesday in a heavily Latino neighborhood on the west side of Phoenix, only to have election officials close the site around 7 p.m. She went home without voting.

She said she and other voters — many of them Latino — were excited to cast ballots, but their enthusiasm vanished when the site shut down.

Jimenez believes the election represented an opportunity for Latinos who are fed up with years of discrimination in Arizona to make a statement. But she felt like the election problems put them back in their place.

"They do it to us," Jimenez said. "How are we supposed to hear our voices?"