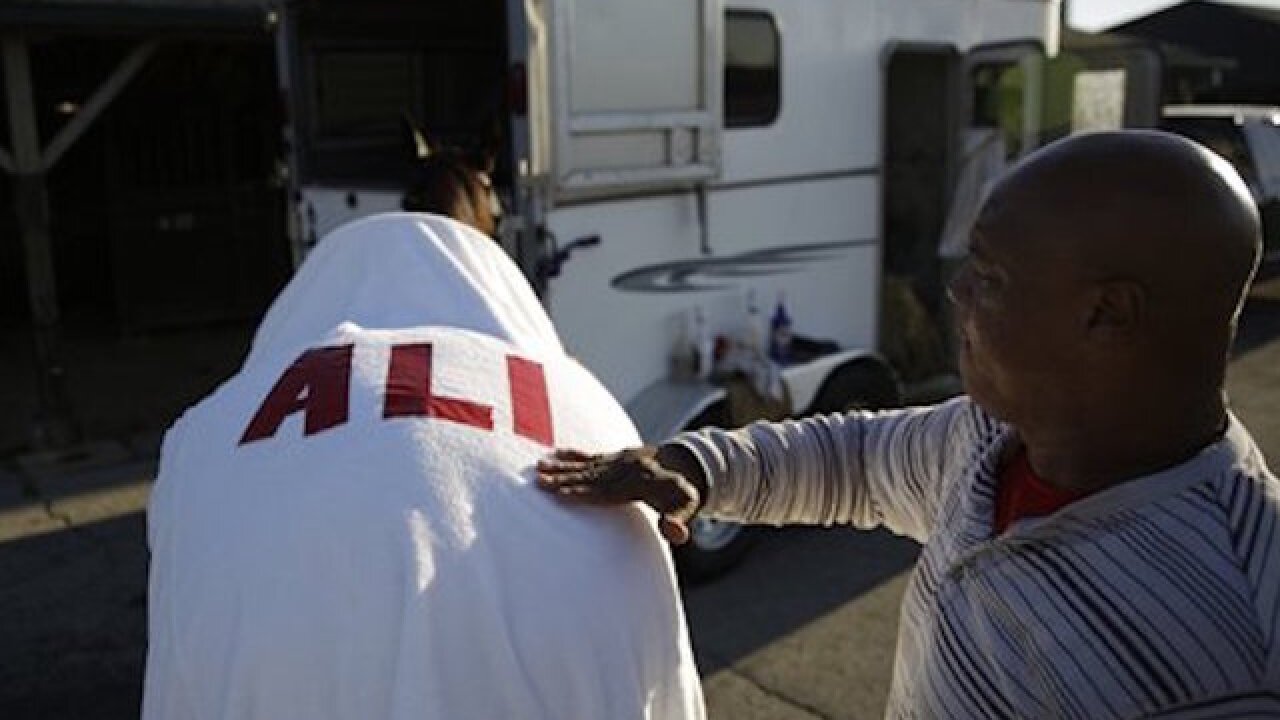 Copyright Associated Press
David Goldman
<p>Jerry Martin of Martinsville, Va. prepares his horse Rekoa outside of Freedom Hall where Muhammad Ali's Jenazah, a traditional Islamic Muslim service, will be held Thursday, June 9, 2016, in Louisville, Ky. Martin will walk the horse outside of Freedom Hall during the service. (AP Photo/David Goldman)</p> 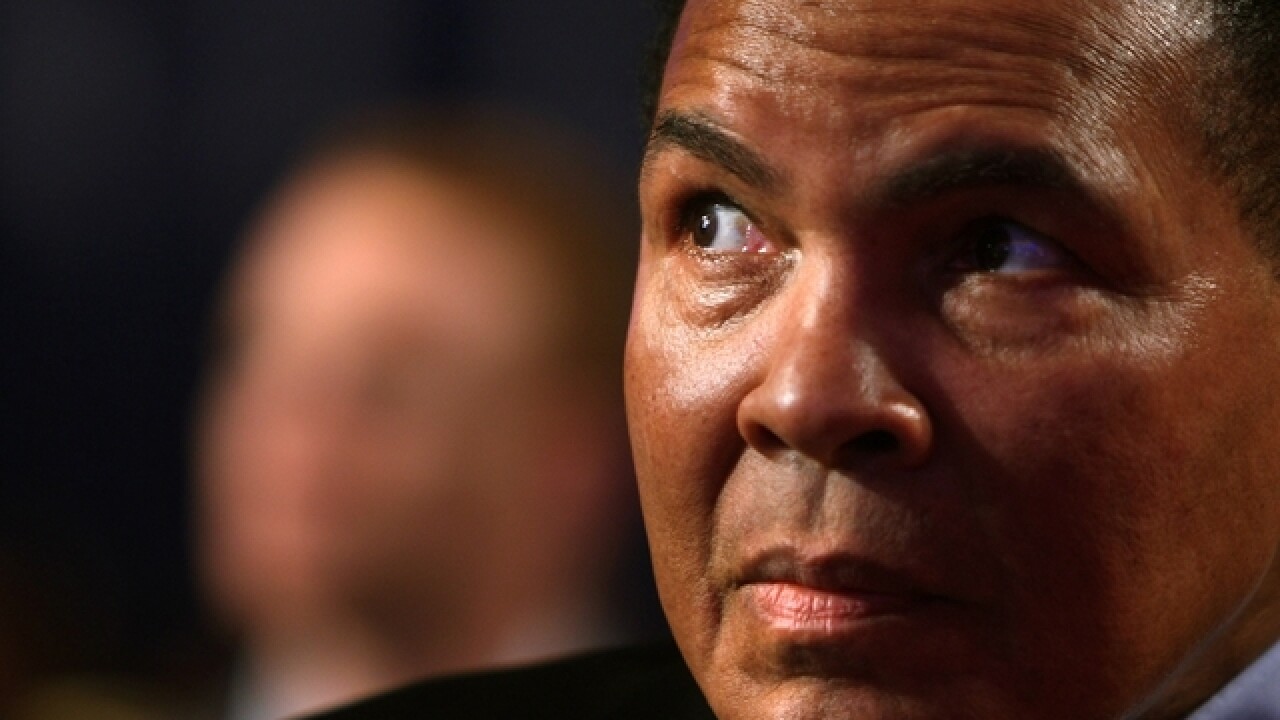 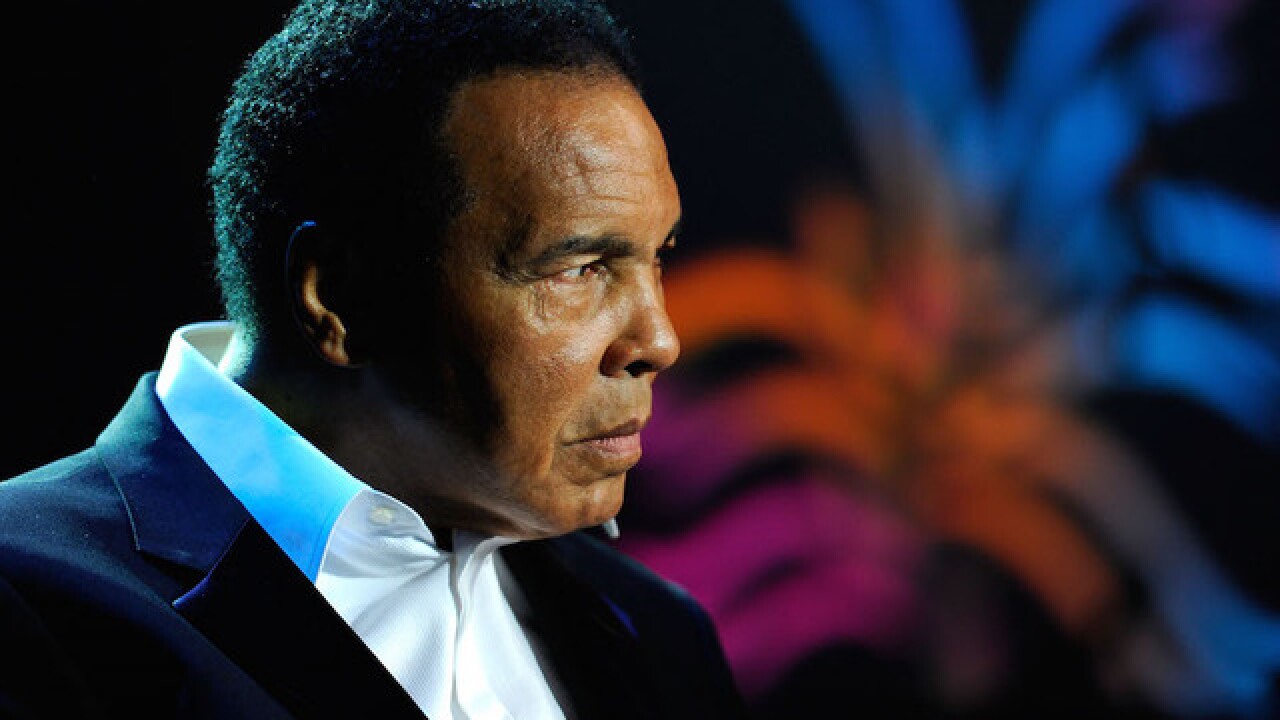 LOUISVILLE, Ky. (AP) — Mustafa Abdush-Shakur leaned on his cane as he limped into the arena to stand shoulder to shoulder with thousands of Muslims from around the world in a final tribute to The Greatest, Muhammad Ali.

He came 800 miles from Connecticut despite a recent knee replacement that makes it excruciating to walk.

"This is a physical pain," he said. "But had I not been able to come and pray for my brother, it would have caused me a spiritual pain and that would have been much deeper."

He never met Ali, but he felt it was his duty to pay his respect to the boxing giant, as famous for his faith as for his fists.

"I came to pray for my brother and ask our lord to grant him the highest place in paradise because I believe that he is deserving," Abdush-Shakur said.

He will join more than 14,000 people who have tickets to Thursday's Jenazah prayer service, a traditional Muslim funeral service that will be broadcast worldwide and streamed online, offering a window into a religion many outsiders have come to scorn. U.S. Muslims hope the service will help underscore that Islam is fully part of American life. Ali insisted the service be open to all.

"Muhammad planned all of this," said Imam Zaid Shakir, a prominent U.S. Muslim scholar who will lead Thursday's prayers. "And he planned for it to be a teaching moment."

Mourners began arriving shortly after the doors opened at 9 a.m. The attendees were young and old; black, white and Arabic. Some wore traditional Islamic garb, others blue jeans or business suits.

A fellow Muslim who shares the boxing great's name arrived with no hotel reservation, just a belief that this 8,000-mile pilgrimage was important to say goodbye to the global icon considered a hero of his faith.

Mohammad Ali met the boxer in the early 1970s and they struck up a friendship based on their shared name. The Champ visited his home in 1978 and always joked he was his twin brother, he said. He stood weeping at the funeral, a green Bangladeshi flag draped over his shoulder, holding snapshots he took of the boxer during his visit, one standing with his family, another of him sprawled on a bed in his home.

Ali, who died Friday at 74, famously joined the Nation of Islam, the black separatist religious movement, as a young boxer, then embraced mainstream Islam years later.

"One reason Muhammad Ali touched so many hearts, he was willing to sacrifice the fame, the lights, the money, the glamour, all of that, for his beliefs and his principles," Shakir said. "That's moving and that touches people."

Timothy Gianotti, an Islamic scholar at the University of Waterloo in Canada, has worked for years with the Ali family to plan the funeral. He said the service will consist of short prayers said over Ali's coffin, facing Mecca.

The Jenazah service lasts only about 20 minutes, with people customarily standing in lines as they recite the prayers. At Ali's service, Muslims lining up to join the recitation will be separated by gender, but the wider audience will not, Gianotti said.

The faithful will stand shoulder to shoulder, row after row, Gianotti said. They expect so many they will fill the massive north wing of the Kentucky Exposition Center and spill over onto the main court of Freedom Hall.

The service is composed of four recitations of "Allahu Akbar" or "God is Great," with silent prayers between of a reading from the first chapter of the Quran, a blessing for Abraham, a general prayer for the well-being and forgiveness of the deceased for the next life and a prayer for everyone at the funeral, Gianotti said.

An interfaith memorial service is set for Friday and will be attended by dignitaries from around the world and include representatives of several religions, including Jews and Christians.

A miles-long processional will pass many points in the city where Ali left his imprint, including a museum in his honor downtown, a boulevard named after him and his childhood home. President Bill Clinton will deliver the eulogy; actor Will Smith is a pallbearer. Boxing greats, celebrities and heads of nations will be there.

All 15,500 tickets for Friday's memorial were claimed within an hour.

Organizers said the Thursday event was designed as a more somber moment to allow Muslims a chance to say goodbye to one of their own.

The memorials are taking place after a burst of assaults on U.S. mosques and Muslims following the Islamic extremist attacks last year in Paris and San Bernardino, California, and anti-Muslim rhetoric in the presidential election.

Organizers of Ali's memorials say the events are not meant to be political. Still, many Muslim leaders say they are glad for the chance to highlight positive aspects of the religion through the example of Ali, one of the most famous people on the planet.

"In this climate we live in today, with Islamophobia being on the rise and a lot of hate-mongering going on, I think it's amazing that someone of that caliber can unify the country and really show the world what Islam is about," said 25-year-old Abdul Rafay Basheer, who traveled from Chicago for the service. "I think he was sort of the perfect person to do that."

Muslims typically bury their dead within 24 hours, but the timeline is not a strict obligation, and accommodations are often made, either to follow local customs or, in the case of a public figure like Ali, provide time for dignitaries and others to travel. Ali died in Arizona and time was needed to transport his body to Louisville, Gianotti said.

Gianotti said by phone that he and three others — two Phoenix-area Muslims and Imam Zaid Shakir, a prominent U.S. Muslim scholar who will lead Thursday's prayers — washed, anointed and wrapped Ali's body within a day of his death. The body is typically wrapped in three pieces of simple fabric.

"The idea is to remind those who are still alive that when you came to life, you were completely money-less and you will leave money-less," said Imam Yahya Hendi, the Muslim chaplain at Georgetown University and a specialist in Islamic studies. "What matters is if you live a simple life or do good."

Abdush-Shakur said his death feels like a loss to the entire world because he had an "ability and a capacity to reach into places and to people who the average person wasn't able to reach."

"But there is no need to be sad for him," he added. "We are all going to make that trip."