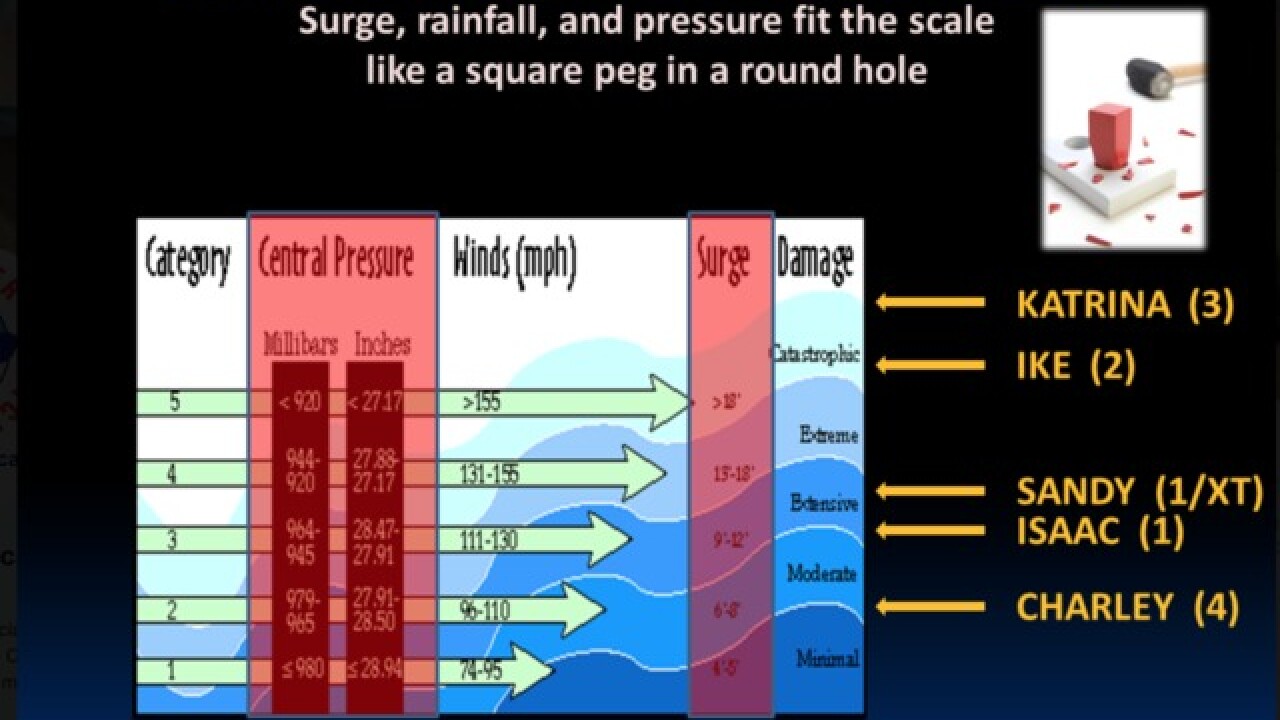 Some experts are renewing calls to expand the scale used to measure hurricanes by adding a sixth category of storm as the flood-weary Carolinas battle the remnants of Hurricane Florence five days after landfall.

The Saffir-Simpson Hurricane Wind Scale denotes the maximum wind speed of a storm, ranging from a Category 1 to Category 5. A Category 1 storm can still be dangerous -- as Florence was when it slammed into the North Carolina coast Friday -- with winds of 74 to 95 mph, but a Category 5 is catastrophic, with winds of 157 mph or higher.

Longtime CNN meteorologist Chad Myers, who has been in the thick of some of the worst storms over the past few decades, questions the need for changing the long-established scale.

"I don't think creating a sixth category makes sense," Myers said. "None of the recent large storms exceeded the current Saffir-Simpson wind scale. They were large storms, which delivered the expected impact indicated by the forecast."

Myers said there may be too much of a focus on a single number.

"The fact that a category is only describing a concentrated wind event occurring near the eye tells you nothing about the rest of the storm," he said. "It might be time to take it a step further."

Florence dropped dramatically from a Category 4 hurricane on Thursday to a Category 2 and then a Category 1 when it made landfall Friday morning near Wrightsville Beach, North Carolina.

The decline in wind strength may have caused some residents to let down their guard despite dire warnings from the National Hurricane Center that catastrophic damage might take parts of the Carolinas weeks or months to recover.

In fact, in light of the downgrade on winds, Myers emphasized the likely storm surge during his coverage, practically ignoring the wind speeds and focusing on the expected inundation. Frequently, he noted, "The surge from this storm will be like a Category 4 storm, even though the winds in the eyewall are a Category 2."

Instead, Myers suggested a three-tiered scale incorporating all aspects of a storm's danger when it makes landfall and beyond.

"We should be helping people understand what a storm will do, not just how strong it is while over warm water," he said.

His solution would be to rate the threats for each aspect of a storm. For example, Florence could have been described as a Category 1 for wind, a Category 3 for storm surge and a Category 5 for flooding.

He said focusing on the threats might help local, state and federal officials as well as the public make more informed decisions and plans.

"The challenge is people like to focus on single numbers, like the Dow Jones (industrial average)," Myers said.

When it comes to making life-or-death decisions, the category of a past storm shouldn't be the driver for action, he said.

The public is more informed and smarter than most officials think, especially in the digital age, Myers said. By providing people with the best information, he said, they will make even better decisions.