A list of celebrities accused of sexual assault or harassment

Many claims made since Weinstein investigation 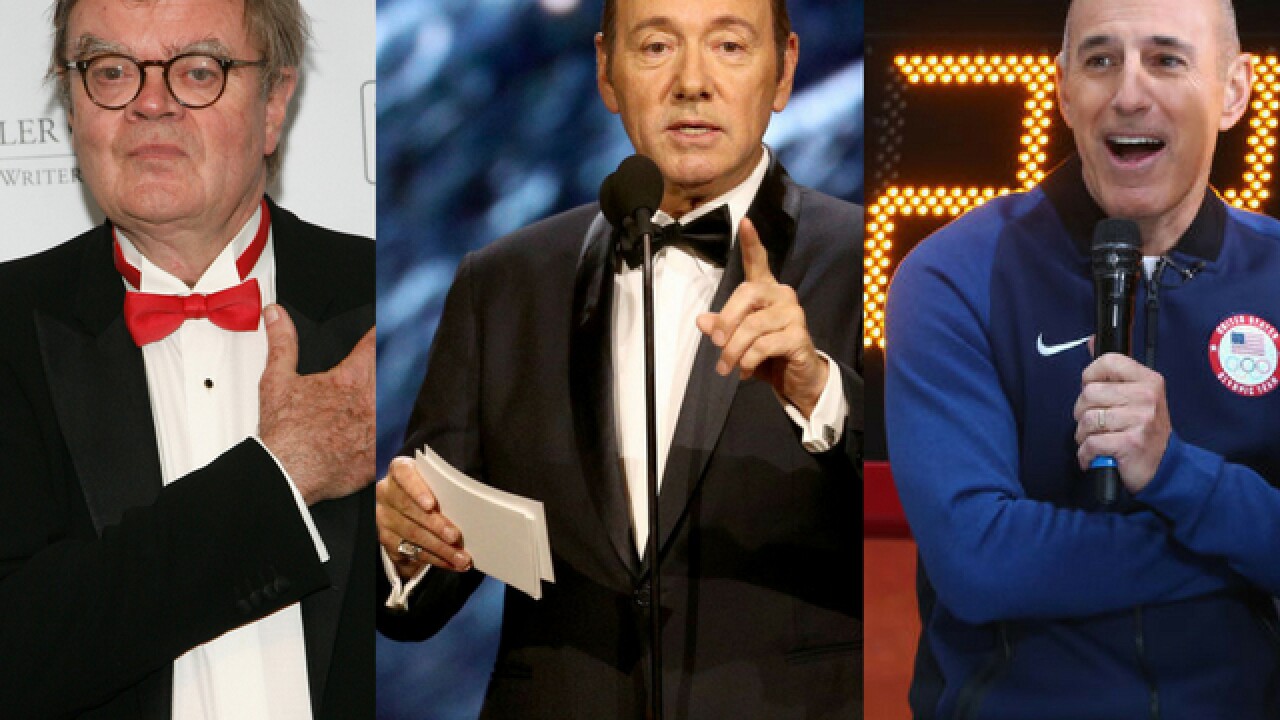 Copyright Getty Images
<p>From left to right: Garrison Keillor, Kevin Spacey, and Matt Lauer are just some of the many known personalities who have had accusations of sexual harassment or assault made against them in 2017.</p>

New sexual harassment and assault claims against celebrities and notable personalities have been made nearly every week since an early October article by the New York Times that accused Hollywood film producer Harvey Weinstein.

Weinstein: Sexual assault claims against the movie mogul came to light after the NYT article published online Oct. 5. More than 50 women have come out accusing him of misconduct since then.

Actor Kevin Spacey: On Oct. 29, he was accused by "Star Trek" Discovery actor Anthony Rapp of making sexual advances toward him when he was a teenager. Since then, several more men came forward to say they were harassed by Spacey, and five said it was when they were teenagers.

NPR top editor Michael Oreskes: On Oct. 31, two former co-workers at other media organizations accused Oreskes of unwanted physical contact made with them two decades ago. He resigned from NPR on Nov. 1.

Comedian Louis C.K.: Five women accused him of sexual misconduct in a report that appeared in the New York Times on Nov. 9.

Republican senate candidate Roy Moore: Nine women have accused the Alabama candidate of sexual misconduct against them; allegations began when the Washington Post published an investigative piece about it Nov. 9.

U.S. Senator Al Franken: Four women have accused Franken of groping or touching them inappropriately. It started when a radio show host came forward Nov. 16 with a photo of him in his role as a comedian groping her while she was asleep.

U.S. Rep. John Conyers-D Mich.: After allegations of unwanted advances came out against him Nov. 20, Conyers, age 88, stepped aside as ranking member of the House Judiciary Committee. He had served as chair or ranking member since 1995.

Pixar co-founder John Lasseter: A Nov. 21 story by the Hollywood Reporter says Lasseter is taking a leave of absence from Disney amid sexual assault allegations and "missteps" that caused others to feel uncomfortable.

NBC anchor Matt Lauer: After a woman and her lawyer visited NBC executives and said anchor Matt Lauer had sexually harassed her, he was fired by the network Nov. 29 — just more than 30 hours after the allegations came to light. The network said they do not believe it was an isolated incident.

Minnesota Public Radio host Garrison Keillor: The creator of "A Prarie Home Companion" announced Nov. 29 he had been fired after allegations of “inappropriate behavior with an individual who worked with him.” Keillor is 75 years old.

These are not the only notable people to have accusations made against them, according to an article by the New York Times that lists 34 men.