Opponent calls for Nick Mosby to pull out of race

Tax lien against Democratic nominee for Council President & his wife 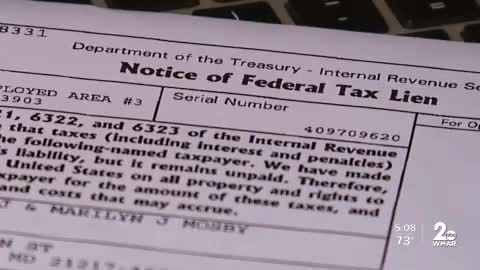 Opponent calls for Nick Mosby to pull out of race

BALTIMORE — The $45,000 tax lien against Nick and Marilyn Mosby’s house on Bolton Street represents an October surprise before the November election, and Mosby’s Republican opponent, Jovani Patterson, says the former councilman and state delegate should do the voters a favor by pulling out of the race to become the Baltimore City Council President.

“I strongly would suggest the the Mosby’s actually kind of pay attention to what’s going on with their personal finances before being concerned with what’s going on with the $3 billion budget of the city,” said Patterson. “My plea is for him to actually drop out of the race, because at this point, it just demonstrates that there is some level of mismanagement within the household.”

In his career as a tax attorney, Juda Gabaie says $45,000 pales in comparison to other IRS cases he’s dealt with, and the complications of pulling money out of a 401k can involve what qualifies as an exemption and what does not.

“It does not necessarily mean a wrongdoing,” said Gabaie. “What happens is you have this liability and you’re contesting it with the IRS, and you’re going back and forth with the IRS to try to get this resolved and being the sometimes the IRS takes a little bit longer than usual, before you know it a lean might get filed just because the IRS wants to protect its interests.”

In a written statement, Nick Mosby says as much mentioning he has “been in ongoing conversations with the IRS for five years about the tax consequences of an early withdrawal from (his) retirement savings plan, which (he) did to support unplanned expenses after a series of family tragedies.”

But at a time when Marilyn Mosby already has the city inspector general investigating her travel and business ventures as the city’s top prosecutor, there’s little question the lean against their home has opened the political couple up to scrutiny in the midst of a campaign season.

“This is an example of two people from the same household having too much power within the city,” said Patterson. “And what would be the consequence if we have now two people in positions of power that would then lose their positions? So now we’ve vacated two high-powered seats within the city government.”

For the record, Nick Mosby also said in a written statement that he expects to have the tax issue with the feds resolved in the coming days.