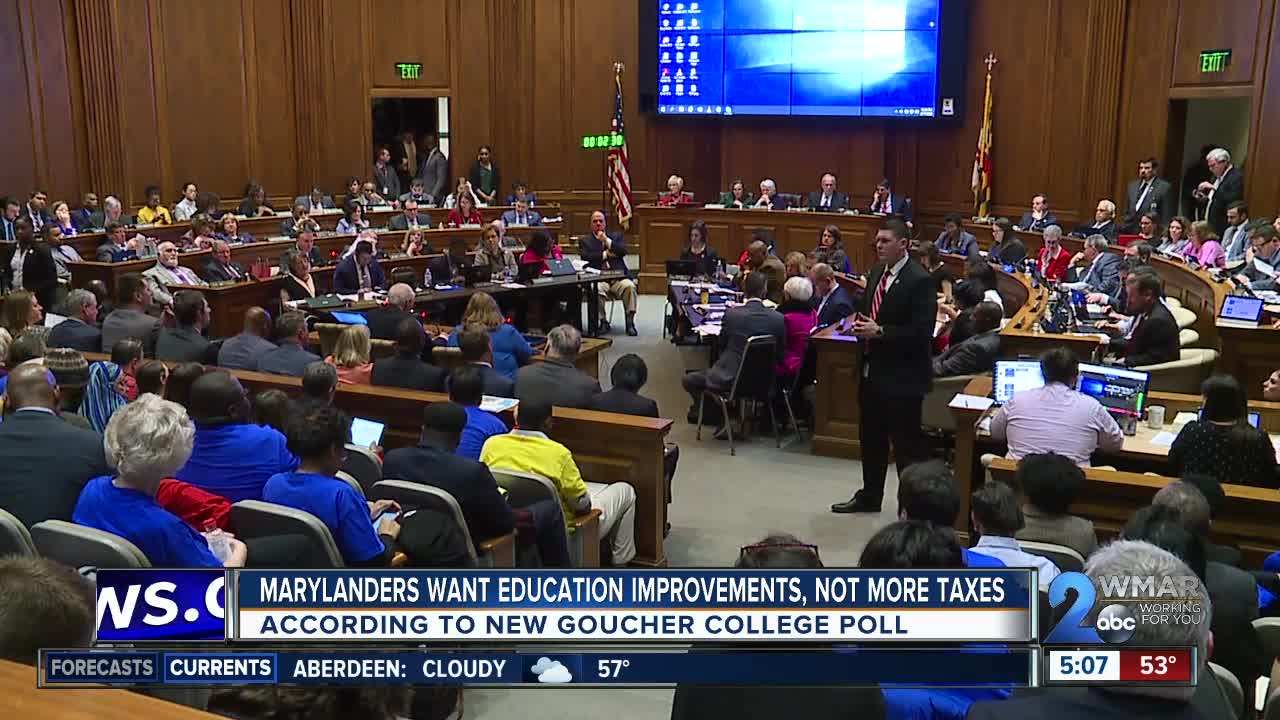 The General Assembly is now considering the Blueprint for Maryland's Future, a bill to transform the public school funding formula to improve education for all students based off of recommendations from the Kirwan Commission.

"We have a major educational overhaul happening in the state, getting pushed through the general assembly and what we find is by and large, Marylanders are behind some of the key components of the Kirwan Commission," said Dr. Mileah Kromer, director of the Sarah T. Hughes Field Politics Center at Goucher College.

While 69 percent of those polled said they have heard or read “nothing at all” about the commission, the majority support the initiatives in the recommendations:

The Kirwan Commission recommends spending nearly $4 billion more annually on education by 2030. Gov. Larry Hogan argues that fully implementing everything would cost $32 billion over those 10 years. The question, reflected in the discourse in Annapolis and in this poll, is how to fund it. The poll shows that 51 percent of Marylanders say that the overall amount of state taxes they have to pay is “too high” and 44 percent say it’s “about right.”

"It's the conflict between pocketbook issues and education issues, you're seeing that come together right now and we have the rest of the legislative session for the lawmakers to decide how exactly they are going to implement the recommendations of the Kirwan Commission," said Kromer.

Lawmakers are considering a bill to expand the sales tax to cover services to pay for the blueprint, equating to about $3 a week in new taxes for the average family.

"Bottom line is we deserve to have the best schools in the country out kids deserve to have access to a great education this is a way we can get there," said Montgomery County Delegate Eric Luedtke, the bill's sponsor. "It's not the only option its one option on the table."

The poll shows most don't support it. Neither does Hogan.

"It is a tax on working families. It's a tax on single moms," said Hogan. "It would destroy our economy."

"Since government should reflect the will of the people, I think it’s a good thing that the same sort of debates we're having by our elected lawmakers in Annapolis both those in the ga as well as gov. hogan are also what Marylanders really feel.

More from the poll:

Back in October 2014 and September 2016, the Goucher College Poll asked Marylanders about two outbreaks impacting them at the time:

This Goucher College Poll was conducted from February 13-18. For the full results of the poll, click here.

The second part of this Goucher College Poll focused on Maryland's upcoming democratic presidential primary election and how Democrats stack up to President Trump right now. The results of that poll will be released Tuesday at 12:01 a.m.