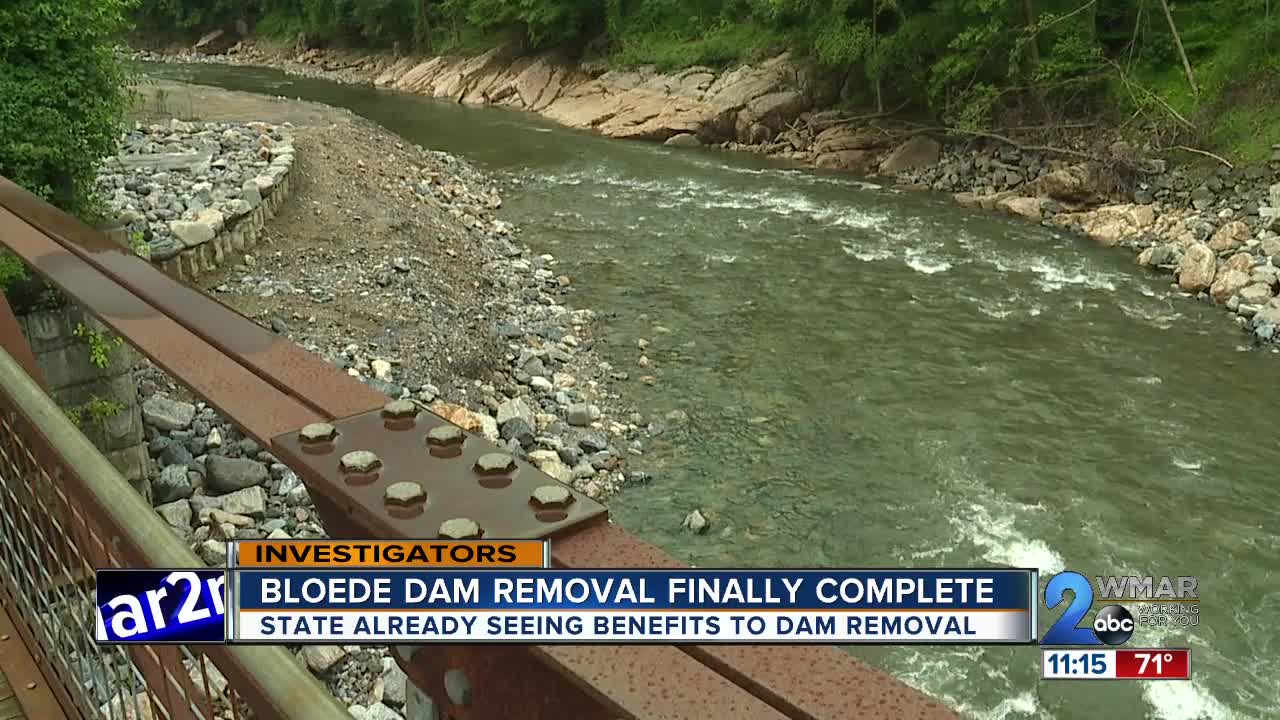 The Bloede Dam was built in 1907, became obsolete 20 years later, and then served as a nothing more than a blockage on the Patapsco until last September, when the Maryland Department of Natural Resources breached Bloede.

BALTIMORE — The river now runs through it.

[So after about a hundred years, it's gone?]

"It is, isn't it fantastic?" responded Serena McClain, Director of River Restoration for American Rivers. “I get stupid excited, honestly. I feel a little naive at the level of excitement that I have watching this river restore itself.

After eight years of planning, McClain can finally see the Patapsco River flow the way nature intended, for the first time in more than a century.

The Bloede Dam was built in 1907, became obsolete 20 years later, and then served as a nothing more than a blockage on the Patapsco until last September, when the Maryland Department of Natural Resources breached Bloede.

It took nearly a year to remove the entire structure and grade the river bank; just last month, the last of the construction crews left Patapsco Valley State Park.

Bloede was the last of three dam removals along the waterway, but it was by far the biggest and most important.

“There was a dam here that people kept dying at,” McClain said, “We were able to track at least nine deaths since the 1980s, and I think, as you and a lot of the viewers know, especially in like in 2015, 2014, year after year after year someone else would like, die at the dam because they were swimming and playing down below it. So, the ability to get that out and remove that safety hazard feels huge.”

The most immediate benefit of the Bloede Dam being destroyed is obviously the public safety angle, but there is also a large ecological benefit as well; one that experts say could take years to happen.

But already, Jim Thompson with the Department of Natural Resources is seeing it.

“I am,” Thompson said, “Ya know we've had this in mind. We did Union and Simkins Dams before, so we had an idea what to expect, but to see it happen here so quickly is just amazing.”

DNR is just beginning its survey of river life post damn removal, catching and measuring American eel, sun fish — eventually shad and herring, tracking all the migratory fish to see the impacts of the species finally able to migrate above where Bloede was.

All of it is good for the river and better for the bay.

“It's very important. The Patapsco is a giant contributor to the bay watershed, and it goes right down to the Inner Harbor, so this water is visible I guess more so than other rivers. And with the addition of the eels going up stream, it starts that whole life cycle. We know that muscles are linked to eels as a host species, so bring back the eels means more muscles in the future too." Thompson said. “It's like the circle of life. It's really cool.”

It will take that circle the better part of about 10 years to complete, but the physicality of this waterway is a quicker process.

State geologists say the original bed of the Patapsco will be restored and the river will run the way it did before the dam in about a year or two, setting the stage for the comeback.

“We are gonna see fish move from point A to point B. We may also see small increases in numbers, but to see that really big recovery...ya know we are gonna give it time,” McClain said, “And the good news is, ya know what, we're here, we've got it right.”

Time is an affordable luxury, now that one of the largest hurdles to river restoration on the East Coast gone.

The Bloede Dam removal cost about $18 million of federal and state money.

There is one more dam left on the Patapsco that river restoration experts would like to see removed – the Daniels Dam further up river.

While smaller, it has a historical and recreational importance to it and may be harder to convince the state to remove.