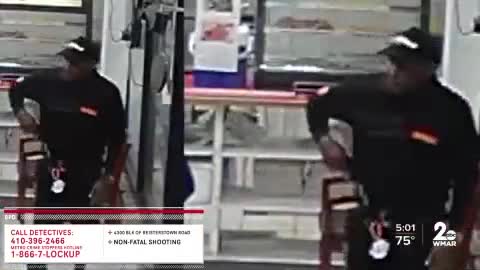 BALTIMORE — The man pictured in the surveillance video entered the Pizza Man convenience store with a woman at his side last Thursday night as customers, and in a matter of seconds, they left as suspects.

Help detectives identify this October 8th shooter and the woman who was with him. This shooting occurred inside the Pizza Man Restaurant located in the 4300 block of Reisterstown Road. Call BPD Detectives at 410-396-2466, to remain anonymous, call the MCS at 1-866- 7-LOCKUP. pic.twitter.com/rMtDVRRvAJ

“He was shooting everybody like here, here and there,” said Mya Bell, a cashier at the store, who says when other customers came in, the man opened fire with no warning. “I just bent down. That’s what I did and then they left and I called the police. I’m the one that called the police.”

Baltimore Police Detective Donny Moses says even with high-grade surveillance video, what prompted the triple shooting remains a mystery for now since it doesn’t appear the shooter and his victims ever exchanged words.

A cold, callous and calculated act… shooting three separate victims in their legs…for no apparent reason.

“Based on what we saw, we have every reason to believe this is random,” said Moses. “Again, there was no exchange of words. There weren’t even terrible looks. We’ve got no idea… or we have no impression that the suspect knew the victims. They didn’t even speak.”

If you recognize the man in the surveillance video or have any information, which could help police, you’re asked to call detectives at 410-396-2012 or you can call Metro Crime Stoppers at 1-866-7-LOCKUP.