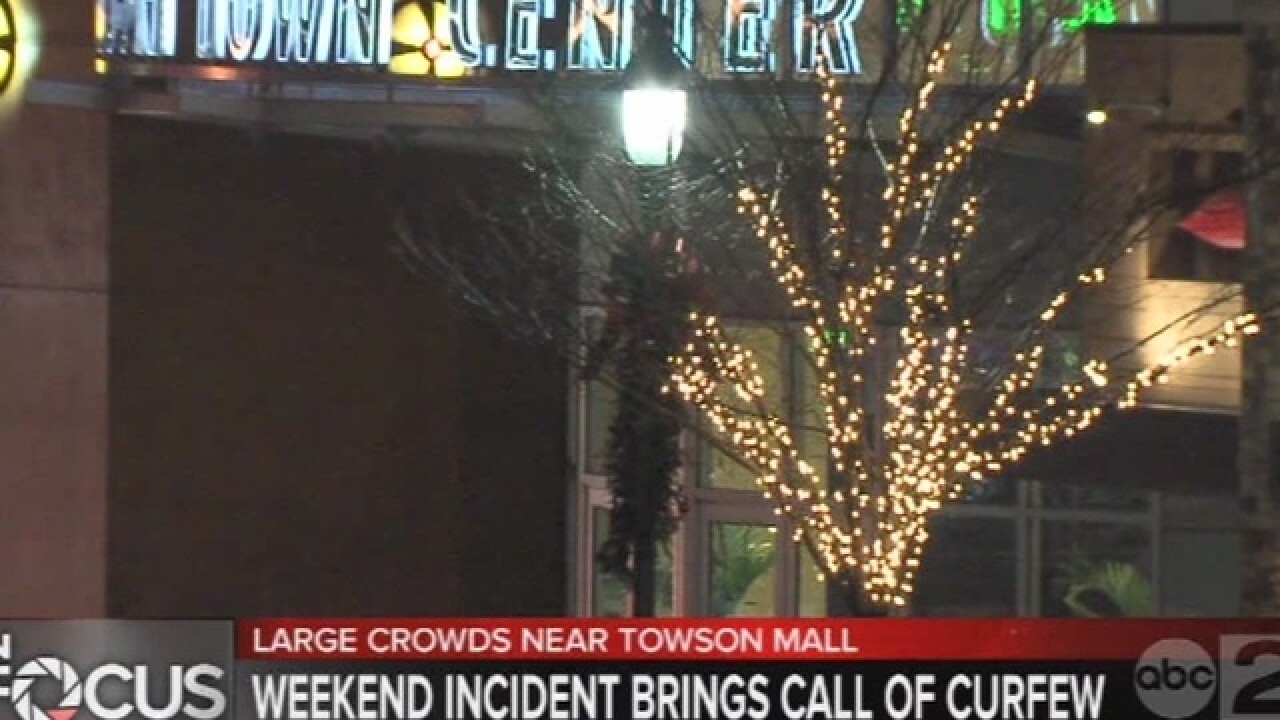 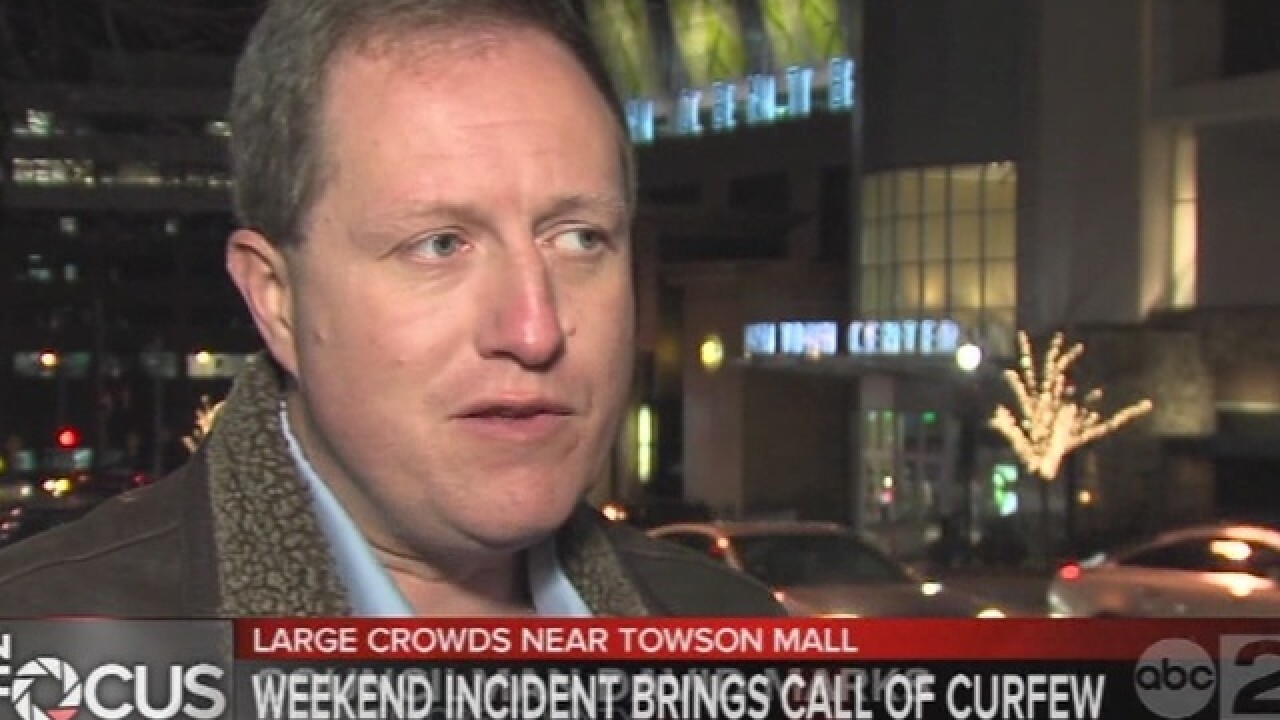 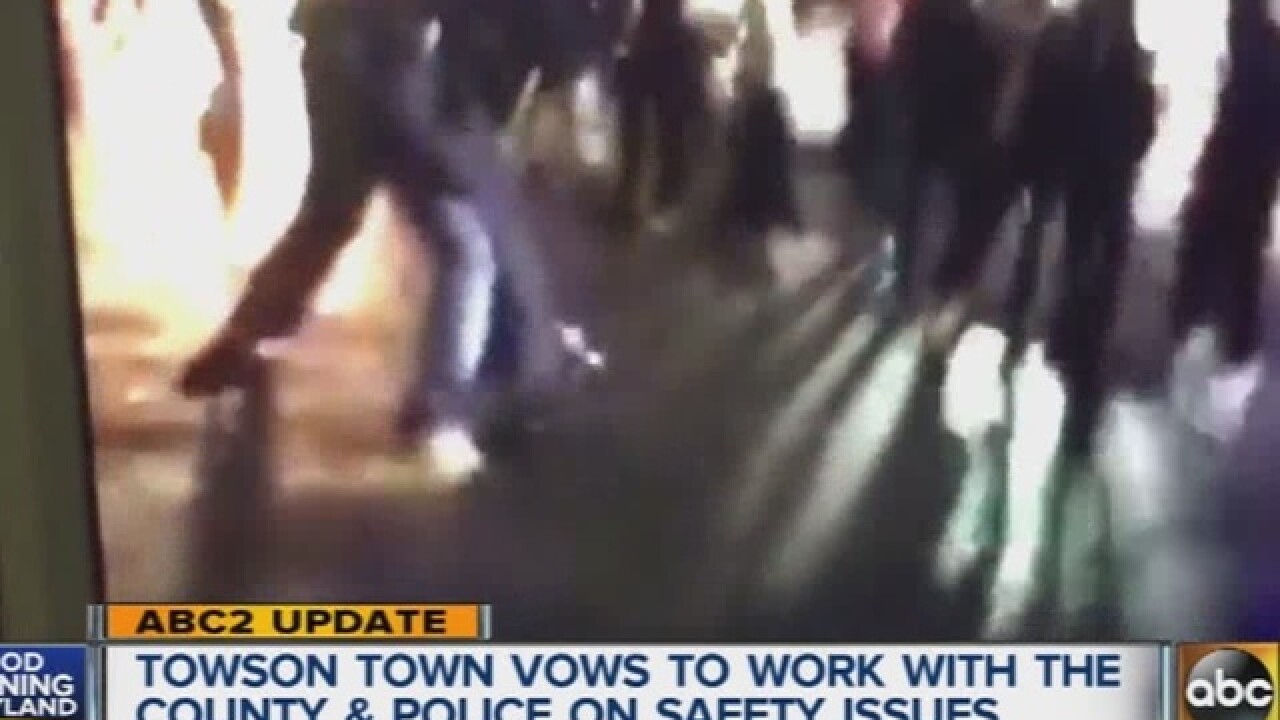 By: Dakarai Turner
Posted at 6:41 PM, Dec 29, 2015
Reaction to a video that captures the arrest of a teenaged girl outside a mall in Towson Saturday has elicited responses from two county officials, and Tuesday, management of the mall also weighed in.
Video obtained by ABC2 shows the arrest of a teenaged girl outside the Towson Town Center Saturday, ultimately leading to bottles and rocks being thrown at police.
County Executive Kevin Kamenetz also issued a statement. It said in part, "In several meetings with the ownership, General Growth Properties, I have suggested that youth curfew and dress policies have worked well at Hunt Valley and White Marsh, and I once again urge them to adopt a more stringent policy."
Related: Is it time for a curfew at the Towson Town Center?
In a statement, General Growth Properties, who own the mall, acknowledged the incident didn't happen on mall property, but said "the (Towson Town Center) has a code of conduct that we strictly enforce at all times. We do not discuss our security procedures publicly because to do so would jeopardize their effectiveness. Towson Town Center will continue to work with our partners at the police department and Baltimore County to resolve any ongoing safety issues."
They did not address a curfew or dress code.
The incident was reported as a crowd of at least 100 youth throwing rocks and bottles at police. It happened on Dulaney Valley Rd. in front of the mall.
Video shows a Baltimore County officer taking a teenaged girl to the ground before she is arrested. That led to the bottles and rocks being thrown.
The juvenile has been charged with disorderly conduct and assaulting an officer.
Download the ABC2 News app for the iPhone, Kindle and Android.
The video is the second incident in the county this month in which use of force in an attempt to make an arrest is captured on video.
In the first, an officer has been placed on administrative duty amid an investigation.
County officials did not immediately respond to questions about force used in Saturday's event.
Scripps Only Content 2015