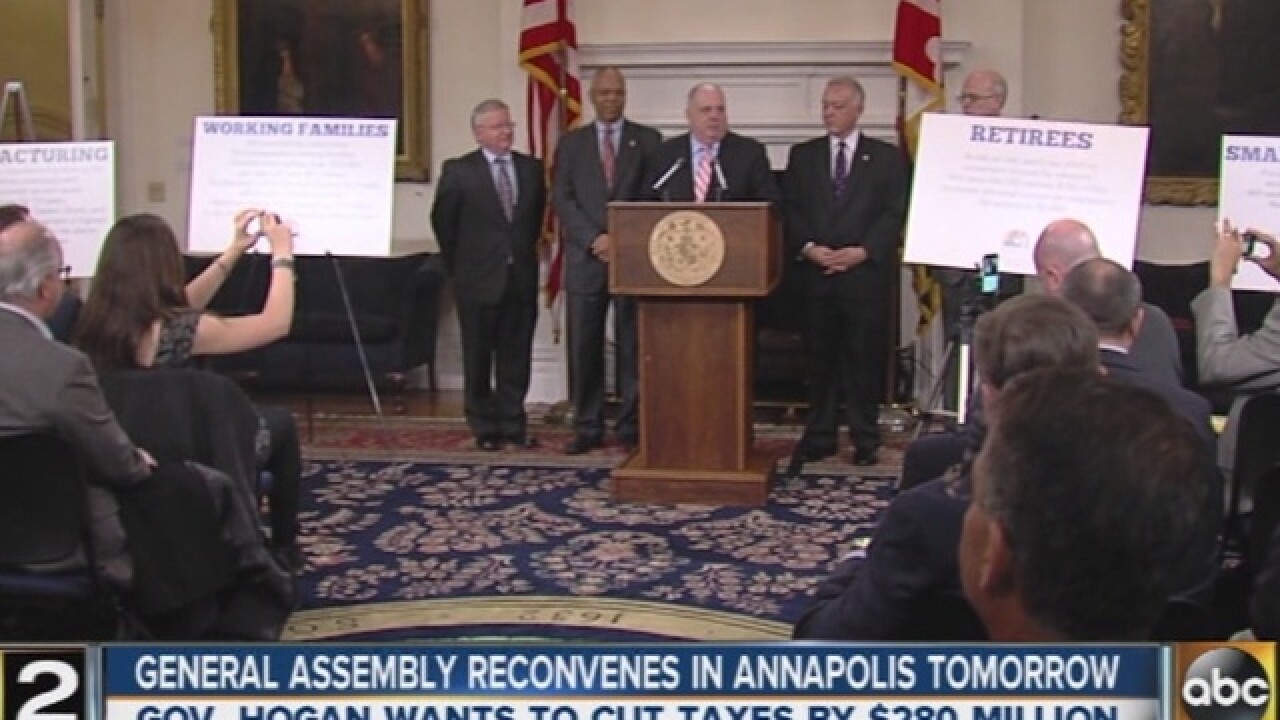 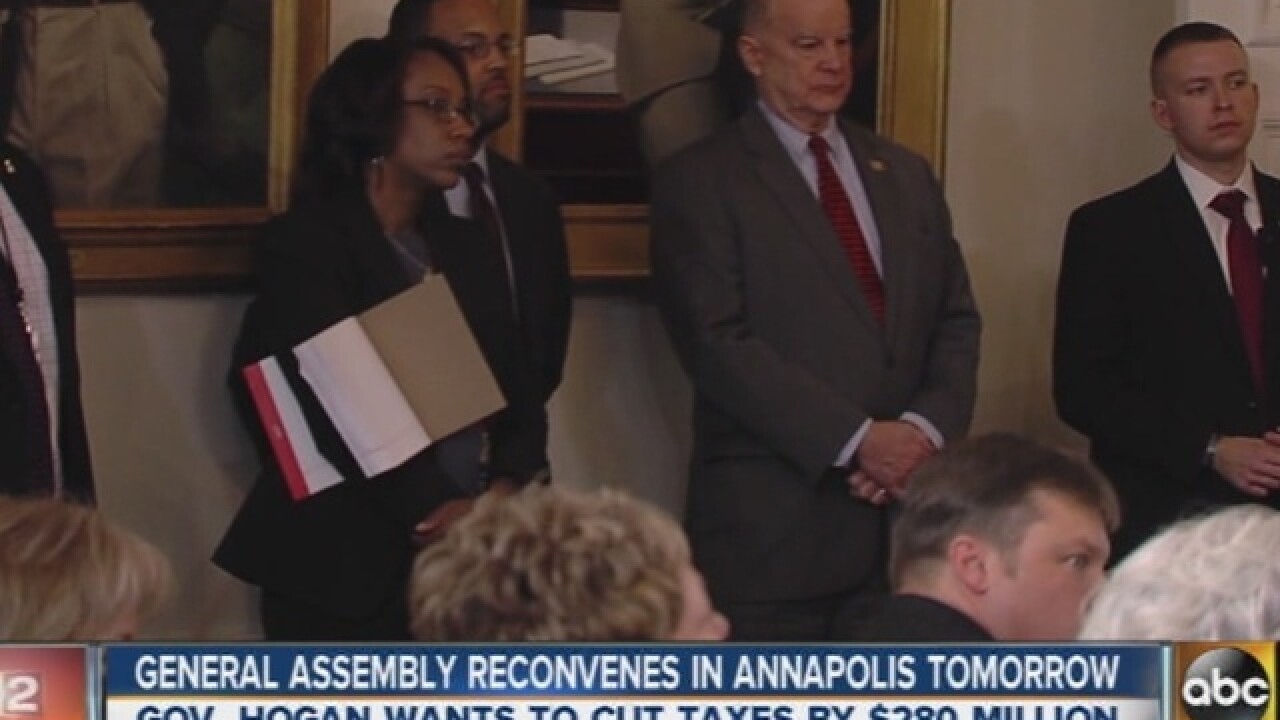 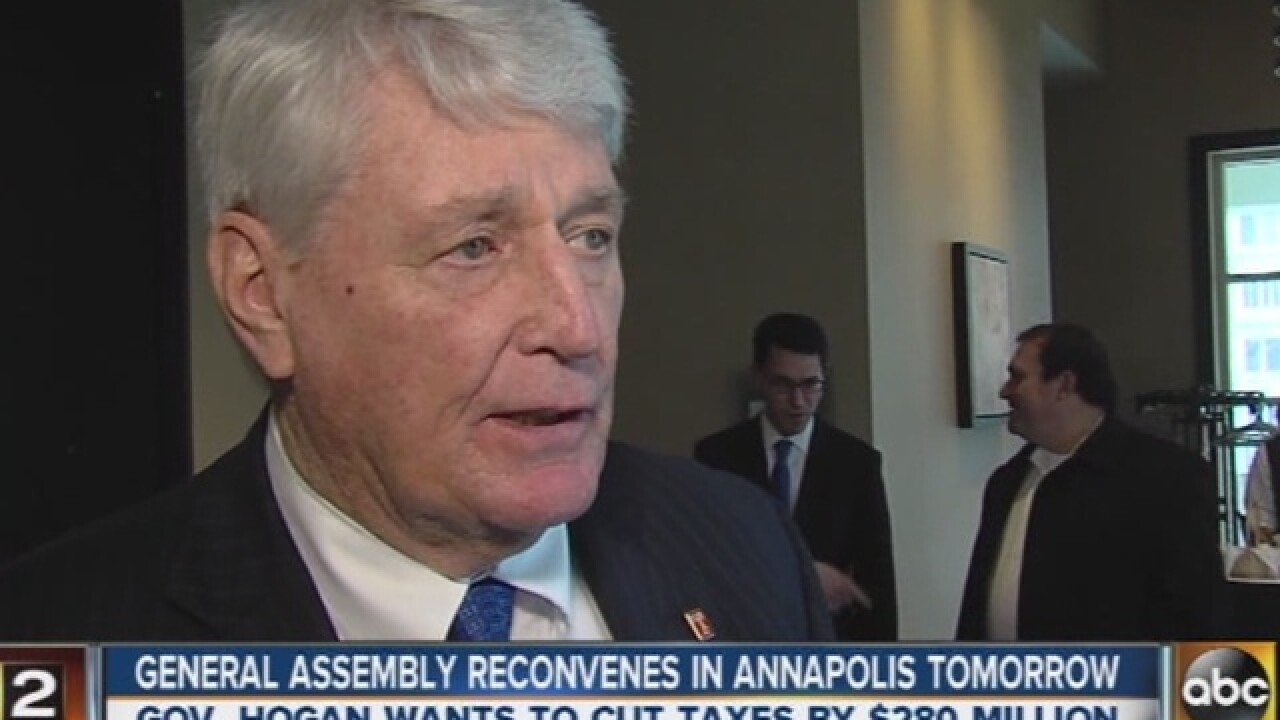 By: Dakarai Turner
Posted at 6:04 PM, Jan 12, 2016
Republican Gov. Larry Hogan wants the legislature to pass what he's outlined as close to half a billion dollars in tax cuts.
The plan must pass a legislature led by Democrats who have already staked claim to important issues they want to address.
The legislative session, which begins Wednesday, will focus on issues of policing and prisons, paid sick leave for state employees, as well as overrides of certain gubernatorial vetoes from last session. Add a new tax plan into the fray, and the upcoming session is slated to be a busy one.
Gov. Hogan touted a list of first year accomplishments as he announced his plan to cut taxes by $480 million over five years.
Hogan said the plan "will deliver additional tax relief to the most vulnerable Marylanders who need it the most."
The tax plan targets retirees, families, small businesses and manufacturing. Families making less than $53,000 each year would see their taxes slashed through increases in the Earned Income Tax Credit.
The package also includes tax relief extensions to all retirees, and a plan to eliminate corporate and state taxes to lure manufacturing to areas of high unemployment, including Baltimore City.
"Simply stated, if you're a manufacturer and want to come to Maryland and create jobs where we need them most, we will waive all state taxes for a decade," Hogan said.
Hogan's tax package faces an uphill battle in the Democrat-controlled legislature. The stage is already set this year for a battle over laws that mandate funding for certain spending, with Hogan saying he wants to see them changed.
At the yearly Democratic legislative luncheon, House Speaker Michael Busch promised a renewed fight for education funding.
"I look forward to give and take," Busch said. "Hopefully [Hogan] will share his views, and we'll have our input. The governor wants to reduce mandates that all revolve around education and I don't think that's going to happen."
Del. Maggie McIntosh, chair of the House of Delegates Appropriations Committee, didn't think Hogan would get very far in his attempt to change the spending mandates.
"It means reducing funding for healthcare, elder care ...  reducing those those programs and services I think the majority of Marylanders enjoy," McIntosh said.
For his part, Hogan said he too will focus on education spending, but reiterated his belief that his tax package aims to help Marylanders.
"An overwhelming majority of Marylanders want this, they're demanding it, and anyone who doesn't believe in that probably doesn't deserve to be in the legislature," Hogan said.
Hogan did not elaborate on how he plans to pay for the tax cuts. He said that will come when he introduces his $17 billion budget, which is due later this month.