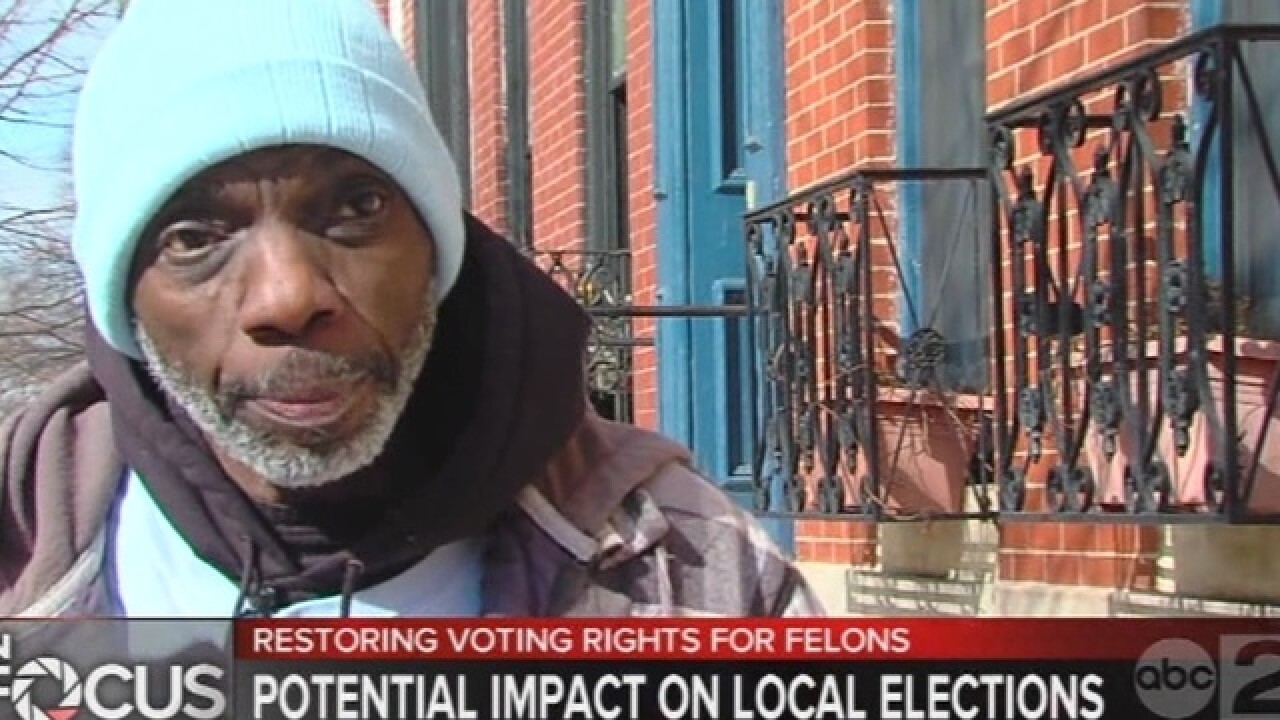 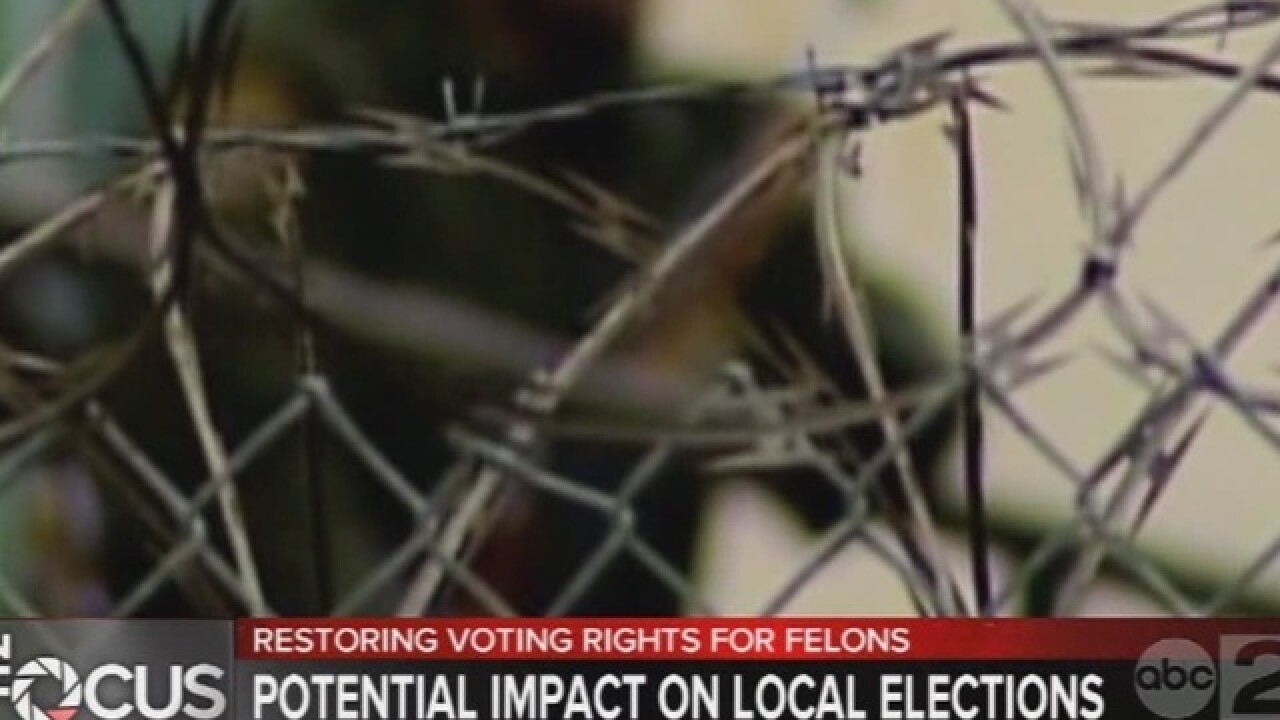 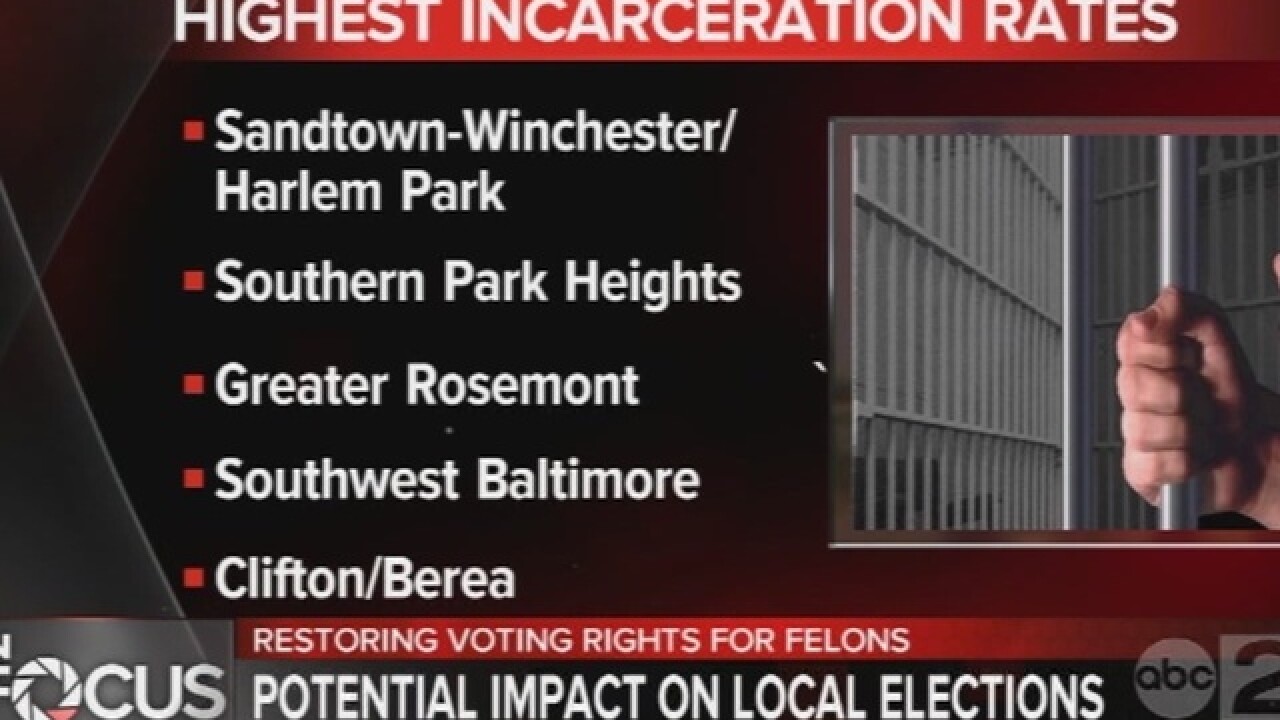 By: Dakarai Turner
Posted at 6:40 PM, Feb 16, 2016
Some 40,000 felons on parole and probation got the right to vote after the general assembly overrode a veto this month. Gov. Hogan vetoed the bill last year, saying felons hadn't yet completed their sentences before seeking the ability to vote.
With the primary election just two months away, what does that mean for candidates?
Key races for the primary include congressional seats, the race for numerous seats on Baltimore City Council, but the potential for what could be as high as 20,000 added to the rolls in Baltimore could just be enough to effect the race for mayor.
The right to vote for convicted felons on parole and probation gives Reginald Smith  muscle he says hasn't been flexed in more than a decade.  On parole until 2019, he says his newly reacquired right to vote was earned paying his debt to society while behind bars for 14 years.
Smith was arrested for attempted-murder.
"It's my tax dollars, but you're going to tell me I can't vote?" he said. "Everybody don't stay the same, people change."
Estimates by advocacy groups are that 20,000 felons are on parole and probation in Baltimore City, and thus, will gain the right to vote in the primary on April 26. In Baltimore, a deeply Democratic city, the primary election has traditionally decided the city's mayor.
Could an influx of up to 20,000 voters sweep a single candidate into office? Towson University professor Donn Worgs says the potential is high.
"If you got all those folks registered, and they all were ready to come out to vote, then it could make a difference," said Worgs, who has studied Baltimore politics for years.
Advocacy group Communities United will direct a registration drive aimed at getting felon voters to the polls once the law becomes effective March 10, the groups executive director said.
According to the Justice Policy Institute and the Prison Policy, city incarceration rates are highest in five city neighborhoods" Sandtown-Winchester/Harlem Park, Southern Park Heights, Greater Rosemont, Southwest Baltimore and Clifton/Berea.
In those neighborhoods, if, and how, candidates tailor their platforms toward that voting block could be huge for the election's outcome.
"If I'm an ex-offender ... I care about all the things most people care about, but I may be looking to a candidate who speaks to the needs of a certain community or certain neighborhood," Worgs said.
Among variables Worgs says he cannot account for is just how many felon voters may actually turn out to vote. That, he said, also depends on whether a candidate's message gives them reason to do so.
So just what is important to this potentially decisive voter block?
Smith points to employment.
"If we can get somebody in office that could give us a slight, minute chance of being more productive in society, that helps with our rehabilitation," Smith said.
Download the ABC2 News app for the iPhone, Kindle and Android.
Scripps Only Content 2015