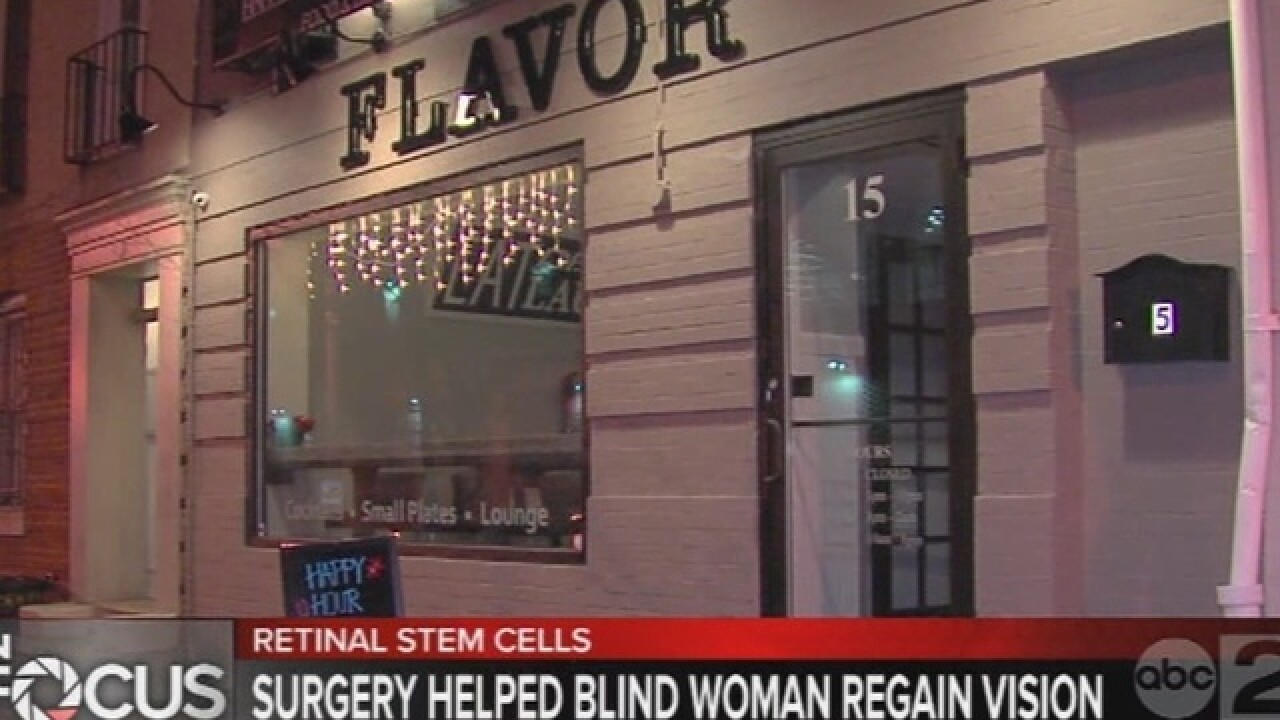 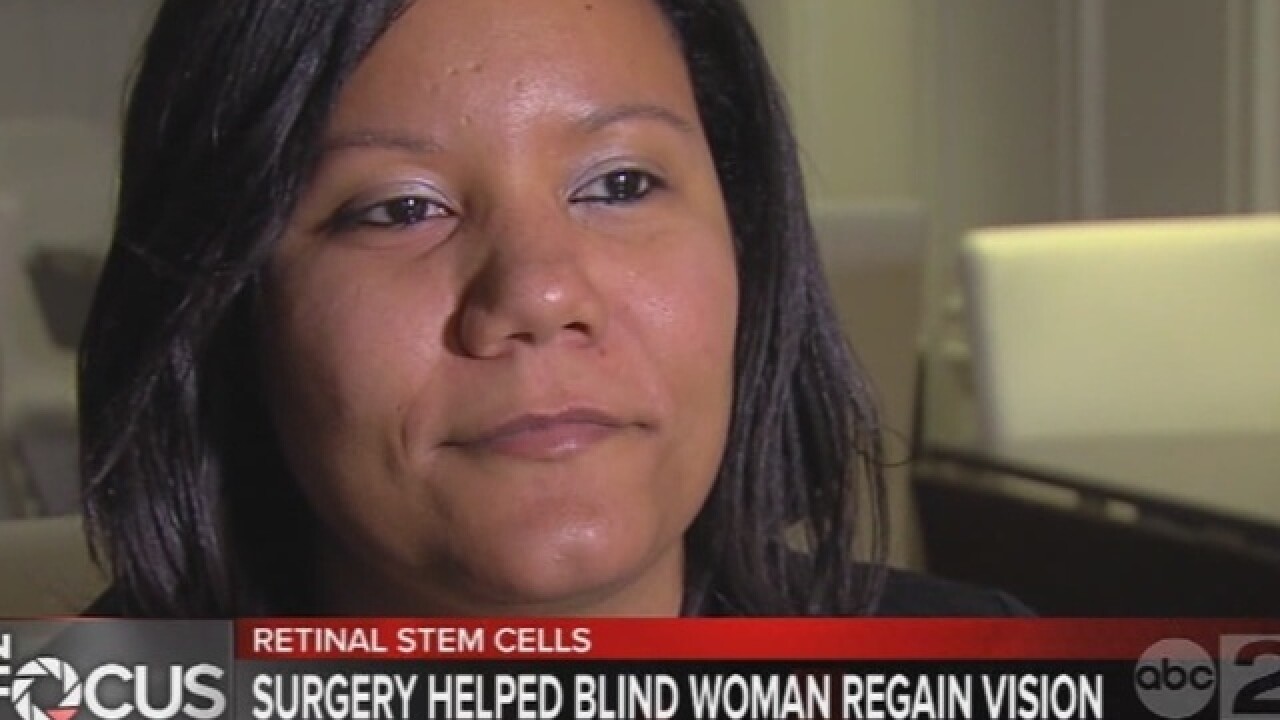 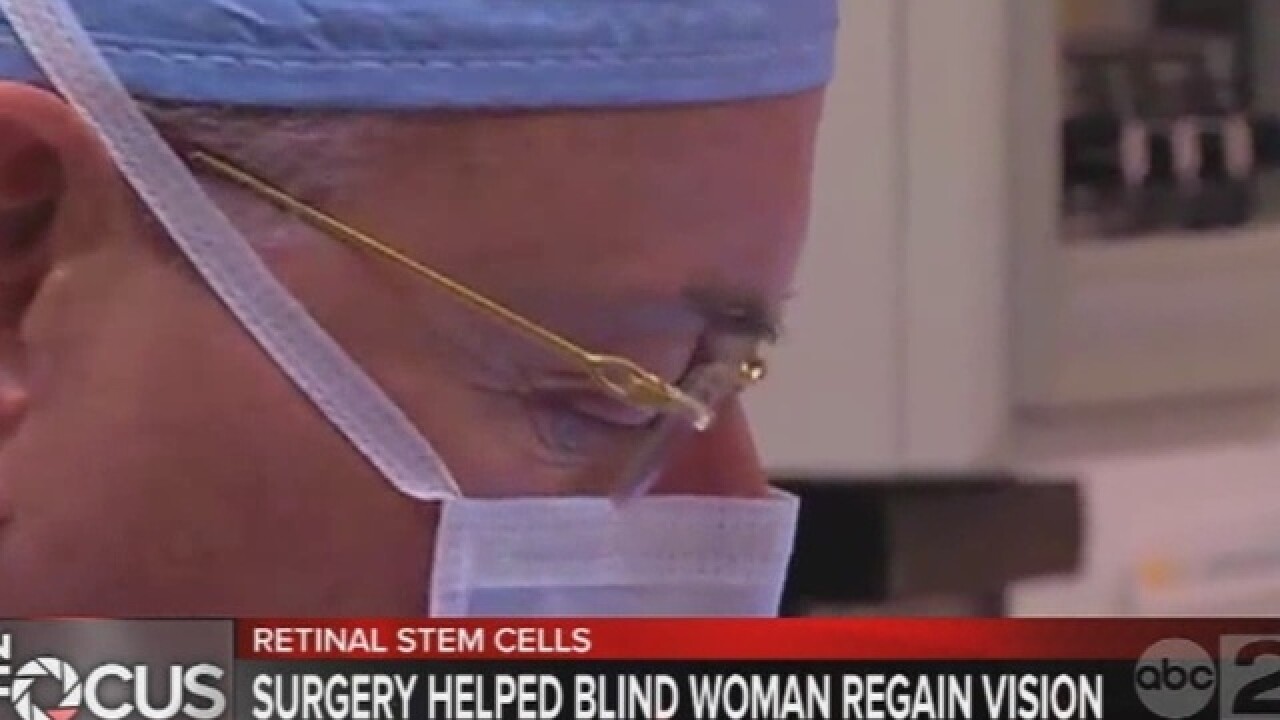 By: Trang Do
Posted at 6:32 PM, Feb 12, 2016
A Baltimore woman, once legally blind, can see again. It's all thanks to an experimental procedure performed by just one doctor in the world.
On any given day, you'll find Vanna Belton chatting with customers at Flavor, her newly opened restaurant in Mount Vernon. It was a long-held dream for Belton and her chef-wife Julia.
"It's been fantastic for us," Vanna said. "I'm able to actually contribute. I designed the space, I can see the space. I come to work every day and work with the staff."
Two years ago, she couldn't have seen the place---much less design it.
"I had perfect eyesight until June 2009 actually," she said. "I had better than 20/20. I was 20/15 in both eyes. Until I started seeing blurry one day and I thought I had an eye infection, so I went to the doctor and within 24 hours, I was checked into the hospital on IV steroids and they told me I was going blind."
Download the ABC2 News app for the iPhone, Kindle and Android.
Countless doctors and specialists couldn't figure out what triggered Vanna's vision loss, and they also couldn't help her get it back.
"Legally blind is classified as 20 over 200 and I was 20 over 3000 in both eyes," she said.
Then, came hope. A Baltimore neurologist sent her a link to clinicaltrials.gov, with information on a retinal stem cell surgery study being conducted by ophthalmologist Dr. Jeffrey Weiss.
"It's solving problems and helping people that is my motivation," said Dr. Weiss of Retina Associates of South Florida.
Weiss, a former electrical engineer, developed the surgery and the tools to make it possible. He came up with it specifically for people who've been told they have no options.
"Patients with untreatable, severe, optic-nerve or retinal conditions that have led to legal blindness or worse," he said.
The procedure goes likes this: first, an orthopedic surgeon extracts bone marrow from the patient. Using a special machine, the marrow is spun down to stem cells. Those cells are then injected into the problem area, in Vanna's case, her optic nerve. Dr. Weiss estimates 60 percent of his patients gain vision.
"This has been the most rewarding part of my entire career in retina, which I've been practicing since the early 80's, because I am treating people who are untreatable," Weiss said. "I'm treating only conditions that have no treatment. Patients who have no hope."
Vanna flew to Florida for her first surgery in March of 2014. Over the next year, she noticed her vision gradually improving. In July that year, she saw what her wife looked like for the very first time.
"We met when I was blind and a week before we got married, I saw what her eyes looked like for the first time," Vanna said. "That was probably the biggest wedding gift ever. The surgery changed my life."
Vanna is now one of the surgery's biggest advocates, though it's still in clinical trials and considered experimental.
"I have to ask for help a lot less and that makes you feel a lot more independent," she said. "I know that there are a lot of people I feel could benefit from this procedure and I truly hope that it gets notoriety because there's no way to describe what it feels like to have your life back."
The surgery has three arms and Belton is getting ready for her second one coming up in March. At around 20,000 a piece, it's not cheap, but Belton feels it's priceless to have her vision back. Her ultimate goal is to drive again.
Dr. Weiss has operated on around 275 patients for this surgical procedure, doing about 16 to 18 surgeries a month. The surgery takes about 2.5 hours from start to finish, and it takes about a month for your eyes to heal.
Scripps Only Content 2015