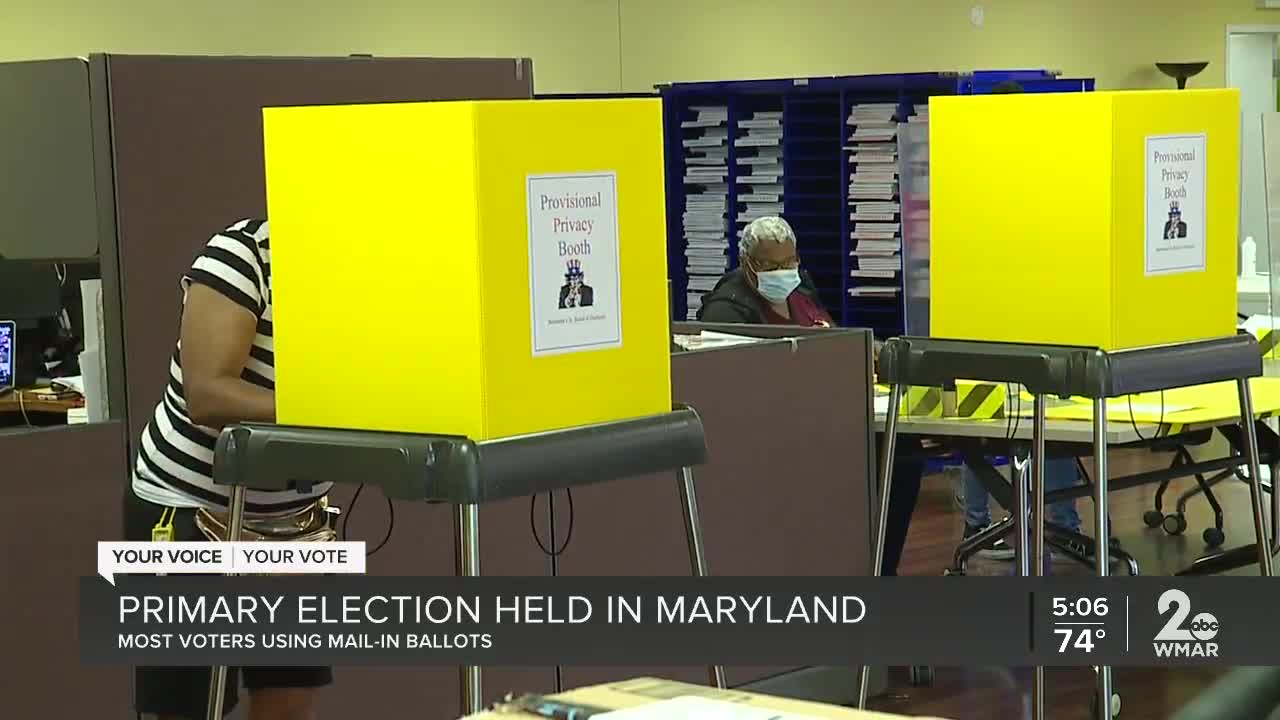 Today is June 2, which means it's primary election day in Maryland. All registered voters should have gotten a ballot in the mail. but If not a limited number of in-person polling and drop-off locations are open in each jurisdiction, with health and safety protocols in place.

ANNAPOLIS, Md. — Tuesday is Maryland's Presidential Primary election and because of the pandemic, things ran differently.

To reduce the spread of COVID-19, the Maryland State Board of Elections encouraged voters to mail in their ballots for the presidential primary election.
But that wasn't always possible; some voters reporting they never received a ballot in the mail. So today there are a limited number of in-person polling places open in each jurisdiction, with health and safety protocols in place. In-person voters have to wear masks and there are markers on the ground to manage social distancing in lines.

Polling places and drop boxes close at 8 p.m. and depending on in-person voter turnout, the winners may not be clear until mail-in ballots are counted, which could take a few days because they have to be quarantined first.

BOE reports more than 10,000 in-person votes cast since 7:00AM. All voting locations opened on-time this morning and without incident.

BOE was made aware of some instances where a vote-by-mail ballot was deemed “undeliverable” by the United States Post Office, but categorized as “voted and returned” in the electronic pollbooks. In those cases, the voter will be allowed to vote by provisional ballot and the ballot will count. The Board is working to find out how many ballots were labeled "undeliverable"

Due to voter turnout, some vote centers may remain open beyond 8PM to allow those voters who are in line by 8PM to cast their ballot. Due to COVID-19 social distancing requirements, only limited numbers of voters are allowed in the vote center at the same time.

As a result, the State Board of Elections will only release results of those local elections in counties where all the vote centers have closed. These results will include mail-in-ballots counted through last night.

During the ballot printing process, the State Board of Elections discovered a small proofing error in the ballot title for the Democratic contest for Baltimore City Council District 1 (Ballot Styles 1 and 19). The Board requested that the error be corrected with their printing vendor, SeaChange. While the error was corrected in the official voting database, the error was not corrected on a portion of the ballots that were mailed to voters in District 1. Due to this inconsistency, vote by mail ballot styles for District 1 could not be counted properly. The State Board of Elections is working to assess if vote by mail ballots outside of District 1 were impacted, but is not aware of any other inconsistencies at this time. It appears that the impacted contests are Council District 1 and judge of the Circuit Court.

The Board is committed to an accurate count of every eligible ballot in Baltimore City, including those impacted by the failure to print and mail the corrected ballot. The Board will work with the Baltimore City Board of Elections to duplicate affected vote by mail ballots onto correct ballots for scanning. The post-election ballot tabulation audit conducted after every election will be carefully reviewed to confirm the accuracy of the election results.