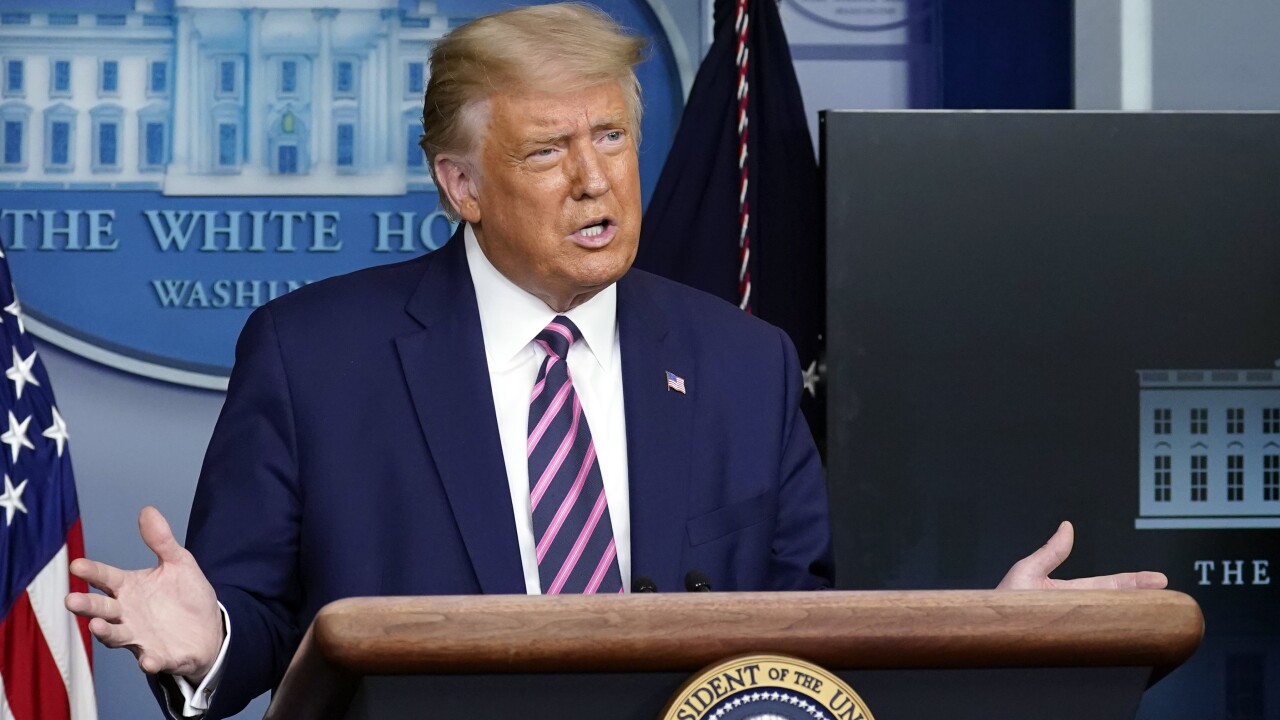 President Donald Trump was asked on Wednesday if he would commit to leaving office peacefully in January if he loses to Joe Biden in November.

“We're going to have to see what happens, you know I have been complaining very strongly about the ballots. And the ballots are a disaster,” Trump said.

When pressed to elaborate, Trump added, "We want to get rid of the ballots, we'll have a very peaceful -- there won't be a transfer, frankly, there will be a continuation."

Last week, Joe Biden said during a CNN town hall that he would accept the outcome once the full results are counted.

“I mean, he never think -- can anybody any of you or history majors out there think of any president who said early on, ‘I'm not sure I'm going to accept the results of the election. It depends,’” Biden said. “I mean what's happened to us in this case, it's not who we are. This is not what America is. No presidents ever said anything like that.

Trump has expressed doubt in mail-in voting during the 2020 election cycle, claiming that mail-in voting is prone to fraud. But many states, some of which are led by Republicans, are ramping up mail-in voting efforts. Proponents of mail-in voting say that it is a safer alternative than in-person voting given the coronavirus pandemic.

Meanwhile earlier this month, US Attorney General William Barr said that voting by mail is “playing with fire.”

“We're a very closely divided country here,” Barr told CNN’s Wolf Blitzer. “And if people have to have confidence in the results of the election and the legitimacy of the government and people trying to change the rules to this, to this methodology, which as a matter of logic is very open to fraud and coercion, is reckless and dangerous. And the people are playing with fire."

While there is scant evidence of widespread voting fraud in past elections, there are questions on the US Postal Service’s ability to return ballots in time to be tabulated.

In Florida, Volusia County Elections said more than 1,000 ballots that should have been counted for last month’s primary did not arrive on time. There were 1,281 ballots postmarked the day before Election Day, but election officials received them too late to be counted.

Yesterday, the FBI issued a warning that cybercriminals and foreign governments were working to sow distrust in the upcoming election process.

According to the FBI, “Foreign actors and cybercriminals could create new websites, change existing websites, and create or share corresponding social media content to spread false information in an attempt to discredit the electoral process and undermine confidence in U.S. democratic institutions.”

Beyond attempts to influence the vote, the FBI says these actors are attempting to sow distrust in the electoral system. The FBI in particular warns that cybercriminals could take advantage of the likelihood several states will need additional time to count ballots due to increased mail-in voting and social distancing protocols. While a delay in results does not indicate any wrongdoing, the FBI warns that foreign actors could attempt to spread misinformation to cause distrust in the system while votes are being tallied.