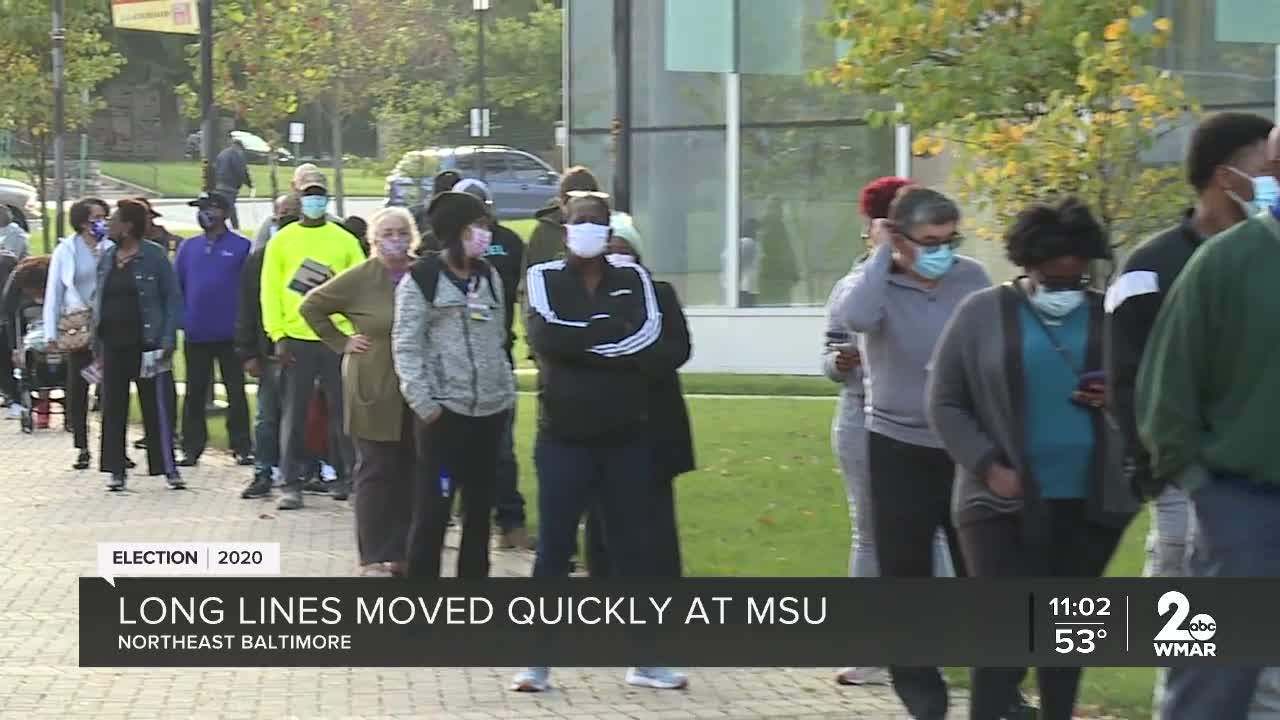 BALTIMORE — The story at Morgan State on the first day of early voting was a consistently long but quick moving line.

“We need to come out and vote, even if we have to crawl off our feet,” said Paulette Calender. “We have to do the right thing that has to be done.”

Nobody crawling to the polls that we saw but the importance of people getting their voices heard was on display.

“The issues that we are facing right now I thought it was very crucial,” said Martina Evans. “I’ve always voted ever since I was 18. I thought especially our voices needed to be heard. Everything that’s going on in the country, everything that’s at stake and because of the candidates who are running both locally and nationally.”

For David Armstead early voting was his first choice after all the problems he saw during the primary.

“I don’t like long lines, and November third stuff could go wrong,” said Armstead. “I don’t want to wait until the last minute and I don’t trust mail in ballots.”

Jada Grant is a junior at Morgan State who is part of several organizations including “Black Girls Vote”.

“Making sure that your vote doesn’t represent you just by yourself, it also represents your community,” Grant said. "I’m an African American woman. I vote for myself, the African American Community, the black girl community. I think about those things when I actually do cast my vote.”

Many people decided against the line and just dropped their ballots off.

“I have a lot of family members that end up with COVID so I was kind of skeptical about being in a long line with a lot of different people even though we have on masks and socially distancing,” said Gina Edwards.

The Morgan State location had the highest turn out of any of the voting locations in Baltimore City.

“I want me and my peers to be able to hold them responsible and hold their feet to the fire,” said Grant. “I’m not one for gimmicks let’s see the paper let’s see that you’re ready to plan and put it to action.”

Morgan State had around 1,800 people come out to vote on Monday, and around 10,000 people voted Monday in Baltimore City.

You can come out and cast your ballot every week day leading up the election anytime from 7 a.m. to 8 p.m.