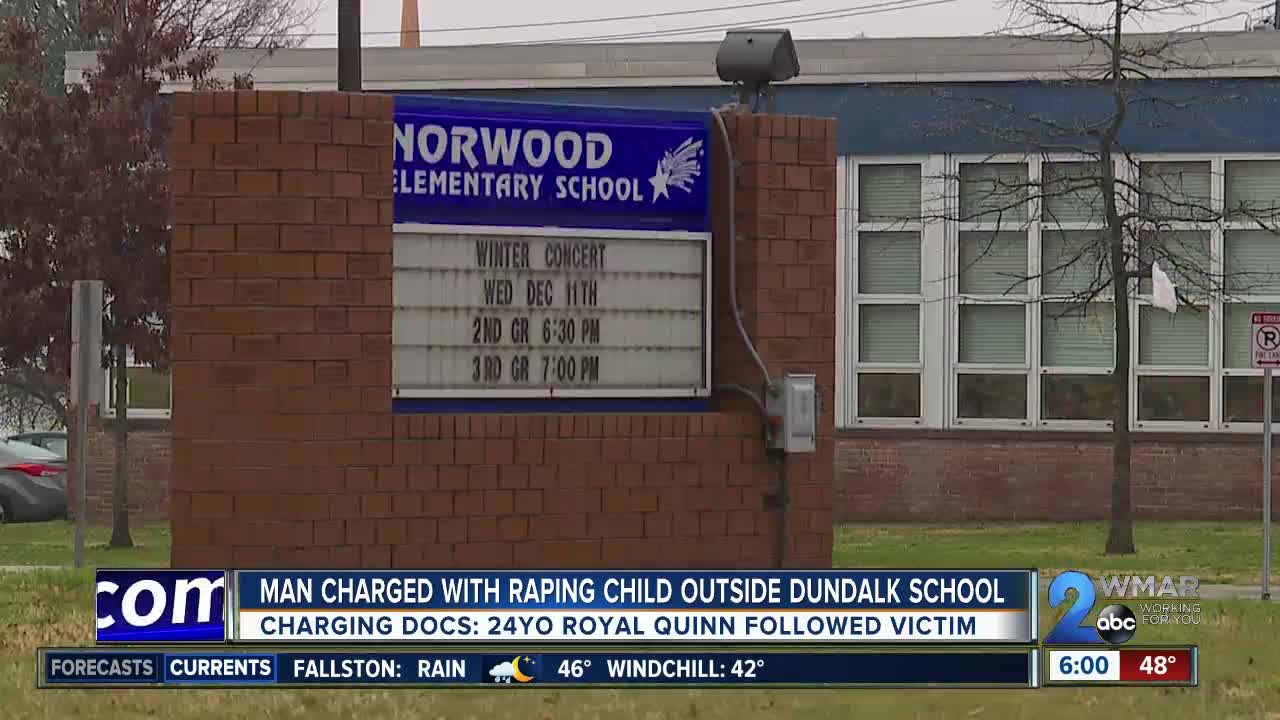 Baltimore County Police have arrested and charged a man for raping a child outside a Dundalk elementary school on December 2.

DUNDALK, Md. (WMAR) — Baltimore County Police have arrested and charged a convicted murderer they say sexually assaulted a child outside a Dundalk elementary school. To protect the child, we are withholding their age and gender. The victim is a Baltimore County student but does not attend the school it happened at.

The child reported the incident to school staff immediately after it happened on a footpath near Norwood Elementary School's baseball fields on December 2. Four days later, Baltimore County Police had a suspect under arrest.

According to charging documents, the victim was jumped from behind and pushed to the ground. The victim told detectives the suspect punched them multiple times in the face and covered their mouth during the assault to stop their screams.

Detectives wrote they believed the suspect would have abducted the child if the victim had not fought so hard to get away.

A school resource officer was able to view surveillance footage of the incident, which helped detectives identify 24-year-old Royal Jamar Robert Quinn, of the 3000 block of Wayne Avenue, as the suspect.

Detectives were also able to use lots of video surveillance from the neighborhood, which showed a black car following the victim for some time before the attack, and footage from at E-Z Pass toll lane to get a license plate number and track it back to Quinn's address.

As of now, police believe he did not know the suspect before the attack.

"This was a very concerning case," said Cpl. Shawn Vinson. "The most alarming part is that we have a random victim in this case. Knowing that, there was a grave concern and a sense of priority, as with any case, but a sense of priority in this case to hurry up and identify the suspect and get this perpetrator into custody as soon as possible."

According to online court records, in 2014, Quinn pleaded guilty to second degree murder in the stabbing death of a man in Baltimore City. Records say he was sentenced to four years plus supervised parole.

Now that he is under arrest, police are working with the Baltimore County State's Attorney's Office to move the case forward and help the victim.

"We want to protect the victim as much as possible and ensure that the victim has as many resources that are available so that this person will be able to deal with this for the rest of their life," said Vinson.