Violent 4 hours in Baltimore: One dead, 6 injured in 4 separate shootings 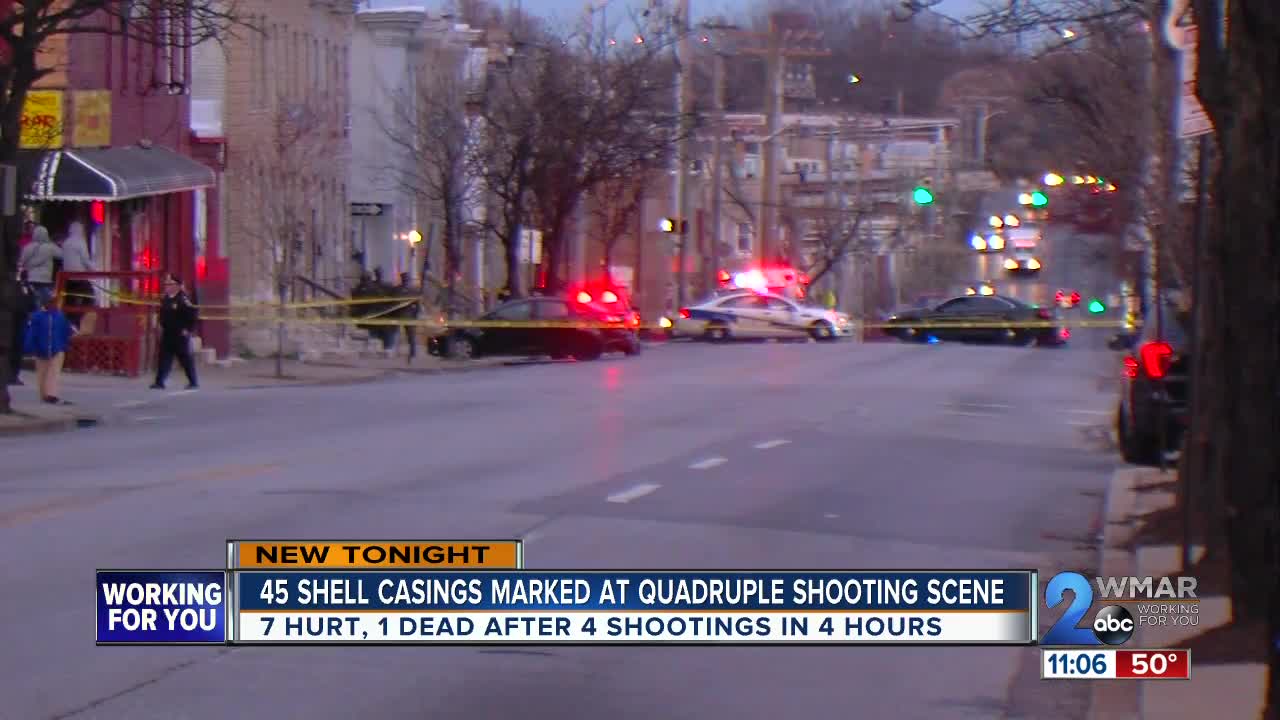 Baltimore Police are investigating four separate shooting that claimed the life of one person while leaving six others injured in the city. 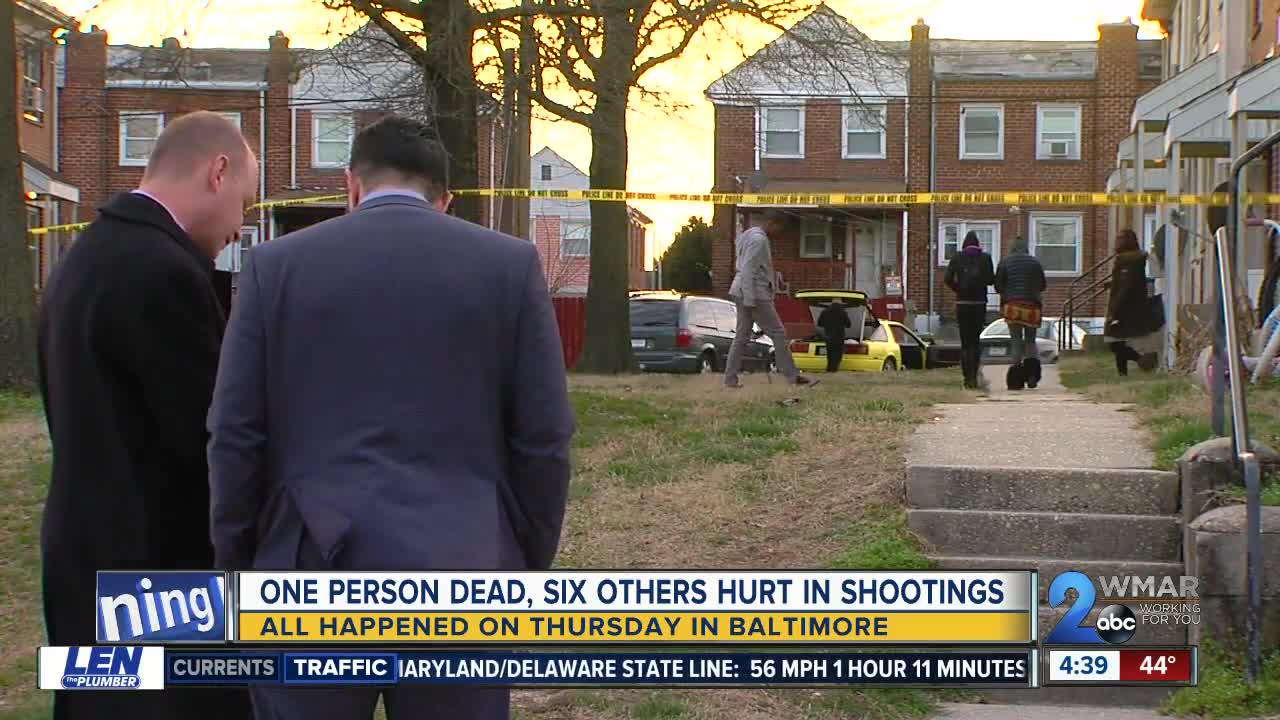 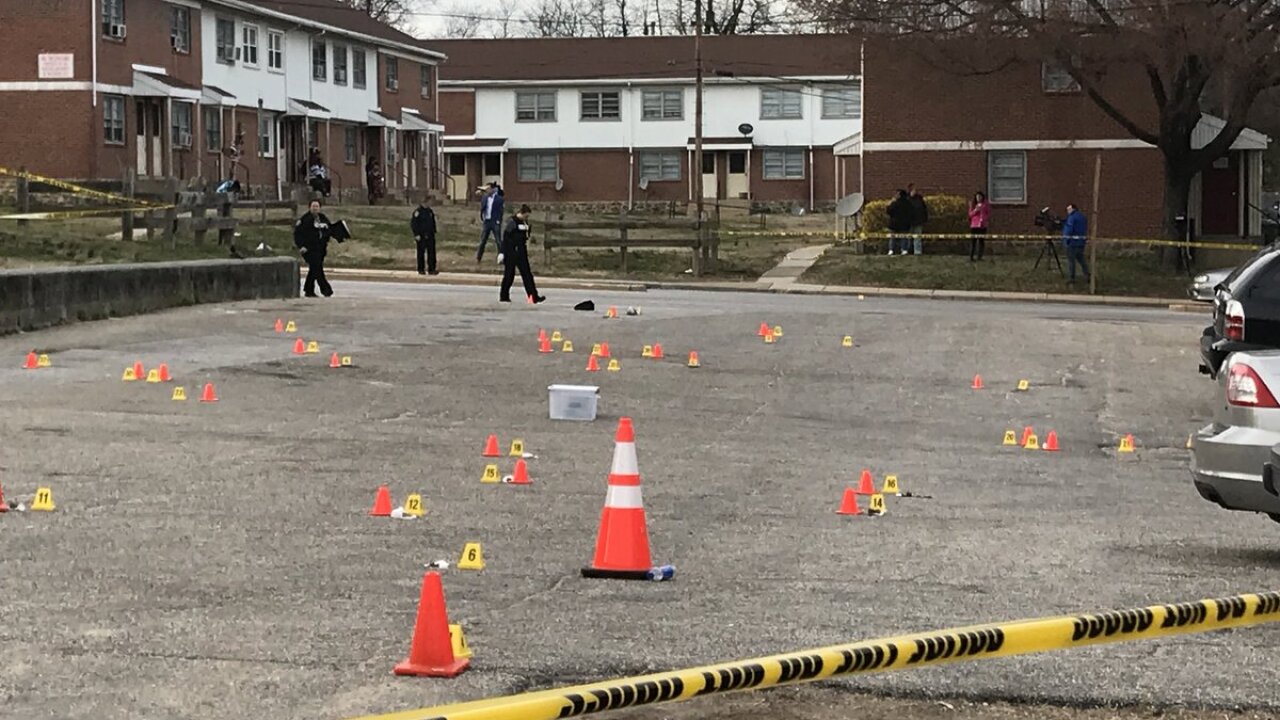 BALTIMORE, Md. — At least 45 shell casings lay on the ground of the parking lot next to a playground as police investigate a quadruple shooting off of Boston Street.

"For this to happen in broad daylight, around a playground where there are children is just completely unacceptable. People should not have to live with this level of violence," said First district Councilman Zeke Cohen.

Cohen visited with his constituents and friends. He says it is a community working to revitalize.

"I was actually just here the other night. We were able to get a $15,000 grant to be able to go some work to clean up some of the neighborhood, get some new lighting or put together potentially a new park," said Cohen.

Kids play on a playground in “No Shoot Zone #90”... just on the other side of caution tape where 40 shell casing lay after 4 men were shot 2 hours ago. @WMAR2News pic.twitter.com/Demf9nAPXI

Then just across the Southeast district, officers were then called to a hospital for a reported walk-in shooting victim around 4:30 p.m. They found a 30-year-old man who was shot in the arm. The man told police he was shot in the 400 block of Port Street. The quick response team was also on scene, surrounding a home on Orleans Street.

Chaotic scene of another shooting... the Quick Response Team is surrounding a home on Orleans St. “Please back out, it’s a dangerous situation.” @BaltimorePolice are investigating after a man was shot in the arm off Port and Orleans @WMAR2News pic.twitter.com/m3BuvczOXm

In less than 4 hours Thursday, 7 men were shot and one was killed.

The violent day started with a homicide just before 2 p.m. on the 900 block of West Franklin Street in West Baltimore. When officers arrived at the scene they found a 39-year-old with gunshots to his body. The man was sent to a hospital where he later died.

On April 11, the victim was identified as 39-year-old Kenneth Maddox.

Just before 5:30 p.m., officers responded to a hospital for a report of a 25-year-old walk-in shooting victim. The man was found to be shot in the upper body.

Investigators say they believe the man was in the 2600 block of West Lafeyette Avenue in West Baltimore when he was shot.

The four shootings happened just a day after city and state partners announced 260 violent offenders have been arrested in the last month as part of a U.S. Marshal's operation. Baltimore Police Commissioner Michael Harrison said people should feel a little safer now that they are off the streets but people who live in the neighborhoods want to see more done to protect people and their communities.

"We gotta get these kids off the streets, do something, more jobs for these young kids," one neighbor said.