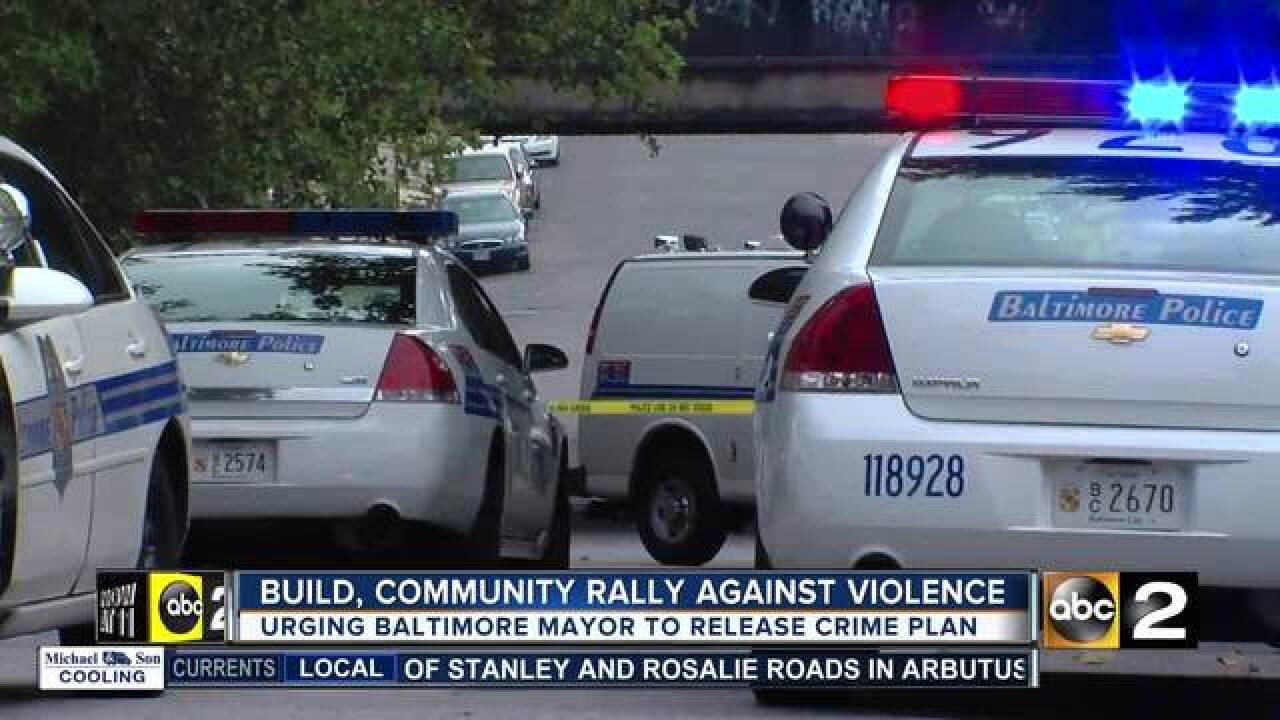 The BUILD Organization rallied with the community Wednesday. Those involved say they're ready for Mayor Catherine Pugh to step up and roll out her plan to reduce crime in the city.

The rally was held in Darley Park.  It's the same neighborhood where 97-year-old Waddell Tate was murdered in his home last month.  Volunteers and residents took to the streets as a call for justice for him and the hundreds who've died at the hand of violence.

"We can come together for one day but if we stay together i think change will come," said resident Joyce Johnson.

That's the hope as dozens of people, young and old crowded the Darley Park neighborhood to speak out about the city's skyrocketing death toll.

"There's a sense of urgency concerning some of the violence taking place in the city were looking for not only her leadership were also looking to unite together," Pastor Kevin Daniels, told ABC2.

Baltimore City Mayor Catherine Pugh has said there's no one way to stop crime and laid out talking points to combat it last week but those here say they want a comprehensive plan now.

"We're very desperate about the whole violence in the city problem, were asking the mayor to please establish one plan that we can all buy in on," Pat Shannon Jones of the Immigration Outreach Center said.

BUILD was behind the rally--and wants a seat at the table when that plan is finalized.

Residents say they're scared to let their kids play in the city's once safe streets.

"It's devastating and I'm here because I have children who actually live on the block where the man was murdered," Johnson said.

The man she's referring to is Tate; murdered in his own home.  Police have no leads yet on Tate's death and people are fed up with the rampant violence.

"206 people have died this year in Baltimore city and to me and to build we say that is too many people," said Baldwin.

The mayor's office issued this statement from Anthony McCarthy, the mayor's spokesperson, Wednesday:

"This is Mayor Pugh's top priority. She has called people to Action and the public has responded. It's easy to stand on the sidelines and point out what others aren't doing. People all over Baltimore aren't pointing fingers but instead want to be part of the solution in reducing violence. We invite BUILD to join that conversation."

Also in response to the rally, Councilman Brandon Scott released a gun violence strategy saying the record levels of violence in the city should be reason for immediate action.

This all comes on the heels of this weekend's cease fire put on by the Baltimore Ceasefire organization.
It runs August 4-6.