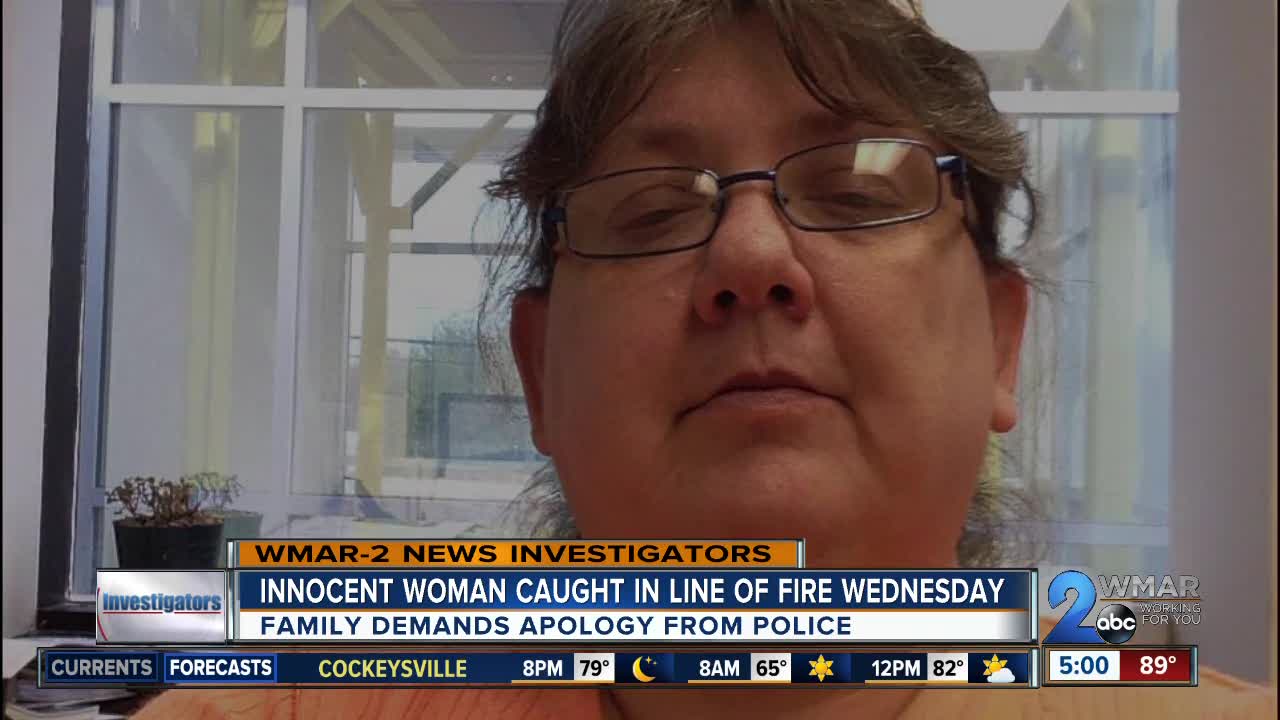 BALTIMORE — The family of a woman who was seriously injured during a police chase and shootout with a suspect in east Baltimore speaks out about the traumatic night.

51-year-old Ray Maier was on her way home from a work dinner when she was caught in that shootout between police and a suspect. As numerous shots were fired, bullets came flying towards Ray.

NEW: Ghilda Fries says her sister was shot twice, caught in that @BaltimorePolice shootout Wednesday night in east #Baltimore. She was simply at the stop light at Fayette and Caroline when she was injured. Her sister had 5 hours of surgery at Hopkins. @WMAR2News pic.twitter.com/I8HeP9V83p

Ghilda Fries says her sister was sitting in her white Ford Focus at the intersection of Fayette Street and Caroline Street when the whole ordeal went down.

"She felt pain and looked down and she saw blood. She looked up, couldn't go anywhere," Fries said. "There were empty police cars blocking her, people running along the side she said she did see some of the policemen get out of the car and run."

All Maier could do her sister said was to drift her car forward to get the attention of firefighters in a truck that happened to be at the light with her. Those firefighters immediately treated Maier on the scene.

Fries says doctors at Johns Hopkins Hospital say Maier suffered two gunshot wounds, one to her right hand and another to her chest as well as a wound to her neck.

Fries added her sister went through five hours of surgery, all while her family was feverishly trying to locate her, not knowing she was the bystander in the shootout.

The family knew nothing until they began calling hospitals the next morning.

"It made that long 12 hours of her missing so much worse in the end because she was in surgery and we didn't know if she was going to make it or what," Fries said. "We had no information."

Even though police considered her white Ford Focus part of the investigation, the only thing said about Maier's involvement came from Commissioner Harrison that night.

"We can say at the corner of Fayette and Caroline there was a female civilian who was at that corner that we believe was injured," said Commissioner Harrison "We do not know if it was by gun fire or shrap metal or broken glass but is being treated at the hospital and we believe also is in good condition right now."

But Fries said her sister was not good, having been shot twice and enduring hours of surgery.

Maier's family is demanding an apology or at the very least, an explanation.

"I would like them to acknowledge that they are downplaying how badly and poorly they handled this situation, how reckless it was," Fries said. "There was just no logical reason for all of these men to run and drive firing in such a manner."

At time of publication, Maier was listed in fair condition and her family is continuing to spend overnights with her in the hospital.

The Baltimore Police Department had no update on the shootout today and declined comment on this story until investigators fully reviewed the evidence in the incident.