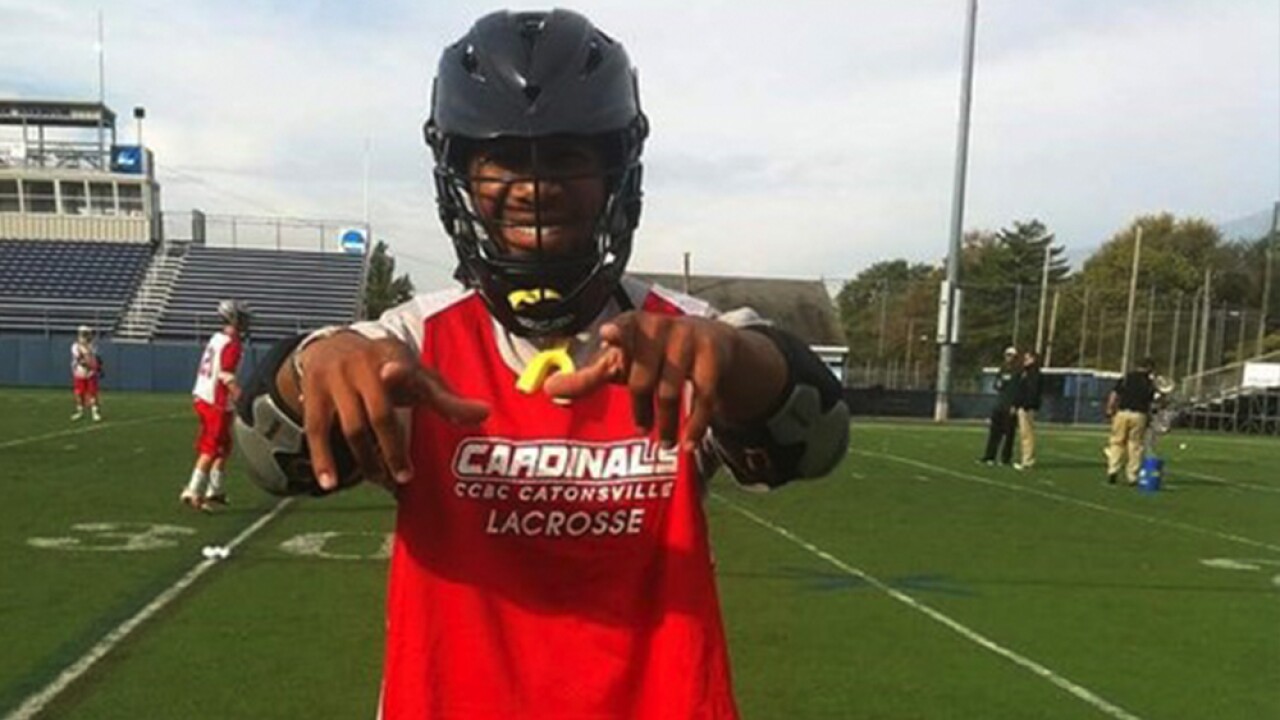 If you play lacrosse throughout the year in Baltimore, without a doubt you'll make a stop at the William J. Myers Pavilion -- an indoor, multipurpose space run by the city's recreation and parks department near the Brooklyn neighborhood.

Every so often, you'll run into Coach Anthony 'Merc' Ryan.

He's heavily engrained in Baltimore's lacrosse community, co-founding Blax Lax -- a non-profit lacrosse organization aimed at getting the city's kids on the field and playing lacrosse.

And every so often, you'll hear the story of one of his star pupils.

"And then, what happened is, he got up a little wobbly, came over to the sideline and he said, 'man that guy stuck me didn't he," Ryan recalled as he thought of the last time he saw one of his star players, Devin Cook. "That's when it broke everybody up. Everyone was a little loose. But that's the type of kid Devin was," he laughed.

By all accounts, Devin Cook was the best lacrosse goalie in the city.

He picked up the sport in middle school and it carried him through to the Community College of Baltimore County in Catonsville.

"After the game, kids said their goodbyes and then catch up to them the next time we had an event or something and that was it and I guess a couple of hours later, I heard the terrible news that happened," Ryan said.

20-year-old Devin Delante' Cook was, to use his mother Rhonda's words, 'on his way.'

He used lacrosse and school as a driving force to keep busy -- though his job as a bar back at the 'Stalking Horse' in Federal Hill and job at the Maryland Zoo took up most of his other spare time.

With his money, Devin scraped up enough to buy an old, beat up 1997 Nissan Altima.

It was his 'get around' car to wheel him and teammates to lacrosse matches around town all summer -- until late July 2014.

Devin was in the middle of dropping off his lacrosse buddies when he stopped his car on Wilern Avenue in Park Heights.

According to Rhonda, Devin went to his old neighborhood to help a friend who asked for his assistance.

But before that could happen, someone started shooting.

"It's something that, kind of, still has us scratching our heads a bit. This is not a kid that was involved in drugs, wasn't involved in gangs, wasn't a gun toter. He was a young man playing lacrosse, taking care of his younger brother, and a loving son of his mom," Chief T.J. Smith, head of Baltimore Police's media relations team, said.

He fell right in the middle of Wilern Avenue.

"Devin fell into the street right there. We got there, paramedics got there, and minutes later he was pronounced deceased," Smith said.

Devin's friend was also shot. He tried driving away from the scene, but couldn't get far.

Paramedics found him less than a mile away on Cold Spring Avenue.

He survived, but was only able to give police a limited description of the shooter.

"They hurt my son. They took my son away," Rhonda Cook said in a phone interview.

Rhonda got a call from Devin's girlfriend at the time hours after the shooting, early in the morning.

"She was like I think something is wrong. I started calling Devin's phone. I didn't get an answer and then she finally got in contact and that's when they gave me Detective Moore's number," Rhonda said.

A sinking feeling for the single mother and those closest to Devin, only made deeper by the years of not knowing who would want to anything to the 20-year-old who was going places.

For Coach 'Merc', it's a feeling of 'what if' and 'what could have been' as Devin's love the game often brought him to the pavilion as well, sharing his knowledge and skills with those who suited up.

"He was the kind of kid that knows how to give respect -- yes sir, no sir. He was very polite. He was mannerly all the time. He was just an outstanding kid: intelligent, funny. He was whatever you could ask for," he said.

A bright light, dimmed by the cruel nature of the streets.

A message from Rhonda about forgiving her son's killer:

'I stated that I forgive, because they will hurt for the rest of their life, knowing Devin greeted them with a firm handshake and looked them in their eyes. If he did that, he knew you as friend or as he would say my brother. They took the life of probably the only person that ever cared about them or that would ever have their back. They didn't win, because Devin's name and what Devin stood for will forever speak for Devin. Yes, my family and I will forever miss him, but we have great memories and the person that stole my son's life will live with Devin's blood on him forever."