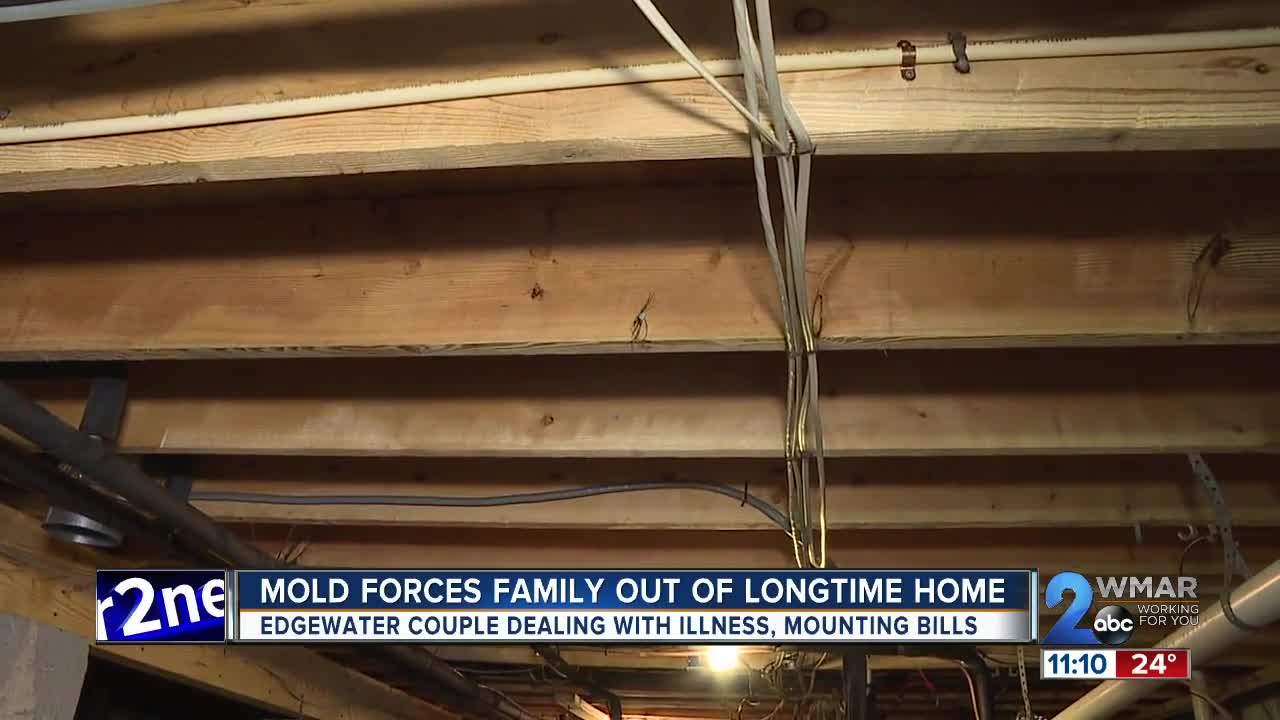 When Kaye got really sick, the Sylvester's knew something was up, but they had no idea that mold would force them out of their home and drown them in bills.

It was a life she and her husband Earnie built over 50 years. Two kids, four grandchildren, two Dachshunds and one dream home they built on the water 22 years ago.

“It’s 2,000 square feet. It’s not big. It’s not extraordinary,” said Kaye. “But the location is what was ideal and what was our dream.”

And that life changed drastically one year ago.

“To see my grandchildren is quite an ordeal. My daughter ordered clothes from Amazon to here. I wash the clothes. When the kids came over, we had to give them a bath. Then we put on the new clothes and then I could give them hugs,” said Kaye.

It’s the new normal for her after mold invaded their Edgewater home.

“Everything is contaminated,” said Kaye.

It started with a leak from a window. While it was getting fixed, Kaye got really sick, with joint pain and swelling. It got so bad she could barely walk.

“I felt my life was slipping between my fingers,” said Kaye.

“To see somebody go from a perfectly healthy person, to one not being able to walk, it's troubling,” said Earnie.

At the beginning of February, her primary care doctor diagnosed her with seronegative rheumatoid arthritis.

“She gave me medicine and told me to come back in 10 weeks but I was concerned that I would be crippled in 10 weeks because my condition was worsening that much,” said Kaye.

So she sought a second opinion from a functional doctor who tested her blood for environmental pollutants and found toxicity. Then the doctor determined Kaye is genetically predisposed to mold.

“I get very, very sick being exposed to mold. My body does not process molds and get rid of it out of the body like the ordinary person,” said Kaye.

They never saw it in their home. They had no idea they were breathing in the microscopic spores but an inspector discovered mold in more places than just the leak.

“The crawl space is where they went first and where they found most of the mold,” said Earnie. “They made a comment that our living room leak is not good but our crawl space is the problem. The consensus was that water seeped in from the foundation walls and during the hot, humid summer of 2018 is when we believe that started.”

So later in February, they moved out to live with family nearby and started trying to figure out how to remediate their home.

“The hard part is what do you do first and how much of that do you do,” said Earnie. “The only thing we had was from the doctor who was trying to help and give us leads.”

They were doing their own research and talking with family members. They got connected to a leading mold attorney Neil Bixler, who connected them with remediator David Myrick, who owns Valor Mold Removal in Virginia. He said he follows the standard for professional mold remediation, which includes setting up containment, negative air pressure and using the recommended removal techniques.

“They had mold all over their crawl space and so we had to come in and do what's called a dry ice blasting which is like sandblasting but it's using dry ice, where you throw dry ice at a high speed at the wood and it strips the mold right out. It's the most thorough method to strip mold out of wood but it's very violent and so it's only used for larger spaces,” said Myrick.

He often runs in remediators who don’t, who use shortcuts because there’s not legal requirement for them to follow the industry standard.

The General Assembly passed the Mold Remediation Services Act in 2008 that would have helped by requiring a mold remediators’ license to do work, but it was never funded and the act expired over the summer, so those licenses aren’t available. Myrick said instead, homeowners should make sure the remediator they hire has a contractors license.

Because of Kaye’s sensitivity, this has been a much larger project than what they usually tackle, taking well over a month just to remediate. Once that’s done, they will clean the house top to bottom so she can live at home again safely.

“It’s a little bit short of having your house on fire and all the contents burned,” said Kaye.

Mold can’t simply be cleaned. It has to be removed. So anything porous in the home has to be trashed, an everything else, remediated.

“We think about $130,000 and we’re retired so there is no extra money coming in and it’s going to disrupt our lives,” said Kaye.

That estimate is not including the around $20,000 in medical bills that were not covered by insurance. So they are taking things day by day. Since their story aired on WMAR-2 News, the Sylvester family had such an outpouring of support for them that their children created a GoFundMe to help them pay all their bills.

“I'm getting better. It's a very slow process,” said Kaye. “I cannot straighten my hands out. My hands are kind of crippled.”

She can’t even open a bottle of water. She’s going through a mold detox, on a restrictive diet and per doctors’ orders, she can’t have physical contact with people or go into public buildings.

“Because 40-50 percent of buildings have water damage. Water Damage equates to mold. Mold is what’s going to make me sick,” said Kaye.

“We look for little successes everywhere. Just a matter of being able to walk without a limp,” said Earnie.

As for their dream home, they hope to move back in by the end of the end and only time will tell if they can afford to stay.

“If we can make that work, we want to try to do that. We're still figuring things out,” said Kaye.

After all they’ve learned, they want to give advice to others that could have changed their lives.

“If you have a leak, you've got to get it fix right away. You can't let it go,” said Earnie.

“We thought we dealt with it. But just because the leak wasn't showing anymore, didn't mean that our problem was gone,” said Kaye.

Here’s a breakdown of Myrick said you should do if you find or suspect mold. He said don’t worry so much about the quick leaks. It’s the long-standing leaks like a foundation leak or a slow plumbing leak that cause a lot of mold issues.

“Don't touch it. Don't spray it with anything. Don't scrub it with detergent. Please don't tear it out. Don't put a fan on it or a dehumidifier on it because all these acts do is they tear the mold out and make the mold spores go air borne by the millions and you’re making the situation worse when you think you're helping,” said Myrick.

He said the next step is to call a certified industrial hygienist to test the air for mold.

“They'll find out how much contamination happened. There's this thing where people go, ‘I know that's mold. I'm not going to have it tested,’ and that’s really not what the test is there for… it's to test to see is it in the air already, what you guys are breathing in, and if it’s in the air, is it in this room only or is it in the surrounding rooms? Is it upstairs? That kind of thing,” said Myrick.

He said be careful about hiring a remediator to test the air because they are not independent.

“Are they just trying to make a sale or are they going to give you their honest advice?” said Myrick.

The next step is finding a remediation company that follows the industry standard. For instance, Myrick said his company’s projects take an average of two days and cost an average of $5,000. Myrick said ask to make sure the company you hire will set up containment and use negative air pressure.

“When we come into a remediation site and we're tearing out the mold, those mold spores go air borne and we set up this negative air machines and what these things do is they, as these particles are going air borne, the mold spores are being drawn into the machine and being filtered out of the room, which is critical because you don't want those mold spores to go into other parts of the house and cross contaminate,” said Myrick.

He said it’s also really easy to notice if the company you hired is not doing that.
“If you don't see this ducting going out the window, they’re not doing negative air pressure,” said Myrick.

He said another big question to ask the company is if the actual crew leader coming out to your job site has had any kind of formal training.

“A big thing that a lot of companies will do is the owner or the estimator will have formal trainings so they know what they're talking about but the crew leader just started a month ago or they just do what the boss tells them. They've never been formally educated because it's expensive to send guys through formal training,” said Myrick.

The last thing to be conscious of is if a remediator says they are going to paint over mold. They really should be sanding it.

“It's a pain in the butt. It's hard. It's elbow grease. It's laborious so what'll do is just paint over it with the paint and the mold test can't see it and it's a way of cheating,” said Myrick.

After remediation is finished, the last step is hiring an independent company to test to make sure the job is done.

“They go from like $600 to $1,500 and some of the best in the state are like $10,000 and so people see that price and they're like, ‘I can't afford that. I'm not going to hire them,’ but they are critical so if there is room in the budget, you definitely should hire them,” said Myrick.

Eanie jokes that there should be a ‘Mold for Dummies’ book because of how much there is to learn. His other tip on what to avoid:

“Somewhere in the contract that you sign with them [remediator] might be a clause about best effort to clean the mold, so you might use a certain company, they do the remediation, you go back and have it tested when they're done and there's still mold there and they say, ‘Oh we've done our part, that was best effort, we're done’,” said Earnie.