Six-String Soldiers have a mission through music

Through music they bring home back for veterans and people who serve. 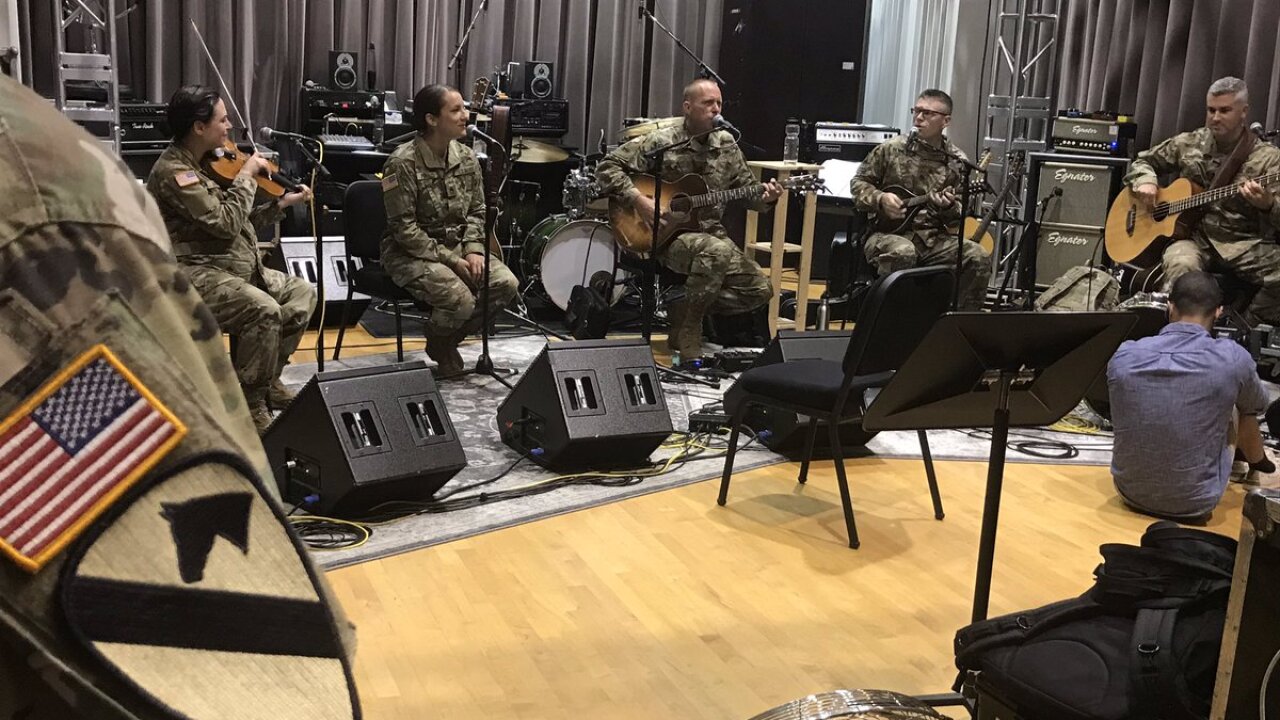 FORT MEADE, Md. — Through music they bring home back for veterans and people who serve.

Six-String Soldiers is a five member acoustic band based out of Fort Meade with over half a million followers on Facebook.

It's all strings and camo in this band, but they do let drummer turned guitarist Sgt. First Class Glenn Robertson keep one drum.

“That’s why I keep the flowers on it, keeps me rooted,” Robertson said.

The members of the band are all active duty military with a mission through music.

“We’re here to tell our stories as soldiers,” Robertson said. “We’re here to connect with our veterans and probably most importantly to hear their stories. Because what we do is so broken down they really have the opportunity to interact with us while we’re playing a show.”

Six-String Soldiers travel the country playing in veterans' homes, performing for organizations like the VFW, the VA and the American Legion.

“We’re going to go out to Cincinnati to perform with the Cincinnati Pops,” said Robertson. “We’ll be traveling to Albuquerque this weekend to perform for our good friends that are with the Gold Star Mother’s Foundation.”

The passion to protect the American dream is what drove them to serve.

“I went to college to study music so I knew that that’s what I was going to do,” Staff Sgt. Renee Bennett said. “In terms of service, both of my grandfathers served in the Army. One of them I never met, and he’s the one who played violin; I actually have his violin at home.”

During tours in brutal conditions fighting wars in places they've never been before, Sgt. First Class Brandon Boron fondly talked about how music helped him and his team members feel at home overseas.

“I was in the ambassador to Iraq’s living room in Baghdad with the commanding generals playing 'Sweet Home Alabama' and all that,” Boron said.

Even though they were fighting for different flags, Boron said his guitar helped to break down language and cultural barriers.

“I happened to have a little travel guitar, so you know we’re trying to communicate with these guys, and it’s kind of not going anywhere. We got out the guitar, we started playing music, and we were best friends. I still got a picture on my wall.”

Staff Sgt. Renee Bennett met her husband Joey Bennett through music when they were in college, and she came into basic training when he was deployed in Iraq.

Music brought the Bennett's together, and their future has the best seat in the house.

“This is the first grand-baby on both sides and our first child,” Renee said. “It’s a boy, and I'm, what, 17 days out from my due date today.”

Every member is an inspiration in their own way, and Renee couldn’t help but smile as she talked about some of the fans she interacts with.

“Being a female in the band, I’ve had a lot of girls, a lot of fiddle players, come up to me and be like, this is so cool. How do you do this job?”

She encourages young people that they can have a career in the Army, music, both or whatever they are passionate about.

“Your touching into those memories that they’ve associated with that song,” Renee said. “You’re bringing up all these things that are extremely personal to that person that you would never know if you just went up and talked to them.”

Protectors and performers showing there’s so much more to each soldier than meets the eye.

There's beat that flows from their hearts to their hands, stringing together those who serve and the people they protect.

To learn more about Six-String Soldiers and listen to some of their performances click here.