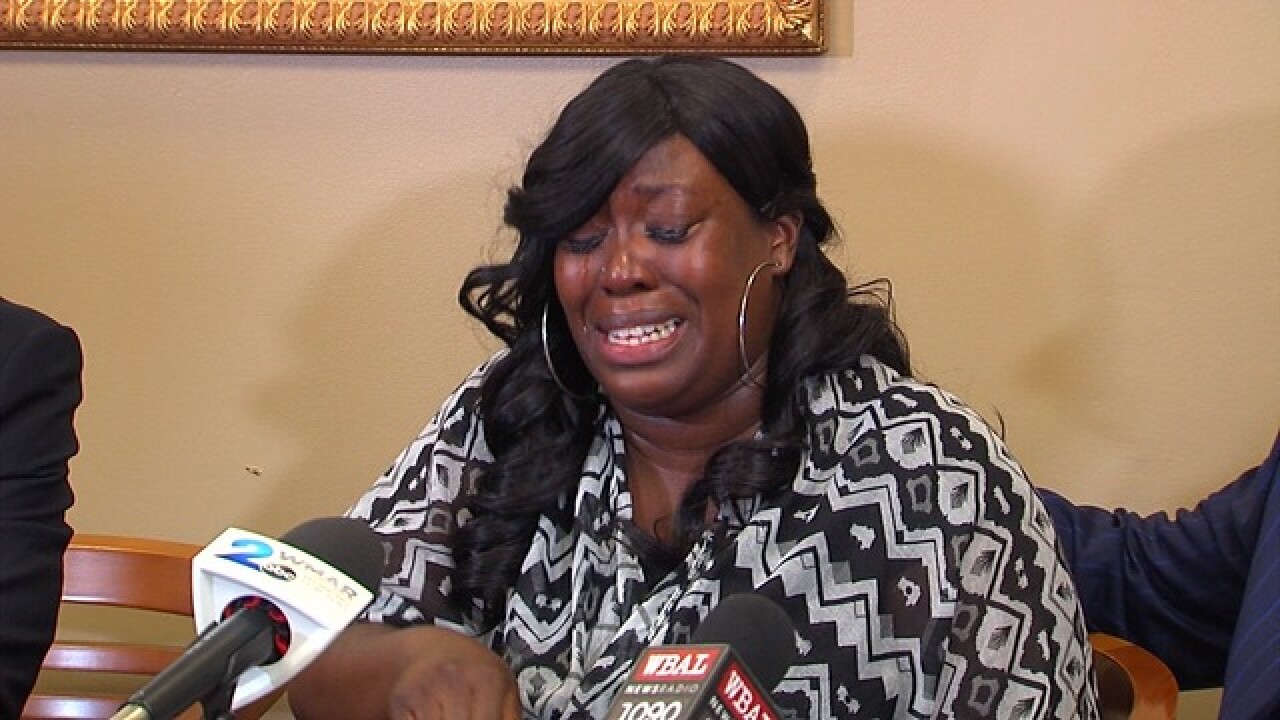 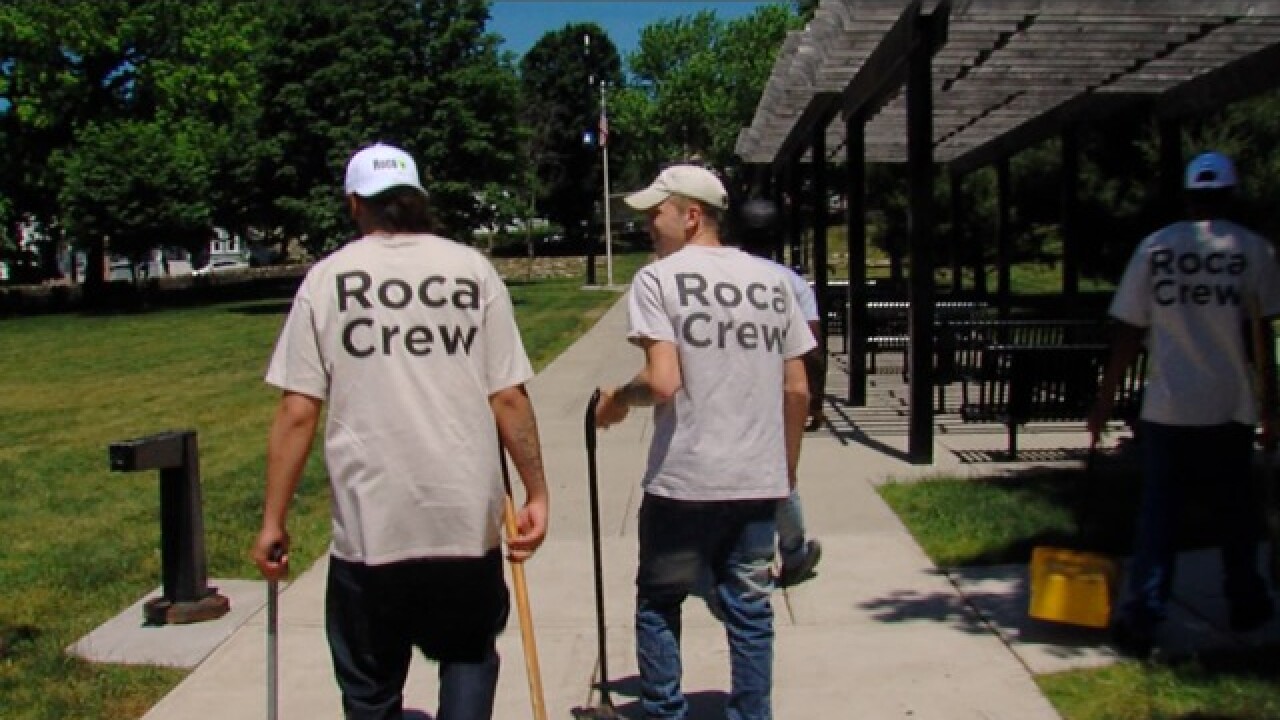 It’s 10:30 in the morning, Tamika Wilson faced more cameras than she ever has., flanked by her son’s two attorneys, prominent defense attorneys Warren Brown and J. Wyndal Gordon.

Nervous, ashamed, frustrated – the butterflies in Wilson’s stomach amounted to only tears as she came to grips that her and her son’s lives had changed forever.

Her 16-year-old son, Dawnta Harris’, face along with three other teens was front and center of the country.

The four were indicted for running over and killing a Baltimore County police officer.

“If they would’ve kept him, we wouldn’t be here,” Wilson cried, annoyed at both the courts and juvenile services department for continuously releasing her son.

For six months, Wilson said, Harris had been breaking into and stealing cars – out of his character, but behavior the single mom said she couldn’t control and sought help to resolve.

A ‘rock’ with potential for major ripple effects…

Around that same time, Molly Baldwin was back and forth from Massachusetts to Maryland – on a mission to bring a program she says could’ve saved Dawnta and those like him.

Several years ago, she realized the young people in the city where she grew up were in trouble

“Early on, we were really, really committed to working with a young group of people who had the hardest time. And so we began with young people who were on the streets and dealing drugs, and were in and out of gangs. A lot of young people were having children very early and also immigrants and refugees in Chelsea,” Baldwin said, referring to the initial days of the program she created.

Baldwin is the CEO and founder of Roca, Spanish for ‘rock’ – an anti-violence program instilling ‘rocks’ in the middle of cities desperate for its young people to find a way out.

When she started the program in 1988, she wanted to help at-risk young men and young mothers growing up in an area considered, at one point, to be the most violent city, per capita, in Massachusetts – Chelsea.

She found herself there after high school and planted roots shortly thereafter.

The stigma on the city, a stone’s throw from Boston’s city limits, no longer exists.

To know just how impactful Roca has become, a visit to Chelsea is a must and ride around town with two of Roca's youth workers, Dennis Platt and Jason Owens, two ‘Boston boys’ who have made changing and saving young lives their livelihood.

“That’s a kid there that as long as you keep him busy and don’t give him any down time when he’s in the building, he’ll stay from dusk ‘til dawn. Get him in there,” Owens said to Platt, referring one of the teens they’ve targeted to be one of the next Roca recruits.

Owens and Platt, as affable as they are candid, work on the front lines of Roca.

Unafraid of any teen, any circumstance, or for that matter – anybody.

“You’re never going to build a long term, trusting relationship with a young person if you’re not willing to go the extra mile and go out there with them, in his neighborhood, no matter where he is,” Owens said.

He and Platt do what Roca calls ‘relentless outreach’ – a gnat-like approach, ultimately breaking teens ‘walls’ of stubbornness down.

It isn’t just, to use their words, stalking young people.

A tried and true process that’s getting results…

It’s also groundbreaking data collection – reaching out to those who are most likely to face jail time, and using a tool these youth workers say have changed everything – Cognitive Behavioral Theory or CBT – methods that help both those at Roca and the young people in they work with understand the relationships between thoughts, behaviors, and emotions.

A sort-of problem-solving mentality that weighs risks and rewards and it’s been working.

While not a perfect science, the youth workers in Chelsea have turned the city around.

Crime among young people is at its lowest point in the city ever. A ripple effect that’s changing lives in and around Chelsea like 24-year-old Gage Morrow.

“I was about to get locked up for three and a half [years]. I met this guy Dennis – he was wearing a bright orange Roca shirt. And I’m not going to lie, I was scared. I’ve never been to jail before all of that. It was all new to me."

“My case, there was really no coming back from that. I had a home invasion case and it was at four in the morning which makes it ten times worse because it was after dark and honestly, I really didn’t see the light after that,” he said.

That’s how the programming works – giving young men a different outlet than a jail cell. It’s one that’s very bit emotional rehabilitation as it is a ‘school for life’ that starts with building relationships with courts, juvenile services, and police.

Chelsea Police Chief Brian Kyes, who started in the city a year before Roca began, says the program helped changed the way the city is perceived.

“I’m not ashamed to say that certainly organizations like Roca had honestly, probably, just as much to do with that. They’re in it for the long haul. I don’t think they’re really sprinters, they’re more marathoners and that shows,” Kyes said.

A marathon Baldwin says won’t be an overnight fix in Baltimore, but instead a journey of getting people to buy in.

“The narrow lane of ours how do we wrap around, in a very deliberate way, young people over a long enough period of time. Haul them out of bed, fall in love with them, and get them in to practice, practice, practice in programming and work through that CBT until they’re ready to change,” she said.

Getting a ‘big’ city to buy in…

As it stands, Roca has branches across Massachusetts; expanding to Baltimore will be the program's first time out of state.

Changing Baltimore’s most at-risk young people won’t be an overnight process those at Roca admit, but the program will go places, perhaps, others haven’t – making a believer out of the once skeptic Baltimore Police Major Lloyd Wells.

“I asked a lot of questions because I wanted to know, ‘are you serious? How serious are you? And are you here to help us,’” Wells asked those at Roca. “Because I want my young youth not to be in the predicament that we’re in right now and I can tell you…I was impressed.”

Wells majors Baltimore’s eastern police district – his second in the area considered one of the most notorious for crime in the city, especially among young men in their teens and early twenties.

He says Roca could be a game changer.

“We didn’t get in this situation yesterday. It’s not going to be fixed tomorrow,” Wells said.

James Timpson agrees. It’s why he left his post with Baltimore’s Safe Streets program to take on one of the leading roles in Roca's new venture in Baltimore.

In addition to that ‘let down,’ Timpson – who goes by JT, say the realities of Baltimore heavily affect its young people: from poverty, to gang culture and violence, to drugs.

“If I didn’t believe it, I wouldn’t be doing it. I really think that we have a unique opportunity here to bring something to Baltimore that is different, not completely different, but different in that really addresses some of the things that go unaddressed,” Timpson said.

And in a city not too different in terms of size and structure, addressing those ‘unaddressed’ traumas is what transformed people like Sulai Rosa, who cruises the streets of Boston daily.

“I was very street involved, I was gang-involved, court-involved. I pretty much ran the streets almost every day,” she said.

Rosa, who was once a Roca kid, is now a youth worker for the program and now she’s paying it forward.

It’s why Boston’s police department asked Roca to branch into their city.

“They were doing such a great job in Chelsea, we were like you’ve got to come to Boston. The opportunities to help these kids that nobody’s helping,” Captain Haseeb Hosein said.

He oversees Mattapan and Dorchester, neighborhoods he says at times, can be rough.

When Roca came four years ago, he could tell the difference almost immediately.

“They’re able to get into these kids’ heads and sell hope that ‘you don’t have to rely on this.’ There’s a pathway for you to get out of this nonsense and become independent, to become economically viable, to become employable. That’s what we’ve seen,” Captain Hosein said.

And because of relationships with Roca staff, this wrap-around approaching improving lives through job training, conflict resolution, and motivation is why Boston’s police department says Roca can work in a big city.

One young person at a time…

“We’re only as strong as the relationships we build. It’s having the kid of strong relationship with: probation, police officers, district attorneys, judges that we can do this wrap-around service. Because alone we can’t work,” Tha Thai, part of Roca-Boston, said.

“A lot of people have the stigma that these young folks can’t change. I believe different and actions take a lot of precedent over what happens next in their life,” Adrian Major, part of Roca-Boston, said.

Actions Major Wells, who’s seen what he calls a lot in his 23 years on the job, is standing fully-firm in his support of.

“Most of them say, ‘I do not want to be on this corner. I do not want to be doing this.’ So they’re all looking for the avenue. I think some is peer pressure to be there, some it’s, ‘I don’t know another way out. How do I get that step that way. If I fail, who’s going to pick me up,” Wells said.

Answers those at Roca feel as those they could field creating changes that might reach a teen headed down a path like Dawnta Harris’ – catching them before a wrong decision leaves a permanent mark.