Extending the life of the Hanover Street Bridge

The Vietnam Veterans Memorial Bridge is a historic yet aging span that connects Hanover Street across the Middle Branch of the Patapsco River in South Baltimore. Though the structure is about to get some much needed upgrades to its road surface, the long-term strategy for the bridge presents an expensive challenge for the city and the state.

As the Deputy Chief Engineer for the Baltimore City Department of Transportation, he’s familiar with the bridge’s classic architectural style and its much maligned roadway.

Better known as the Hanover Street Bridge, the span could serve as an allegory for the city in which it resides. A picturesque monument of historic design aesthetics, and a crumbling piece of urban decay. A pathway to future investment and growth, and a neglected and wanting piece of infrastructure.

Built in 1916, the 37-span arch bridge measures 2,290 feet and 2 inches in length and 72 feet in width. It was renamed the Vietnam Veterans Memorial Bridge in 1992, but the span connecting South Baltimore with Southwestern neighborhoods like Cherry Hill and Westport remains better known as the Hanover Street Bridge.

Already rehabilitated in 1970 and again in 1992, according to a Baltimore City Department of Transportation study, the bridge is due for another major overhaul. But the state of its roadway has grown so dire the Baltimore City Department of Transportation must make emergency stopgap repairs before a long-anticipated reconstruction project will carry the bridge into its next century of use.

“The Vietnam Veterans Memorial Bridge on Hanover Street is in dire need of repair, “ said Baltimore City Councilman Eric Costello. Representing the 11th District, his constituency includes the neighborhoods on the bridge’s northern end. He and fellow Councilman Edward Reisinger, whose district sits on the other side of the Middle Branch Patapsco River, the bridge’s southern end, have been pushing the city to act more urgently.

The bridge’s road surface is riddled with fissures and potholes, some deep enough to rattle the bones and expose car tires to jagged concrete and rebar, resulting in automobile damage and numerous flats, as documented in a February 2018 WMAR story highlighting the increased business the span gives a local tire shop in Federal Hill.

Responding to a litany of complaints from residents, the two local legislators asked for $5 million of emergency repairs to take place immediately. The request was made in a letter to the Baltimore Department of Transportation in February.

The city’s DOT responded at the end of that month, acknowledging the high cost and duration of large scale rehabilitation but stating a more immediate plan would take effect.

“The major rehab or replacement that is needed will cost well in excess of $100 million  and will take six to nine years,” Baltimore City DOT Director Michelle Pourciau said in a Feb. 23, 2017 letter to Costello and Reisinger. “Therefore, we have created an interim plan that is being deployed immediately to extend the useful life and address the most needed items. Construction will begin this spring when temperatures allow us to proceed.

The first step in this long process was scheduled to take place in July, but inclement weather scuttled those plans, twice. The DOT will make another attempt this weekend, from Aug. 17 to Aug. 20, completely shutting down bridge traffic for roughly 57 hours to resurface the length of the bridge.

“We’re in the first phase of a three-phase plan. The first phase is for a two-inch asphalt surface to be installed,” said Costello, estimating the cost of resurfacing at about $500,000.

The new asphalt should last two to three years, Costello said. “Phase two” will occur during the next year, as the bridge will be re-decked, at a cost of $7-10 million. That will extend the bridge’s life another 10 years.

The ultimate fate of the structure, though, will be judged in two upcoming studies, evaluating the bridge’s structural integrity and assessing the environmental impact of potential changes.

““The study that’s going on now sets the stage for coming up with a final solution, Pourcia said. “It’s a study that looks at different options.”

Khalid said the structural evaluation will assess “the super structure - all the steel frames and structure - the deck, the piers and abutments,” Khalid said, hoping to complete those studies in roughly 18 months. “Then we’ll look at some of the options for a permanent repair or permanent rehabilitation or replacement; if we can utilize the existing sub structure, and super structures and super impose a new bridge on it or not. Based on all these analyses we’ll make a final determination if this bridge can be salvaged and just do major rehabilitation work or do replacement work.”

Once the studies are finished, community stakeholders will be brought into the process and financing will be pursued.

“One of the major challenges of this is we’re going to heavily rely on state and federal budget dollars to make this happen,” Costello said. “We’re going to have to figure out how we’re going to program those over a multi-year period.”

Khaled ballparked the approximate costs for the project as between $70-80 million to more than $150 million if a full replacement is required.

“I think one thing that the city will need to work with the governor on, is whether this money will be a part of our allocation through the transportation trust fund,” said Delegate Brook Lierman, who represents Maryland’s 46th District, where the bridge is located. “I think it’s clear that we’ll need to start saving money over the next three years at the state level and the city level, in addition to whatever federal money we’re able to secure to rebuild this bridge.”

Click the picture below to see images of the Hanover Street Bridge’s deteriorating roadway: 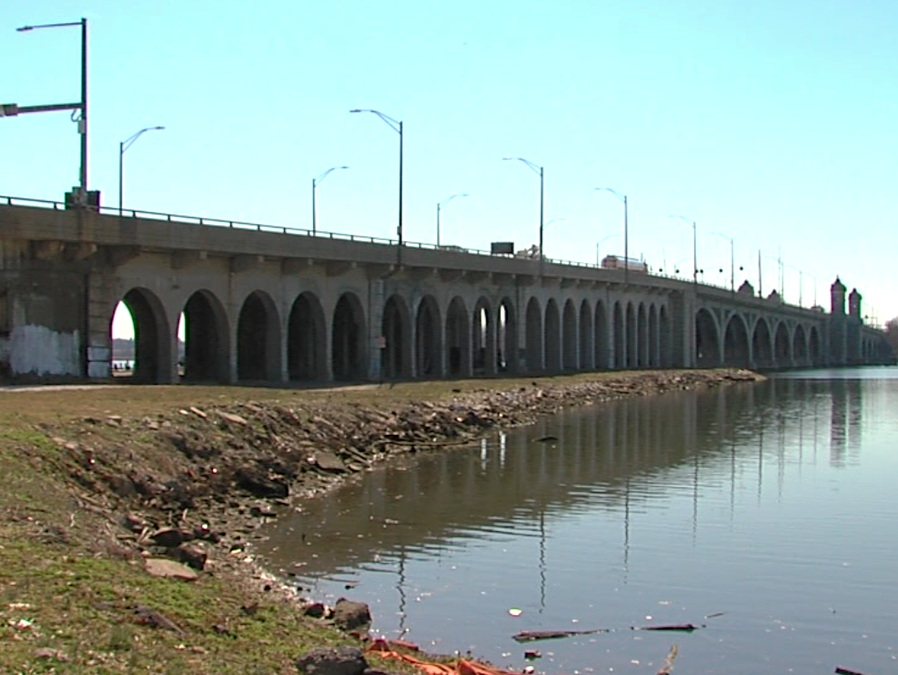 Additional plans to address pedestrian or bicycling access or landscaping projects to utilize the space under and around the bridge could also change costs projections. A newly-built bike path already meanders along Middle Branch Park, passing underneath the bridge’s arches.

“I think that most people recognize that we need to be ensuring that there are connected bike lanes and access from South Baltimore to Cherry Hill to Brooklyn and making sure that the Hanover Street Corridor has protected bike lanes and excellent, safe pedestrian access is a very important part of that,” Lierman said.

“The biggest elephant in the room is the funding source,” Khaled said. “Once we know we have the funding we can figure all those things out and get a really good timeline. My target, our target, is sometime in 2023-2024 time frame we hit the ground rolling in terms of a permanent fix.”

Beyond addressing a prominent infrastructure issue in the city, the bridge project provides a chance to take advantage of an architectural gem that serves as a southern gateway. For frustrated residents who commute through Route 2 or live in the neighborhoods on either side of the Middle Branch Patapsco River, it may be a benchmark for the city and state’s responsiveness and capability.

“We need folks to have a restored sense of faith in government’s ability to do basic things like keeping the bridge maintained,” Costello said. “We have a three-phase plan to get this done the right way and keep it safe throughout the duration of that. To me that’s what’s most important here.”