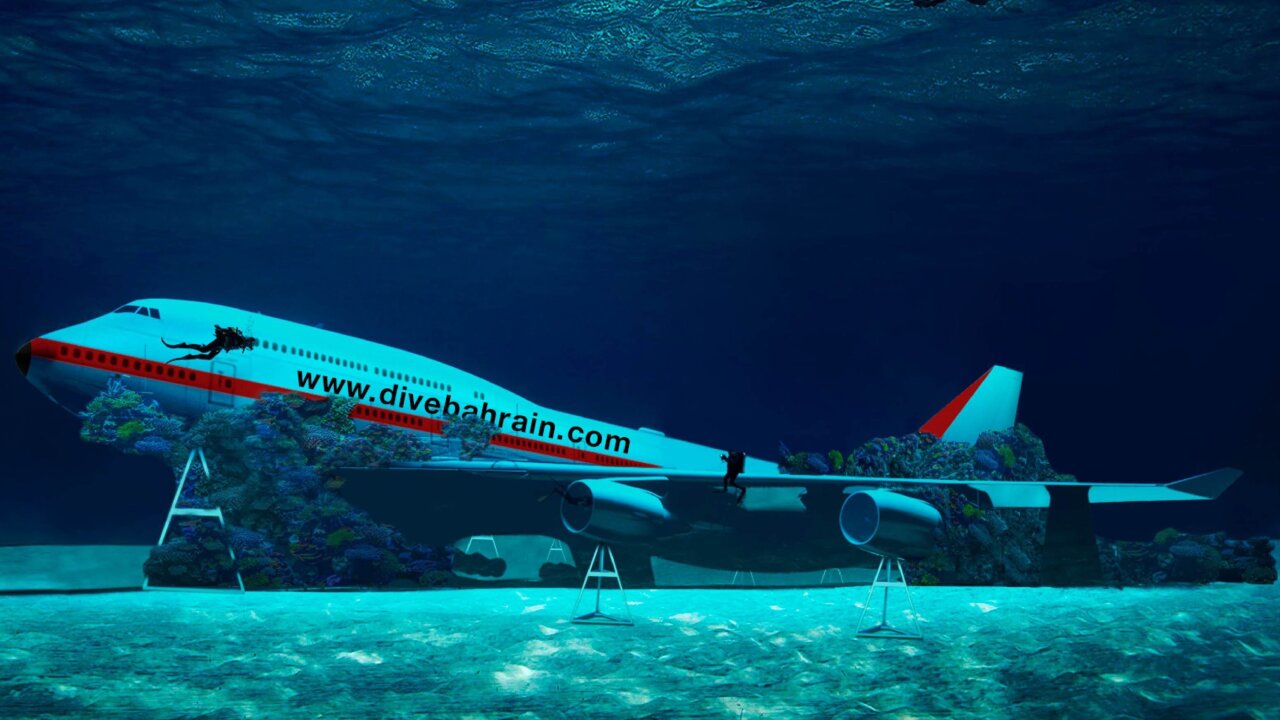 BAHRAIN — A vast underwater theme park spanning 100,000 square meters off a Bahraini island city and featuring a sunken Boeing 747 is to open in August, the Persian Gulf country has announced.

Bahrain is hoping to attract divers from across the globe with the expansive site off Diyar Al Muharraq, a city which sits across seven artificial islands. Billed as the world's largest underwater park, its centerpiece is the decommissioned, specially prepared aircraft.

Such a feature might be of dubious taste -- but that hasn't deterred the project managers.

The 70-meter-long plane is "the largest ever to be submerged," according to Zayed bin Rashid Al Zayani, Bahrain's minister of industry, commerce and tourism.

The subaquatic project is the product of a partnership between the Supreme Council for Environment, Bahrain Tourism and Exhibitions Authority (BTEA), and the private sector.

Residents and tourists will be able to book trips through licensed diving centers by August 2019, Al Zayani said on Monday.

"We are proud to launch this unique eco-friendly project," the minister announced .

But marine specialist Adriana Humanes , who has a PhD in Marine Ecology from James Cook University, Australia and is currently based at Newcastle University in the UK, says that artificial coral reefs are not always ecologically sound.

"Wreck diving is one of the oldest methods used to construct artificial reefs by providing a structure to marine sessile organisms and fishes."

Humanes says that wreck diving provides "unique, diverse and intriguing diving experiences" -- but clarifies that there may be downsides.

"Their materials -- copper, copper alloys, aluminum, lead and steel, petroleum hydrocarbons and other potential pollutant -- can be subject to corrosion, [passing] heavy metals into the seawater and affecting the surrounding marine organisms.

"Corrosion will also lead to the subsequent loss of structural integrity, potentially affecting marine life living in the area or becoming a safety threat to visitor divers."

The Bahrain Tourism and Exhibition Agency said the aircraft will be specially prepared before it is lowered into the water.

"All aircraft surfaces will be subjected to a high-pressure wash with bio-friendly detergents to ensure all post-production coatings, oil and grime are removed," a spokesperson told CNN Travel.

"Furthermore, a vast amount of time has been spent removing contaminants from the aircraft. This has included removing all wiring, all hydraulic, pneumatic and fuel systems, and all adhesives, insulation, plastics, rubbers, chemicals or other potential toxic substances."

Bahrain's proposition is not the first time an airplane's been deliberately sunk to create a diving attraction.

In the United States, a Boeing 727 jet was sunk off the coast of Miami in 1993 . It was damaged during Hurricane Gordon in summer 1995.

Meanwhile at Mermet Springs in Illinois, a Boeing 727 that featured in the 1990s movie "U.S. Marshals" now lies below water and forms part of a popular diving site.

Over in Canada, divers can explore a decommissioned Boeing 737 in the Stuart Channel near Chemainus, British Columbia.

In Turkey, an Airbus was lowered into the waters off the Aegean coast a couple of years ago to become an artificial reef.

The upcoming Bahrain underwater park is also part of a wider trend for underwater tourist attractions. From the Maldives' underwater hotel -- where you can enjoy the marine view without getting wet -- to America's underwater museum , located off the coast of Florida, where divers can explore striking statues and sculptures.