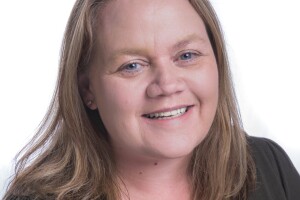 What is your job?
I am the News and Digital Director here at WMAR. I am responsible for leading the teams that produce content for all of our broadcast platforms, as well as social media. I am often the person answering your emails as they come in as well as Facebook messages. I am responsible for bringing new talent to Baltimore, for on air and behind the scenes. I have built a team that values the Baltimore community and works every day to make it better.

When did you start working here?
I joined WMAR in March of 1999. I started as a Producer of our 6pm newscast, eventually produced the 5pm news before becoming an Executive Producer. I was promoted to News Director in June of 2009.

Where else have you worked?
I started my career in journalism at Fox 43 in the York, Harrisburg, Lancaster market. But if you want to go way back, I worked my first job at the Harford Mall in Montgomery Ward, just like my mother did.

Where did you go to college?
I went to Harford Community College for 2 years and got my Associates degree before transferring to York College of PA to get my Bachelor's in Communications.

What are some of the biggest news stories you have covered or led coverage of?
The Baltimore riots after the death of Freddie Gray. Several blizzards, a derecho that wiped out more power to people in Maryland than previous hurricanes. I've covered tropical weather and was sent to Florida to help during Hurricane Irma. I was in Naples when the eye passed overhead. I was also in the newsroom the day a truck crashed into our building here at WMAR. A terrifying day where we found ourselves the news, while trying to report the news. I am still incredibly grateful everyone was safe that day.

What is your philosophy on news?
I believe local news is what brings communities together. I remember, growing up here, the people who were on my local news and who influenced me, without even knowing it, to go in this direction. I believe our job is not only to bring the facts but also bring you a true reflection of the community. There is bad, but there so much good. There needs to be perspective and time needs to be dedicated to giving you the full story.

What do you love about living here?
I love seeing my friends and family share the stories we produce. I really love when they come to me with story ideas and we get answers for them. It's great to be valued in the community, but also to be able to make a difference where you grew up.