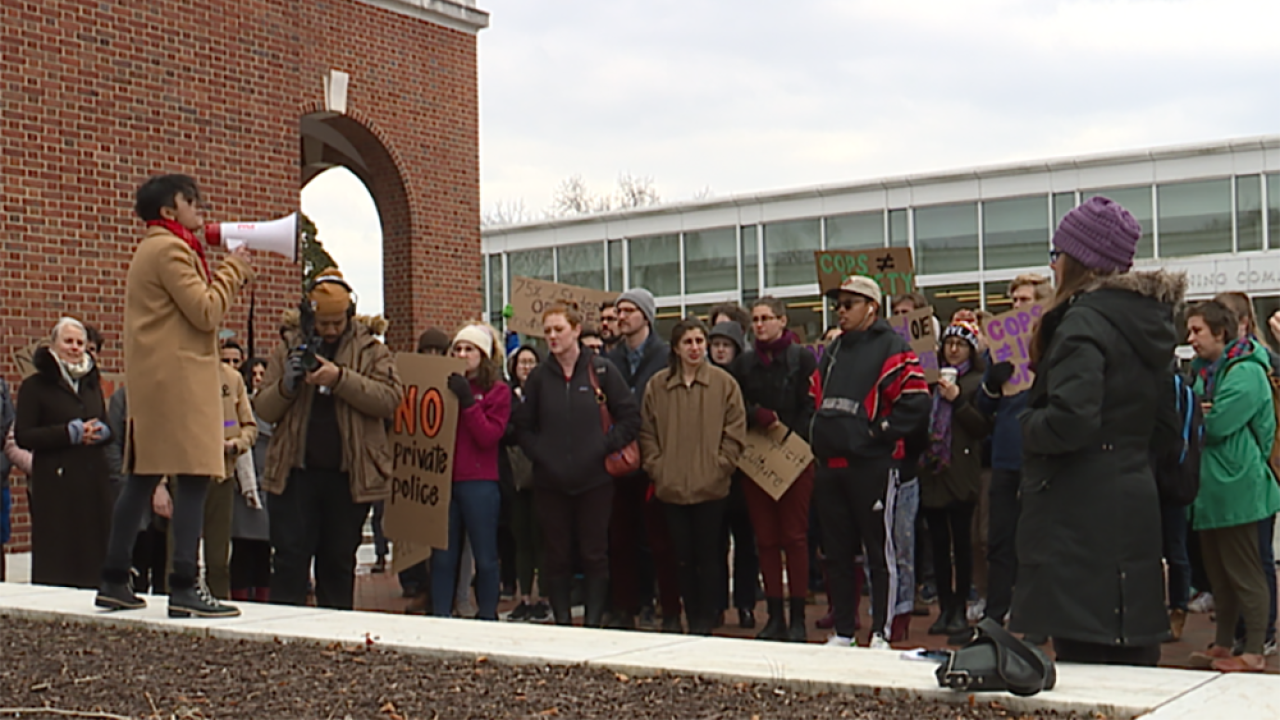 WMAR 2 News
Students gathered at Johns Hopkins University&#39;s campus to speak against the creation of a private, armed security force for the school. (WMAR 2 News photo)

BALTIMORE — A student protest against the creation of a private Johns Hopkins police force, as well as opposition to the school’s contracts with Immigration and Customs Enforcement, or ICE, ended May 8 with the arrest of seven.

At the request of the University, the Baltimore Police Department broke-up a 36-day sit in at Garland Hall, an administrative building on the school’s University Parkway campus. The proposed private police force would patrol that campus, as well as the school’s hospital and School of Public Health campuses in East Baltimore, and the Mount Vernon campus of the Peabody Conservatory.

Despite the prolonged protests of some students and community members, a bill authorizing a private Johns Hopkins police force successfully passed the Maryland General Assembly during the 2019 session.

The push back however, continued beyond when the legislation passed, through April 3 when the sit in began with participants demanding to meet and negotiate with Johns Hopkins President Ronald Daniels and his administration.

On May 1 the sit in reached a boiling point, with protesters overtaking Garland Hall, and forcing the evacuation of University employees and students.

This prompted Daniels and his administration to write a May 5 letter to protesters, hoping to arrange a meeting the following day to discuss their concerns and issues:

We are writing to follow up on Friday’s offer to meet with student protesters who have been occupying Garland Hall over the past few weeks. To solidify our commitment, we will be available to meet at 9:30 a.m. tomorrow (Monday, May 6) at FastForward U (320 W 29th Street), to discuss the substantive issues you’ve raised and your request for amnesty. This meeting invitation is extended in good faith to any student protester who has or is willing to leave the occupation shortly. You are welcome to bring members of the student News-Letter with you, and we are happy to support transparency by broadcasting the meeting through university live stream. The meeting can accommodate 30 to 35 students. We would request RSVP to Student Affairs. We look forward to having a productive conversation.

According to the University, their efforts were rebuffed, prompting President Daniels to send the protesters another letter, this time offering amnesty to those participating, if they ended the sit in:

We were disappointed to receive your message last evening and wish to again request that you work with us to bring an immediate end to the occupation of Garland Hall. Forcible occupation of a University building is not merely a disruption, it is a violation of criminal trespass law and University policy which presents health and safety risks, and takes a toll on the entire community. Among many other impacts of this now 34-day occupation are the dislocation of services that are truly critical to your fellow students – including disability services, financial aid, academic advising and international student visas. We fully recognize the strength of your conviction on issues that are important to you, but believe that repeatedly restating an entrenched position on the occupation makes forward movement virtually impossible. We made an open-ended offer to meet over the three-day weekend, and have been engaging in significant efforts to reach each of you directly and through family, friends, or mentors. We are worried that the current state leaves little opportunity for coming together. Despite the fact that you did not respond to our meeting invitation for yesterday morning, we came to the meeting and waited for you to join us in the hopes that you would take the opportunity to engage in constructive discussion. We offered a meeting with no conditions, and included an explicit commitment to discuss not only the issues of concern to you but also the question of amnesty, in an entirely open, livestreamed forum and with the student News-Letter present. On the issue of amnesty, we are taking the extraordinary step of extending amnesty to protesters who are willing to end the occupation and leave Garland Hall. To that end, we are attaching a document laying out the specific terms of the University’s extension of amnesty in this circumstance. We extend this in good faith with the aim of urgently ending the occupation of Garland Hall. Let us repeat: we remain committed to continuing conversation with you and our entire campus community about critical issues, but our immediate priority must be the unsafe conditions in and around Garland Hall. We implore you to vacate Garland Hall and rejoin the university community.

The following day, the sit in continued at which point the University decided to call in Police and other City resources for assistance. Shortly after the decision was made, President Daniels sent a message to students, faculty, and staff explaining their reasoning:

We made the difficult decision to call upon local fire and police personnel to help our university bring an end to the lengthy occupation of Garland Hall by students and outside activists, a situation that had become increasingly unsafe. Over these past five weeks, the university made every effort to accommodate the underlying protest because we hold so firmly to the belief in free expression. But what began as a demonstration against university policies in recent days took a turn, as students and outside activists chained the doors closed, blocked exits and entrances to the building, harassed and intimidated our staff, and physically prevented fellow students from receiving essential services. This was no longer a peaceful show of civil disobedience, but instead a forcible occupation of a university building in contravention of the law and university code of conduct. In the intervening days, we worked around the clock to bring the occupation to a constructive conclusion. We made open-ended offers to meet and provide amnesty to our students. We also undertook an intensive effort to communicate with student protesters, directly and through their families, friends, and mentors. While some student protesters were receptive to these overtures, others regrettably were not. Invoking the help of law enforcement in ending an occupation involving our students is—and must always be—a last resort, one that we took today only in the face of mounting safety concerns and untenable disruption of essential student services and university activities. Our job now is to redouble our efforts to forge connections across even seemingly intractable divides, working together to create opportunities for genuine dialogue, and to deepen our understanding of the important issues we face as a university. We are truly grateful to everyone in our community who strives toward those ends and who worked diligently and selflessly to bring us to a safe resolution today.

Tuesday, a group calling itself “the JHU Garland Occupation,” released a statement sent to the University President, disputing the school's account of attempted negotiation, and expressing disappointment with the decision to call in the Baltimore Police Department:

Thank you for your recent continued efforts to engage in productive dialogue. However we are disappointed with your decision to end the occupation with a police raid and arrest rather than with the peaceful negotiations that we have been in the process of scheduling. We appreciate the offer of conditional amnesty made in your May 7, 2019 correspondence. We remind you that our reply, sent shortly before the raid, reiterated our desire for negotiation and requested clarification regarding this offer of amnesty. Given the recent developments, we again request clarification about the terms and conditions of the academic, professional, and legal amnesty. Additionally, it is unclear what is meant by extending this invitation to students who have “voluntarily” left Garland Hall. During the raid, City of Baltimore workers were dispatched alongside police officers and erected metal barricades around the perimeter of the building, preventing access. Officers gave dispersal warnings and threatened arrest to anyone on the inside of these metal barricades. To us, this appears to provide very limited room for interpreting voluntary withdrawal from Garland Hall. We kindly request clarification on this matter.

The group closed out the letter by setting out a list of demands prior to a possible May 21 meeting:

One two-hour meeting is not an adequate period of time to address the substantive concerns about campus militarization raised by SAPP, Hopkins Coalition Against ICE, and the JHU Garland Occupation for over a year. We are, however, more than happy to engage in a two-hour meeting as an overture to a longer process of negotiation which follows the terms we have previously requested. To reiterate, these terms include: 1. A widely publicized live audio transmission of the meeting, which will remain accessible in its entirety after the initial broadcast to ensure transparency; 2. A university-wide email announcing the start of negotiations, approved by us before its distribution. Please clarify in writing that you agree to these conditions. While the advance notice is welcome, the proposed meeting date of May 21 is more than a week away. We would think that given the importance of these issues your office would have made these meetings a higher priority. Nevertheless, we accept your offer to meet on May 21. To that end, please provide us with a range of potential start times. We suggest times that will allow President Daniels and Provost Kumar to attend the School of Engineering’s Master’s Diploma Ceremony (10.00am) and Doctoral Hooding Ceremony (3.00pm) scheduled that day, should their presences be expected at these formal events. We will send a delegation including informal advisers. We additionally request that a list of attendees be sent and that this meeting address the form that additional meetings will take. We will update you with any further details nearer the meeting date; we expect that you shall do the same. We look forward to the start of a process of productive discussion.

Prior to the May 6 meeting, that the protesters no showed, the University agreed to conditions similar to the group's first demand.

The University has not formally responded to the groups letter, but a University spokeswoman say a tentative date of May 21 has been set.