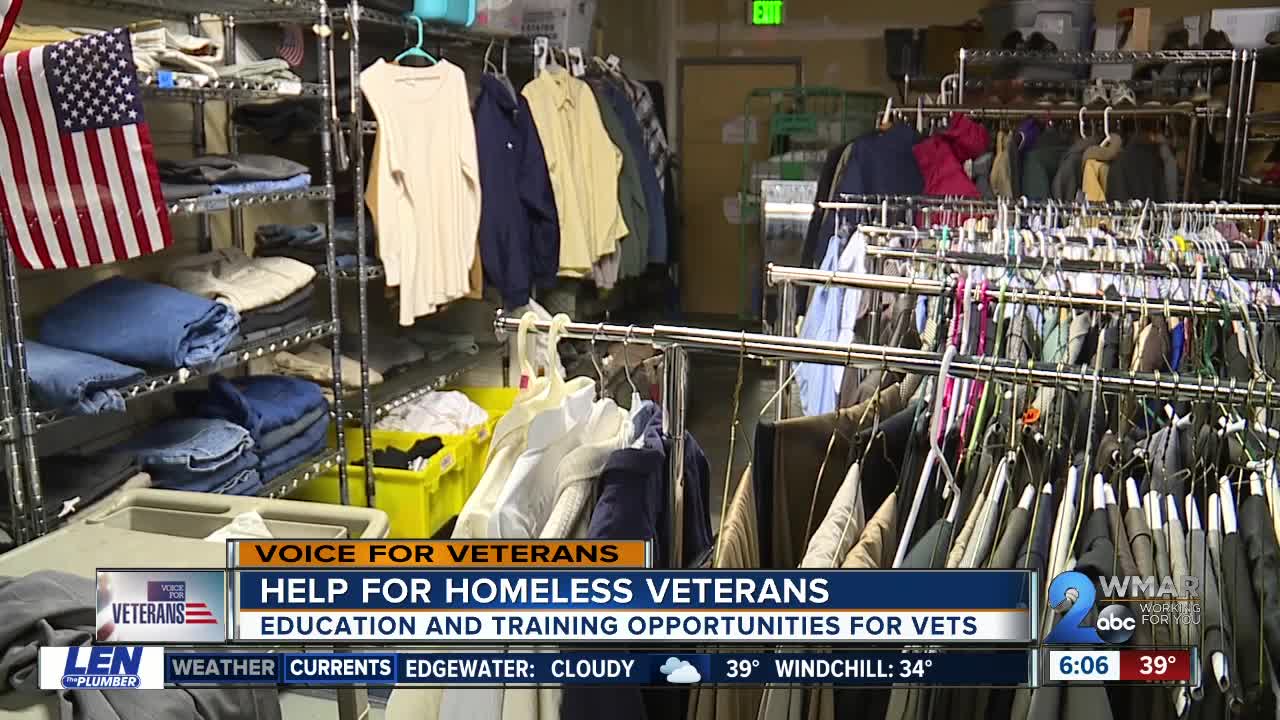 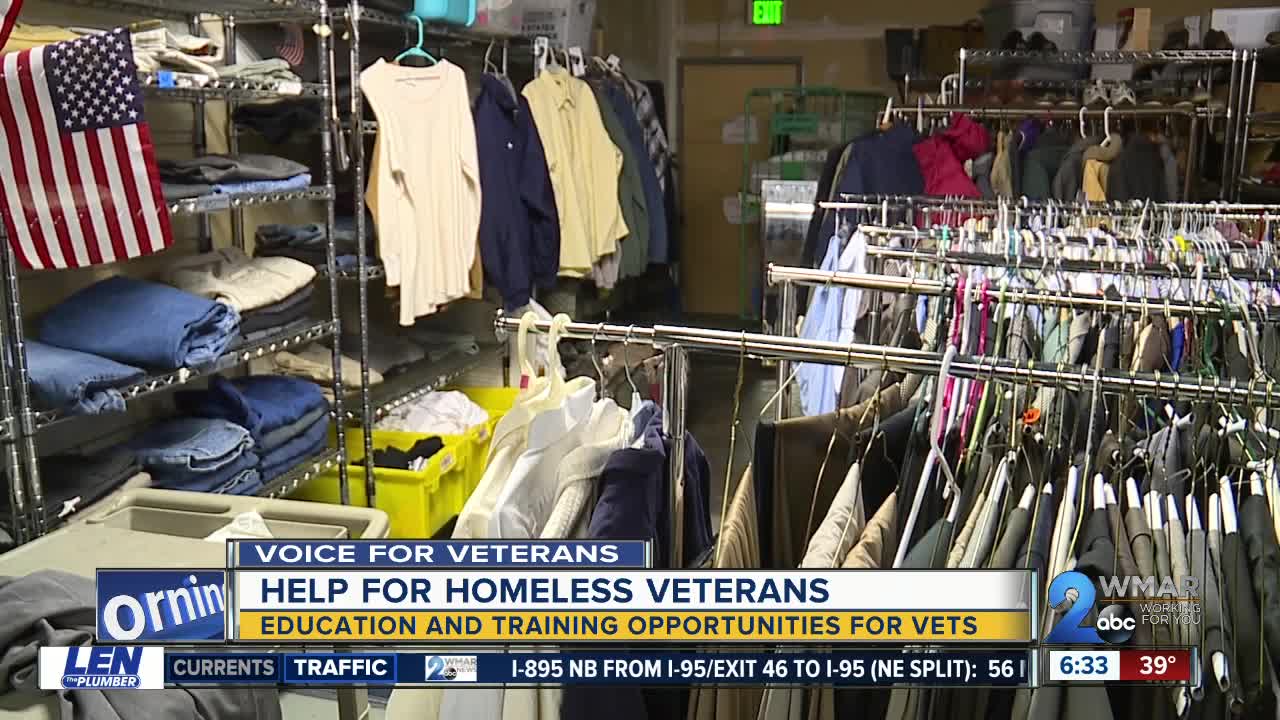 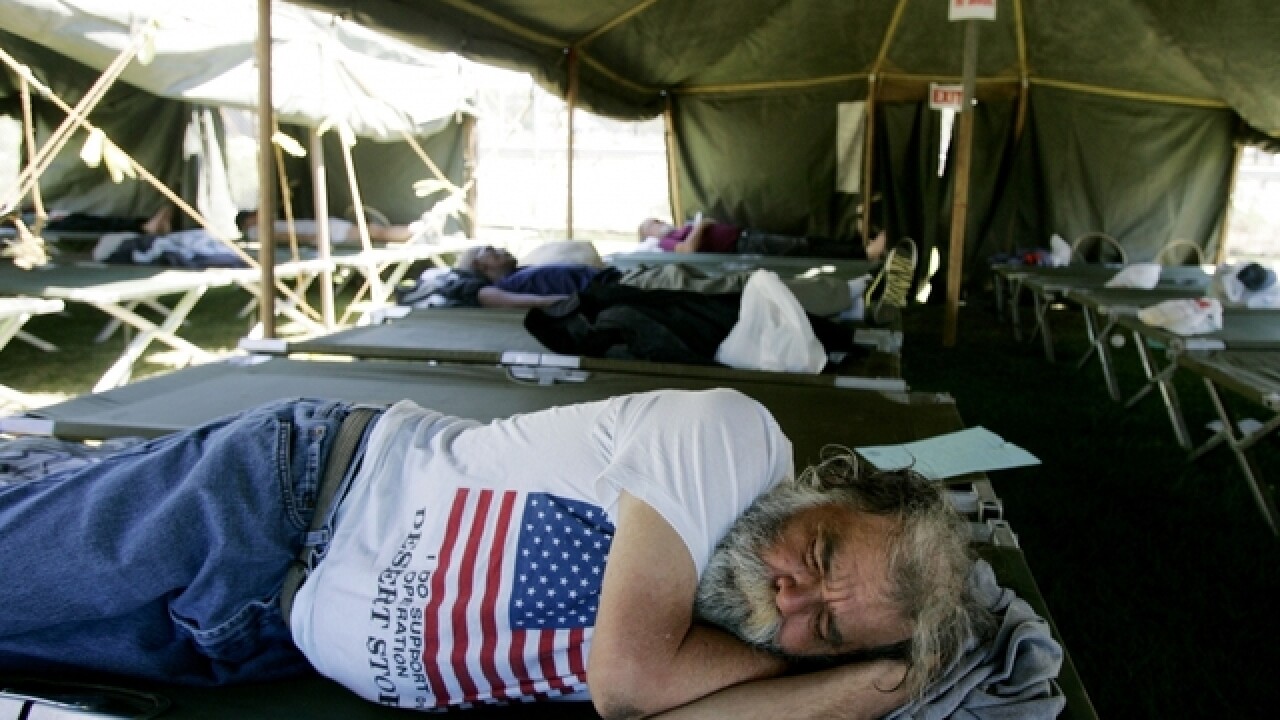 BALTIMORE, Md. — Asking for help might difficult for some men and women who’ve already given so much to serve our country.

WMAR 2 News visited a national support program located in Baltimore which helps homeless veterans get their lives back on track.

The Maryland Center for Veteran and Education Training (MCVET) accepts homeless vets, both men and women, from anywhere in the U.S.

MCVET’s mission is to get them back on their feet with a job and a place to call their own.

From rows of shoes lined up in formation to hospital corners folded to perfection, the first sleeping quarters homeless veterans receive at MCVET looks like familiar territory with a familiar name.

MCVET executive director Jeff Kendrick said “First Platoon is like a culture shock for people who have not served, but for men and women who have served in the military, it’s like taking them back to basic training.”

First Platoon is place for vets to lay their heads at night, while during the day, vets in the program or those just checking it out can meet, talk, or just hang out.

MCVET First Platoon leader Shawn Dogget said “we’re a unit, we’re truly a unit. We work together, we eat together, we conversate [sic] together, we do almost everything together as a unit.”

Serving in the military can open up a world of opportunity, but for some vets, the transition back to civilian life can lead them to a place they never expected…homeless and out on the streets.

MCVET is a support program run by vets for vets.

Kendrick himself served in the U.S. Air Force.

“I could have been a person that ended up homeless myself but I had a lot of strong mentors while I was in the military. I took advantage of a lot of the services that were offered to me, so I really think that had there been a slight misstep with myself, I could have probably ended up in the same situation,” Kendrick said.

Doggett served in the U.S. Army and is getting the help he needs at MCVET.

“I am a recovering addict, I suffer from the disease and my life had become very unmanageable. I almost lost everything, including my life, my self-respect, and coming to MCVET has allowed me to gain more than what I lost,” Doggett said.

Doggett entered the program in march 2019, and found something familiar to all veterans.

It’s so much like being back in the military that Doggett has earned the leadership position of First Platoon leader.

“Came in March 25th, I transitioned to phase 2 of this program on June 4th. Ibecame the leader of this platoon. They saw something in me, some leadership skills and they asked me to be the leader and gladly accepted, and I haven’t looked back since,” Doggett said.

“I’ve experienced being at rock bottom, and I know how that feels. If I can help in any way to get people from that bottom, that emptiness, that loneliness, because I once was there not too long ago, and anything I can help with that is joy to my heart,” Doggett added.

Kendrick points out another place at MCVET where vets can share stories with others who know what they're going through, as well as get a shave and a haircut is the program's own barbershop.

“Some guys come in with just the clothes on their back, haven’t shaved, haven’t showered, haven’t had a good meal. The barbershop just takes them back to that humanistic approach that one day before you fell on hard times, this is how I used to look,” Kendrick said.

To complete their look and help vets dress for success, MCVET provides a space affectionately called The Mall.”

“A person comes in with just the clothes on their back, but now they have an opportunity to go to 'The Mall,' help themselves to underwear, toiletries, clothes…by the time a man leaves here, he’s got a couple suitcases full of clothes,” Kendrick said.

Doggett has been at MCVET for about eight months and hopes to leave the program a success with a few things in hand.

“I would like to have keys to a house, maybe have a couple thousand dollars saved up, and have a secure employment,” Doggett said.

“What I ask employers to do is take into consideration those men and women have served this country, put them to the head of the class, in terms of when your looking for employment. They deserve that spot. Take the time to find out what they’ve done, and if you have those spots available, hire a veteran,” Kendrick said.

The value of helping veterans like Doggett get their lives back on track is priceless, and at no cost to vets.

“Everything they get is free, from three meals a day, to the services they receive upstairs, to the case managers they see, employment services, in line with the housing, they pay nothing. What they do, they’ve already paid. What we’re saying is now you come in here, now lets give back to you,” Kendrick said.

MCVET offers more than just a place for vets who’ve fallen on hard times to connect with others.

It also provides the basics necessities of food, clothing, and shelter for those who need it, not to mention tuition assistance and help with their military benefits.

Kendrick says his team of social workers and case managers also address the root problems which brought each veteran in the door.

“We do drug and alcohol treatment here, we do meetings. Whatever particular issue that brought that veteran in the door, we address that first,” Kendrick said.

“We then put them with employment counselors, the final step is we find permanent housing for them, so for us, take care of the problem, address the problem, then offer the employment and then the housing,” Kendrick added.

It means MCVET's mission is accomplished.

“For me, it’s a great feeling knowing that a man or woman who served this country, homeless when they come in the door, but no longer when they walk out the door, so i get a really good feeling on that,” Kendrick said.

“It saved my life,” Doggett said.